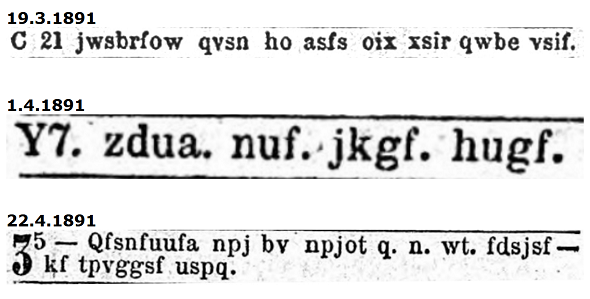 Blog reader Didier Müller has found numerous encrypted newspaper ads in an online archive and created an online database for them. Who can support him with further finds and solutions?

Until a few weeks ago, I knew that there were once scrambled newspaper ads in the French press, but I was not aware of a specific example. In a blog article at the beginning of May, I therefore asked my readers for advice and was not disappointed.

Thanks to a tip from Thomas Bosbach, a few days ago I was able to present several encrypted ads from France, described in the book “La Bible des codes secrets” (2019) by Hervé Lehning. For two of them I did not know the solution.

A few more tips came from Didier Müller from Switzerland. Didier runs a very interesting French-language crypto website and is the author of the book “Les codes secrets décryptés”, which you can download for free as a PDF.

Didier also deciphered the two unsolved ads from my aforementioned article. One of them was encrypted with a combination of Caesar and vowel substitution, the other with a pure Caesar encryption.

Already in my article from the beginning of this month I pointed out that the French newspapers “Le Temps” and “Le Figaro” run online accessible archives, where also encrypted ads could be found:

Unfortunately, I did not find any.

But Didier Müller found one in the Figaro archive. He reported about it in a comment to my article.

And not only that: In the meantime, Didier has set up a database accessible via his website, in which he collects coded newspaper ads from France. It already contains 188 examples! To see them all, you have to click on “Afficher les petits annonces”. You can also search by date or letter combinations.

Didier has already solved many of the ads. In all cases, they are letter substitutions. Other ads are still waiting to be deciphered.

An unsolved series from 1875

Let’s look at a series of still unsolved ads from Didier’s database:

As can be seen, the alphabet used consists mainly of numbers between 0 and 24. Occasionally, the higher numbers 41 and 57 can also be found. This suggests that each number stands for a letter.

Can a reader decipher this cryptogram series?

No question, the database Didier has set up is an exciting project. I am curious to see how many more encrypted ads he will find and what methods will come to light.

Perhaps a reader would like to help Didier find more ads. Didier will certainly also be happy to receive solutions to the existing ads.

Further reading: Can you decipher five encrypted words from a 1891 newspaper advertisement?