StartseiteCipherbrainEncrypted newspaper ads: A terrific lecture and a new mystery 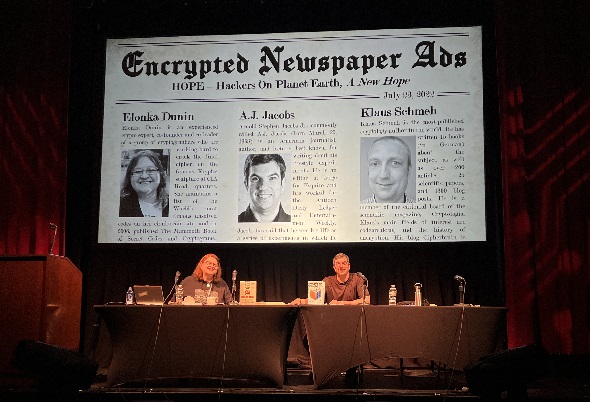 Encrypted newspaper ads: A terrific lecture and a new mystery

At the HOPE hacker conference in New York, there was a presentation on encrypted newspaper ads. On this occasion, I would like to present one that a reader recently sent me.

As I reported three months ago, I am proud that the US bestselling author A.J. Jacobs has mentioned me in his book “The Puzzler”. The contact came about through Elonka Dunin, who is also mentioned in this work. I am also pleased that A.J. Jacobs has named the book “Codebreaking: A Practical Guide,” which I co-wrote with Elonka, as one of the top five puzzle books on a website. Joining me on that list are authors such as Martin Gardner and Douglas Hofstadter, who may be familiar to many Cipherbrain readers.

A lecture in New York

Since Elonka, A.J., and I are interested in the topic of codebreaking, the idea came up for us to give an online talk together on the ICCH forum. The topic was quickly found: encrypted newspaper ads. These play a role in A.J.’s book, as well as in the aforementioned “Codebreaking: A Practical Guide”. And last but not least, I’ve blogged about encrypted newspaper ads quite often on Cipherbrain.

The content of the talk and the PowerPoint slides were mainly taken care of by me. Elonka, meanwhile, managed to fit the talk in additionally at the HOPE hacker conference in New York, where A.J. lives. HOPE is the most important hacker conference in the world. It’s not easy to get in as a speaker, but luckily Elonka is no stranger to the scene. 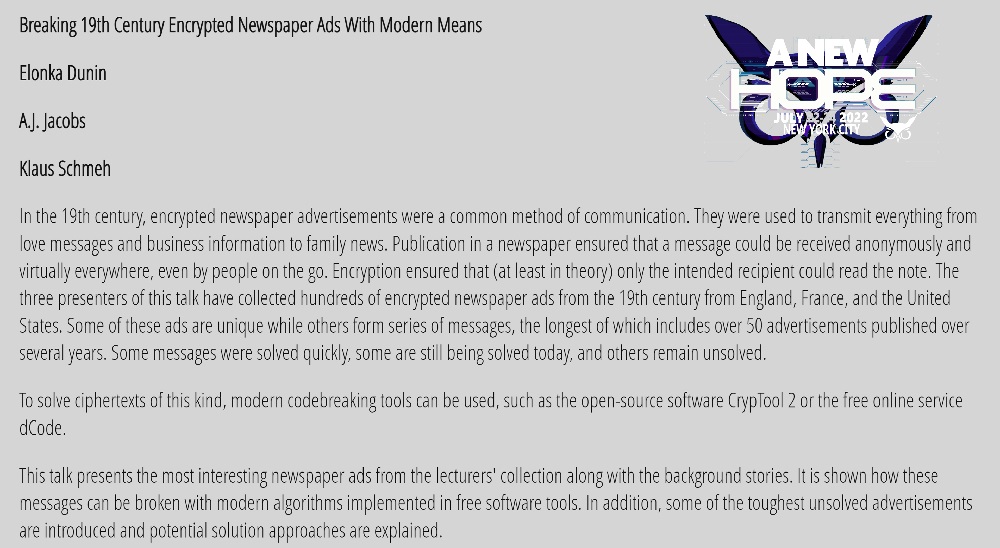 The individual topics of the lecture might be familiar to Cipherbrain readers. It was about encrypted newspaper ads from England, as they can be found in the book “The Agony Column” by Tony Gaffney, as well as similar ads from France, as they can be found on the website of Didier Müller. We also included the Gun-Wa cryptogram and the ads of the detective Ignatius Pollaky.

I also found particularly fascinating the story of the British navigator Richard Collinson, who set out in 1850 to discover the fate of his colleague John Franklin and his crew. Franklin had launched a voyage of discovery in 1845 to find a sea route from the northern Atlantic to the northern Pacific, known as the Northwest Passage. The Franklin expedition disappeared without a trace in the polar islands of northern Canada. Collinson’s expedition was only one of many searching for Franklin and his men, and it was a long time before the whereabouts of the missing were halfway determined. There were no survivors. 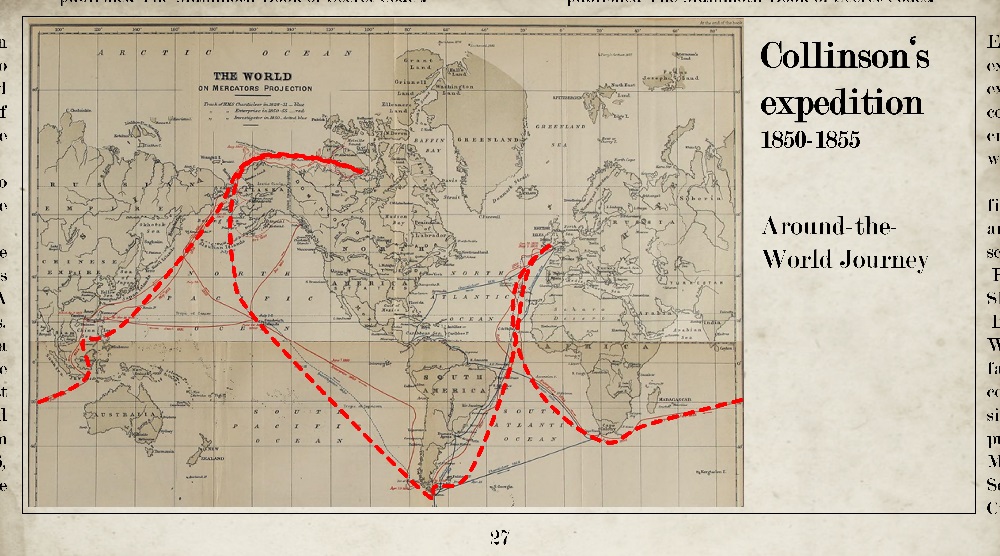 Unlike Franklin, Collinson and his men returned to England unharmed. As the map above shows, Collinson circumnavigated the globe once as part of his journey to northern Canada. While doing so, his relatives in London used an interesting method to communicate with him. Once a month, they published a coded advertisement in the “Times”, probably the most important newspaper in the world at that time. 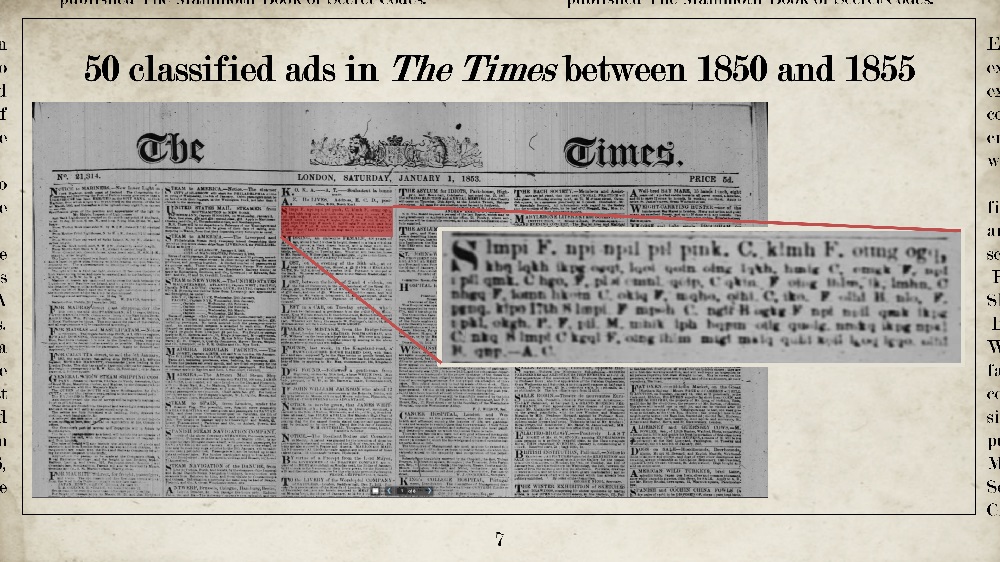 Since the Times was available in all the world’s major port cities at the time, Collinson was able to acquire the relevant editions and decipher the ads during his five-year journey. So he was always up to date on the latest family gossip.

On July 17, three of us gave our talk at the ICCH Forum and received very positive feedback. A few days later, the HOPE lecture took place in New York. However, there was a small catch for me: I did not want to or could not travel to the USA for a lecture. Therefore Elonka and A.J. held the presentation without me. I wasn’t too worried because both of them are very good speakers. 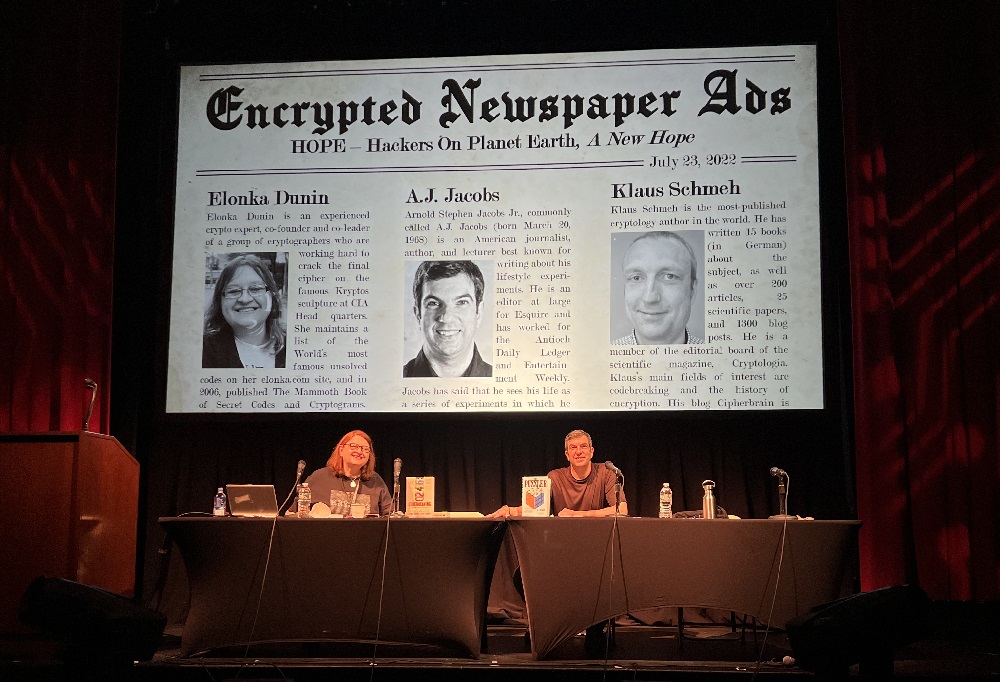 Information fell under the table

Especially the lecture chapter presented by Elonka about the Collinson expedition was apparently very well received. The press was also interested in the story. Thus, a detailed article about the lecture appeared in “The Vice” magazine with a focus on the Collinson ads (thanks to Ralf Bülow and Tony Patti for the reference). “The Vice” has a circulation of 1.2 million and a reach of 130 million readers, according to Wikipedia. There are also two Turkish versions of this article.

The web portals IFL Science, Android Authority and “My Droll” adopted parts of the Vice article. Elonka then gave a podcast interview about it. Of course, I’m pleased that the talk made such a wide impact, even if I couldn’t be there. At least I’m mentioned in the various publications and can now add the most important hacker conference in the world to my list of references. 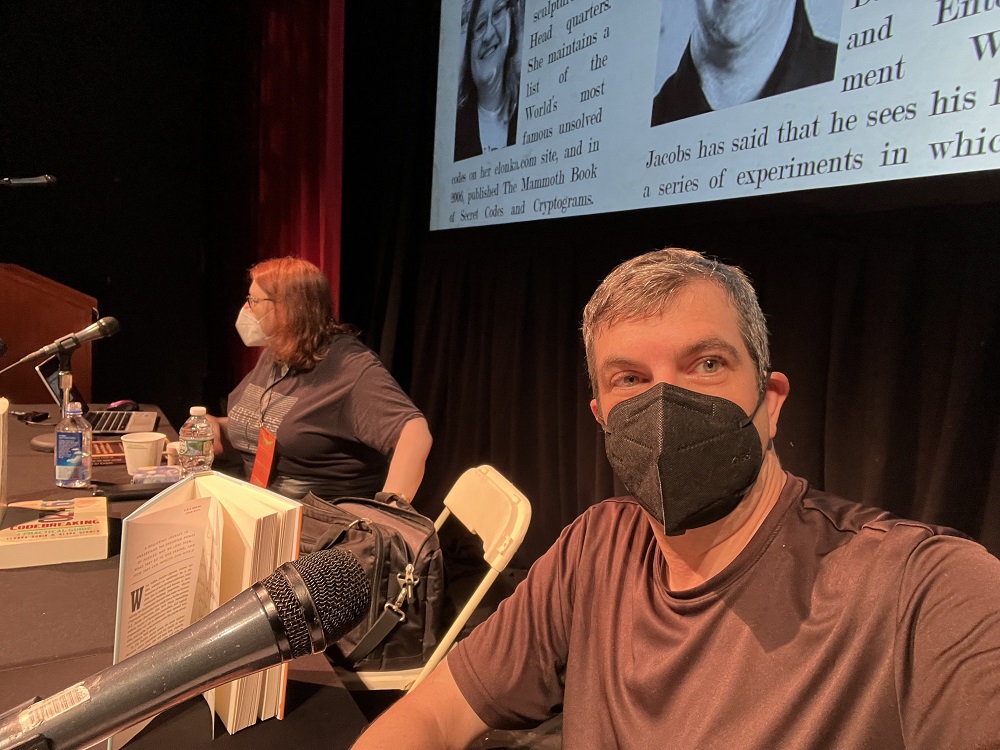 Unfortunately, one thing is misrepresented in the articles: The deciphering of the Collinson messages is not the merit of Elonka, A.J. and me. Instead, it was John Rabson who succeeded in deciphering them back in 1992. But apparently Elonka presented this story so convincingly that this information fell under the table.

A scrambled message from Germany

Originally I wanted to present an unresolved encrypted advertisement at this point, which was mentioned in the lecture. But then I received an e-mail from Jannis from Marburg yesterday. He pointed me to an encrypted newspaper ad he discovered 15 years ago in the “Bild”. I included this in the article at short notice. 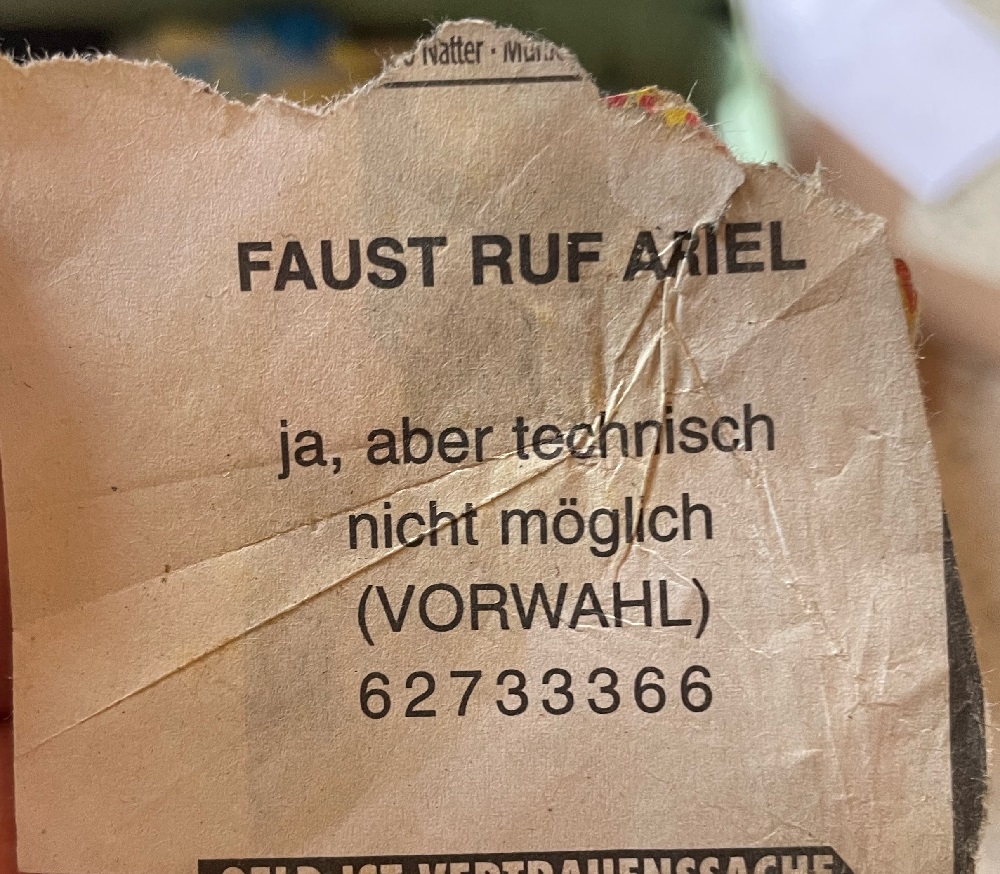 I am afraid that this display is difficult to decode. “FAUST RUF ARIEL” is likely to be a code expression known only to the recipient. The numbers below could stand for a phone number, with the area code assumed to be known.

Can any reader make sense of this cryptogram? Jannis and I would be pleased about corresponding comments.