StartseiteCipherbrainGolden Alice Awards 2020: And the winners are

Golden Alice Awards 2020: And the winners are

In 2020, I will again award the Golden Alice for outstanding achievements in crypto history and code breaking just before New Year’s Eve. Here are the winners!

The Golden Alice is traditionally awarded in eight categories. Fortunately, the Corona virus has hindered cryptography and code breaking far less than many other things. Congratulations to all the winners and have a Happy New Year 2021.

In 2020, there were again some impressive decryptions to report on my blog. Here is an incomplete selection:

Tomas Bosbach, Armin Krauß, Jerry McCarthy, Ralf Bülow and some other longtime readers were also very active on this blog again – many thanks for that!

However, the greatest codebreaking achievement of the year was without a doubt Dave Oranchak, Jarl Van Eycke and Sam Blake. 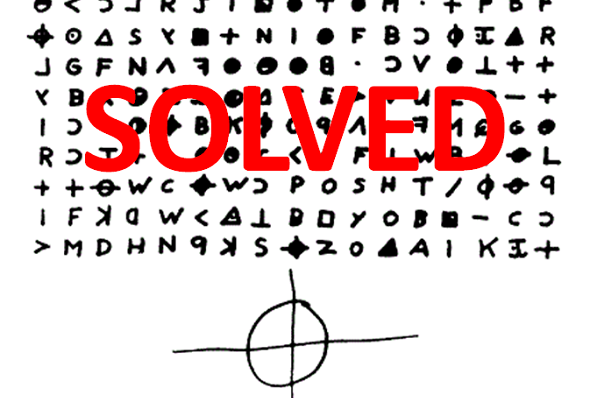 The three of them solved the second encrypted message of the Zodiac Killer (Z-340) after 51 years. On my list of the 50 most important unsolved ciphers, the Zodiac Killer was number 2, behind the Voynich Manuscript. Should the Golden Alice be awarded in 80 years for the best deciphering achievement of the 21st century, the solution of Z-340 could well be the winner.

Golden Alice 2020 for the best book

The most important crypto book of the year from my point of view was of course Codebreaking: A Practical Guide by Elonka Dunin and myself.

However, if I were to award this work a Golden Alice, this decision could be interpreted as biased.

The Golden Alice in this category therefore goes to John Dermot Turing and Christopher Andrew for their 2020 work Codebreakers of Bletchley Park. 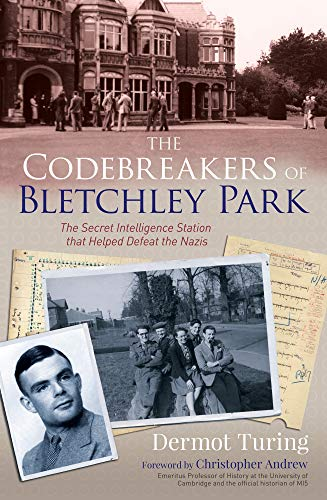 Unfortunately, television has still not really discovered cryptography as an exciting topic. At least the Rubikon affair has provided a few interesting TV reports on Crypto AG and its connection to the secret services this year. The Golden Alice in this category goes to the following documentary by Swiss Television:

Some TV appearances of mine, which were made some time ago, can be found here.

Golden Alice 2020 for the best event

Unfortunately, as far as I know, no face-to-face event on crypto history took place this year due to Covid-19. The HistoCrypt had to be cancelled. Instead, a great online platform has emerged in the form of the ICCH Forum, to which I would like to award the Golden Alice.

ICCH lectures (they are held in English) take place every two weeks on Saturdays. Unfortunately, there is no website for them, and the participation links are deliberately not published on the Internet. Nevertheless, everyone is welcome, and participation is free. If you want to attend, feel free to send me an email.

Golden Alice 2020 for the most interesting encrypted book

Encrypted books are one of my favorite topics. In 2020, my Encrypted Book List grew from 100 to 106 entries thanks to some new discoveries. Which new entry is the most interesting? From my point of view, it’s definitely the Europa Redux manuscript I blogged about in March. 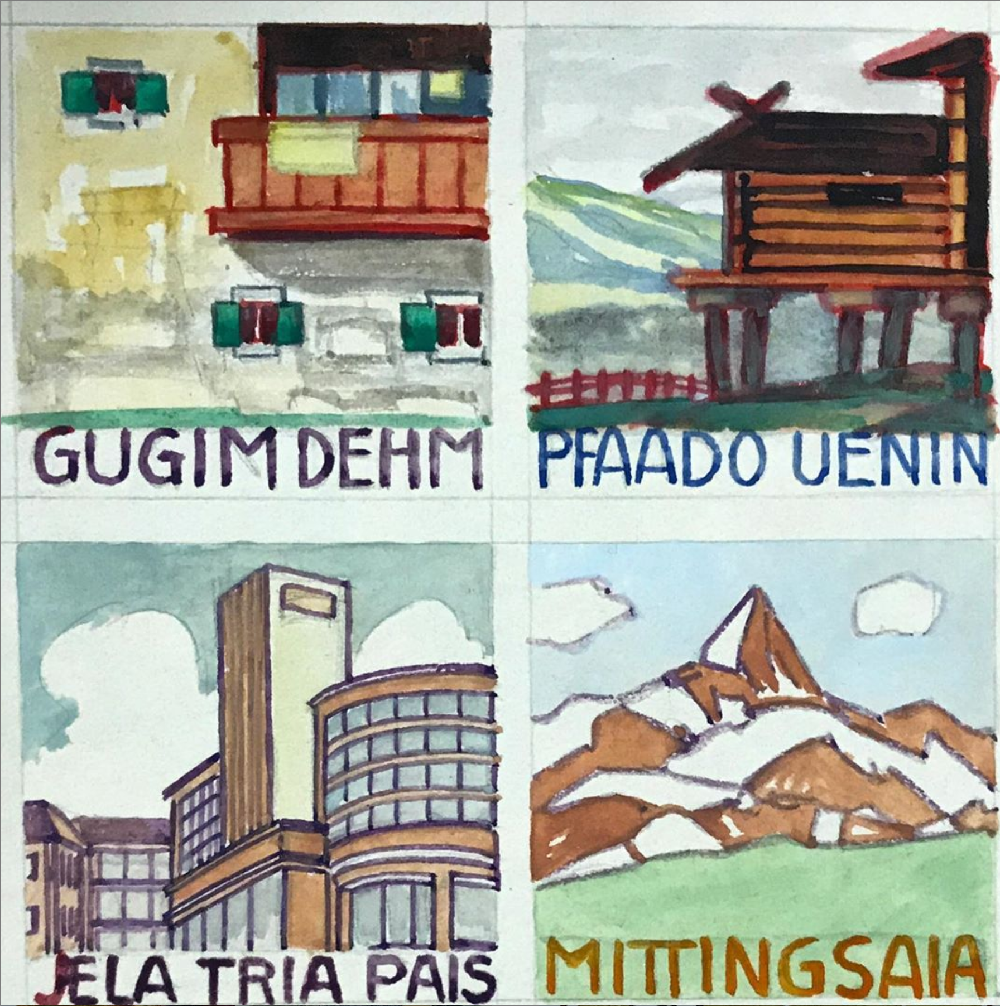 The Europa Redux manuscript, which was brought to my attention by Prof. Robert Goulding, was created from 1940 to 1946, probably in Switzerland. The author is not known. It is likely to have been a professional artist.

The numerous captions, for example JELA TRIA PAIS or MITTINGSAIA make no discernible sense. Possibly they are encoded. It is also conceivable that they are meaningless sequences of letters.

The Europa-Redux manuscript is still an unsolved mystery. I will gladly accept any relevant information.

Golden Alice 2020 for the most interesting encrypted postcard

In 2020, I once again published almost 20 articles about encrypted postcards, and my readers solved almost all of them. The most beautiful card of the year in my opinion (Günther Hunger from Oschatz provided it to me) shows a dog: 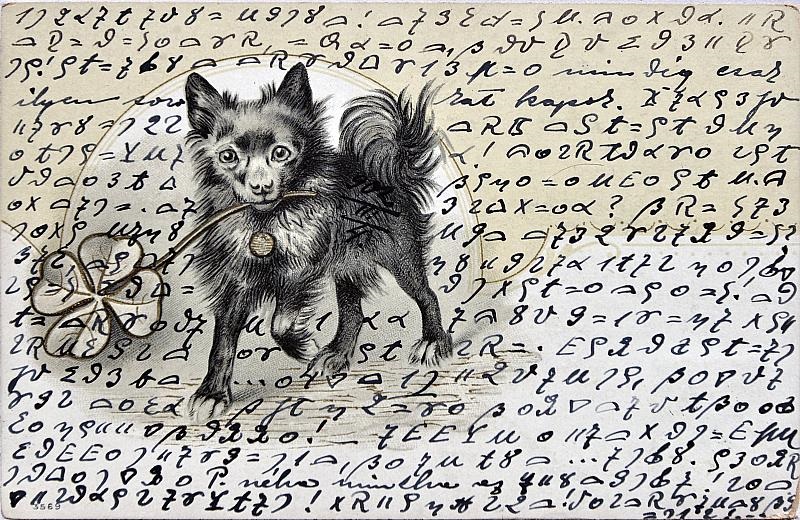 Blog reader Norbert Biermann solved this cryptogram from 1920, which was not easy because the plaintext language is Hungarian.

From year to year, I receive more and more tips about unsolved encryptions from my readers, which of course makes me very happy. Google and Reddit are also interesting sources in this regard. For a long time now, it would not be a problem to compile a list of the 100 most important unsolved cryptograms (until then, my top 50 list will have to suffice, in which many new discoveries are missing).

In 2020, I was again able to report on numerous new discoveries from this section. Some were solved by my readers, others would still fit into the said Top 100 list.

Since cryptograms with a connection to a crime (True Crime) are particularly popular with my readers, I would like to award the Golden Alice to a ciphertext (but certainly not to its author) that plays a role in a US murder case. I would also be happy to accept relevant leads on this topic. 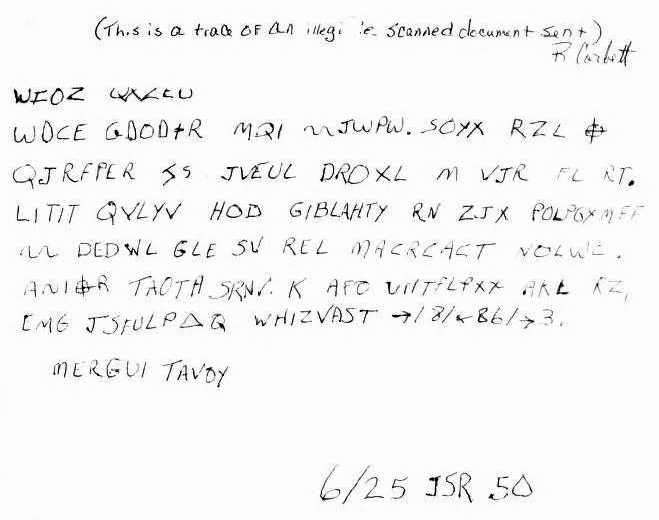 This year I would like to award the Golden Alice in this category to Tobias Schrödel and Nils Kopal for their Cryptobooks Page. It is the most comprehensive crypto bibliography in the world and currently lists 546 works. Without a doubt a great and very informative website.