A coded newspaper advertisement published in 1889 by a quack salver in Colorado remains unsolved. Thanks to my readers, today I can at least provide new information about the author of this cryptogram.

Anyone interested in encrypted newspaper ads should make a note of July 17, 2022. On that day, I will be giving an online talk on this topic at 6 p.m. in the ICCH Forum. My co-presenters will be Elonka Dunin and best-selling U.S. author A.J. Jacobs.

A few days later, this presentation will be given as a face-to-face talk at the HOPE hacker conference in New York. I will probably not be there myself, because a trip to New York just for a talk would be a bit too costly. But I am sure that Elonka and A.J. will manage without me.

Those who read Cipherbrain regularly know that I’ve blogged about encrypted newspaper ads from France several times in recent weeks, and that blog reader Didier Müller has even set up his own website about it. Of course, this will play a role in the talk. In addition, we will present a few other exciting stories on the topic, some of which have never been presented publicly before.

In the said talk, we will also present the only encrypted newspaper ad from the USA that I know of so far. Cipherbrain reader Thomas Bosbach alerted me in December that this was being discussed on Reddit. I blogged about it, but unfortunately none of my readers could solve the puzzle.

The address mentioned under the message refers to a US company called Gun Wa. This sold dubious remedies in the late 19th century, which allegedly came from China and were developed by a Chinese professor named Gun Wa. 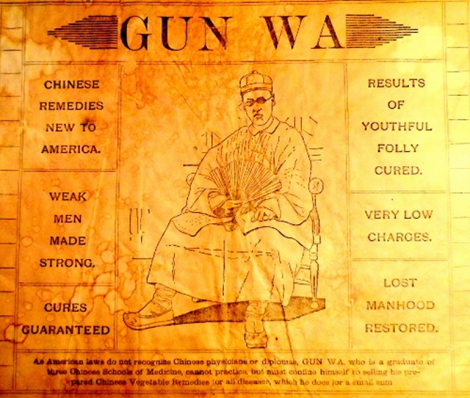 On a website that Thomas found, there are a few bottles pictured in which Gun Wa sold his remedies.

As you can read in this paper, for example, Gun Wa was nothing more than a cleverly contrived hoax. The Chinese professor in question did not exist, and the medicine was ineffective.

After all, the fraud was well organized: There were several people who set up Gun Wa companies in different regions of the U.S. and sold the miracle cures. For example, the following advertisement (it does not contain encryption) is from the “Indianapolis Journal” of January 14, 1890: 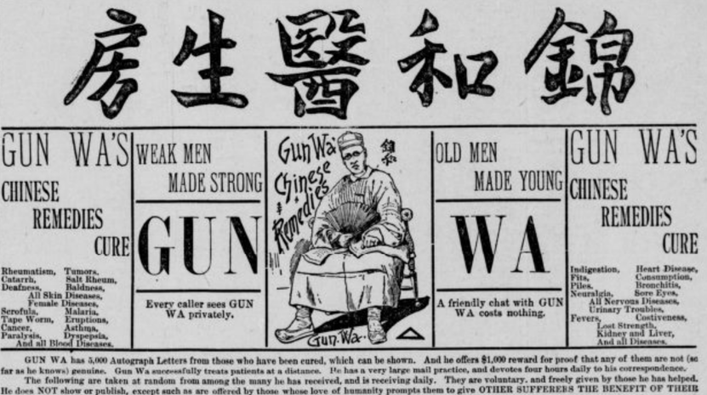 This scrambled ad from the Denver Times is from the Gun-Wa Company in Colorado, which existed from 1888 to 1894. The Gun Wa representative there was an Irish immigrant named William Hale. The latter sometimes passed himself off as the Chinese Professor Gun Wa, avoiding too close contact with his customers for reasons that can be understood.

Hale was arrested twice and fled to his homeland in between. After his second arrest, he was sentenced to 18 months in prison for mail fraud and distributing pornography (which always meant damas). According to my information, the timeline is as follows (I will gladly accept corrections):

So William Hale had some trouble with the law. However, his scrambled ad appeared well before his two arrests and therefore is not likely to be related to them .

Thanks at this point to readers Schorsch and The_Piper, who provided interesting information about Gun Wa in their comments.

On Reddit, Cipherbrain reader YefimShiffrin posted the following transcription of the cryptogram:

With CrypTool 2 or Multi-Dec from Cipherbrain reader Christian Baumann you can determine the following letter frequencies:

The coincidence index is 4.1 percent. Blog readers Norbert Biermann and ShadowWolf suspect that a polyalphabetic cipher of period five was used. An example would be a Vigenère cipher with a password consisting of five letters.

Can a reader find out more?