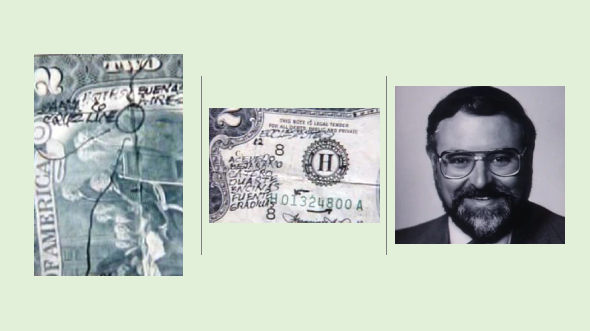 The Chuck Morgan case: a murder victim and his coded (?) notes

US businessman Charles “Chuck” Morgan was found dead in 1977. He was carrying incomprehensible notes that could have been a coded message.

Since I’ve been writing this blog, I’ve always been on the lookout for interesting stories related to encryption. I am particularly interested in encrypted information that has something to do with a criminal case. This topic (i.e. “true crime” combined with cryptology) goes down particularly well with my readers.

It is all the more astonishing that a case from the seventies, which fits into this category, has completely passed me by in all this time. It’s about the mysterious death of U.S. businessman Charles “Chuck” Morgan, with whose body an encrypted (?) record was found. This case is not mentioned in the crypto literature to my knowledge and I never came across it in my numerous Google searches.

Last Sunday, when I was giving a webinar talk that also brought up the Paul Rubin case, a listener named “porpen petfukfiri” thankfully brought the similar Chuck Morgan story to my attention. Today I want to present it for the first time on Cipherbrain.

Chuck Morgan was a quite successful businessman who lived with his family in Tucson (US state of Arizona). He ran a trust company. 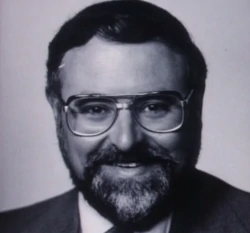 On March 22, 1977, Morgan had suddenly disappeared but reappeared three days later. He claimed to have been kidnapped, abused, and drugged. However, he refused to involve the police. According to his wife, he subsequently appeared tense and frightened.

In May 1977, Morgan disappeared again. 11 days later, his body was found outside Tucson in the desert. He had been shot to death. Police classified the death as a suicide. If one believes the reports on this subject that can be found on the Internet, then this was a more than questionable assessment. It seems much more likely to the reporters that Morgan was murdered.

My description is merely a short version. If you want to know more about this story, you can find a detailed article on the website of the TV program “Unsolved Mysteries”.

For the Cipherbrain blog, the Chuck Morgan case is interesting because several unintelligible (possibly encrypted) notes play a role.

First, Morgan’s wife received an anonymous phone call from a lady two days before the body was found. These said only one sentence:

“Ecclesiastics” is a book of the Old Testament, which in German is called “Kohelet” or “Ecclesiastes”. In chapter 12: 1-8 of this book one reads the following:

Koh 12:1: Remember your Maker in your early years, / before the days of sickness come and the years reach you, / of which you will say: I do not like them!

Koh 12,2: before the sun and the light and the moon and the stars go out, / and even after the rain clouds come up again:

Koh 12:3: in the day when the watchmen of the house tremble, / the strong men stoop, / the millers cease their work because they are too few, / it becomes dark with the women who look out of the windows,

Coh 12:4: and the gate to the street is shut; / when the sound of the mill is hushed, / one rises at the chirping of the birds, / but the notes of the song fade away;

Koh 12:5: even the hill is feared, and the terrors by the way; / the almond tree blossoms, / the locust drags along, / the fruit of the caper bursts, / yet a man goes to his eternal home, / and the lamenting ones go through the streets-.

Koh 12:6: yes, before the silver cord breaks, / the golden bowl breaks, / the pitcher is shattered at the spring, / the wheel falls broken into the pit,

So it’s about transience and bad times ahead. Since Morgan had died shortly before and the discovery of the body could be expected in the near future, this was quite fitting. But what was the purpose of the call?

When Morgan’s body was examined, a two-dollar bill was found attached to his underwear. On it were found several notes: 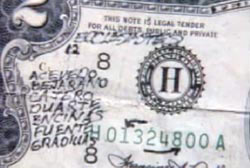 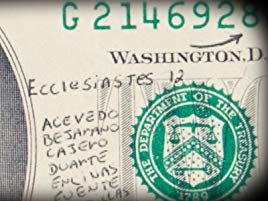 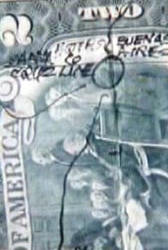 Is there cryptology behind it?

True to the motto “he who has a hammer regards every problem as a nail”, I naturally first wonder whether these notes have a cryptological background. At least, this cannot be ruled out. So it could be one or more encrypted messages.

Clearly more probable seems to me, however, what we have to do with a cryptographic key. For example, the Bible passage in question could have been used as a key for a running key procedure.

The six Spanish names could be used, similar to what the RAF did, as a key for a homophonic procedure (i.e. as a book cipher, whereas the “book” here consists of only six words). However, only 17 different letters occur in these names, which would complicate matters somewhat.

The numbering of the signers of the Declaration of Independence could have a similar purpose and serve as a key.

Can any reader say more about this?