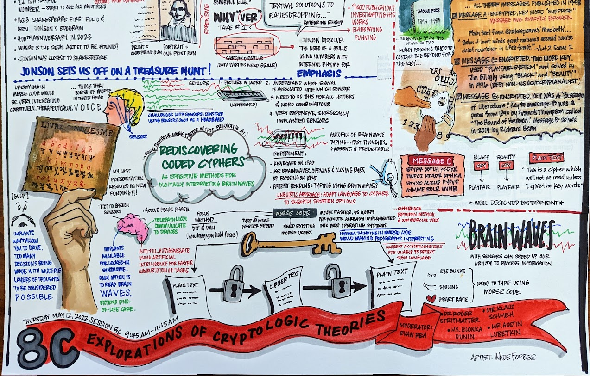 The Thouless experiment as sketchnote

Draftsman Wade Forbes recorded a talk by Elonka Dunin and me in the form of sketchnotes. Here is the result.

“Do you know what a sketchnote is?” a colleague asked me a few years ago. I didn’t know, so the colleague explained to me: sketchnotes are notes created by hand that consist of text, symbols and images. The main purpose of sketchnotes is to protocoll a talk or lecture.

In May of this year, the NSA Cryptologic History Symposium took place, this time held as an online event due to Corona. It was learned in advance that some of the lectures would be accompanied by a professional sketchnoter. The talk “Robert Thouless’s Paranormal Crypto Experiments “, which I gave with Elonka Dunin, was one of them. My other presentation, entitled “The Codes and Ciphers of the Red Army Faction,” which I presented alone, was unfortunately not sketchnoted.

On May 11, Elonka and I gave the Thouless lecture. As a reminder, in 1948, Robert Thouless (1894-1984), a Briton, launched an interesting experiment. He encrypted a message in a form that he believed could not be cracked, and announced that after his death – if possible – he would transmit the key from the afterlife. If someone were to receive this key and were thus able to decode the text, it would be proven that there is life after death and that the dead can communicate with the living. One of the greatest sensations in the history of science would be perfect.

To be on the safe side, Thouless published two messages at once (today they are called A and B), which he encrypted with two different keys – you never know what might get lost on the journey to the afterlife. When message A was promptly solved by a crypto expert, he created a third (message C). So when Thouless died in 1984, he actually left behind two unsolved cryptograms and took the associated keys to his grave.

In the meantime, however, code breakers have deciphered messages B and C by this-worldly means. Incidentally, the two successful Thouless solvers are readers of this blog: Jim Gillogly and Richard Bean.

Robert Thouless found several imitators who performed similar experiments. Among them was the Briton T. E. Wood, who died in 1972, taking the key to a coded message to his grave. So far, neither parapsychologists nor crypto experts have been able to do anything.

Another experiment of this kind was done by me. Unlike Thouless and Wood, I used modern cryptography to encrypt an appropriate message. I hope that it will be a while before I have the opportunity to report from beyond the grave.

Even before Thouless, the famous magician and skeptic Harry Houdini had performed a similar experiment. However, he did not use encryption, only a password.

The sketchnotes of Wade Forbes

The sketch artist who converted Ekonka’s and my talk into sketchnotes was Wade Forbes. Wade was also a speaker at the same conference, and at this he presented a project called “CryptoComics” with NSA historian David Hatch, about which I unfortunately couldn’t find anything online. Maybe a reader knows more.

The sketchnote image Wade made referred not only to the Thouless talk, but also to two other presentations that took place in the same session: “Witty Numbers” by Roger Stritmatter and “Rediscovering Coded Cyphers as Effective Methods for Digitally Interpreting
Brainwaves” by Austin Lubetkin. Here is the result: 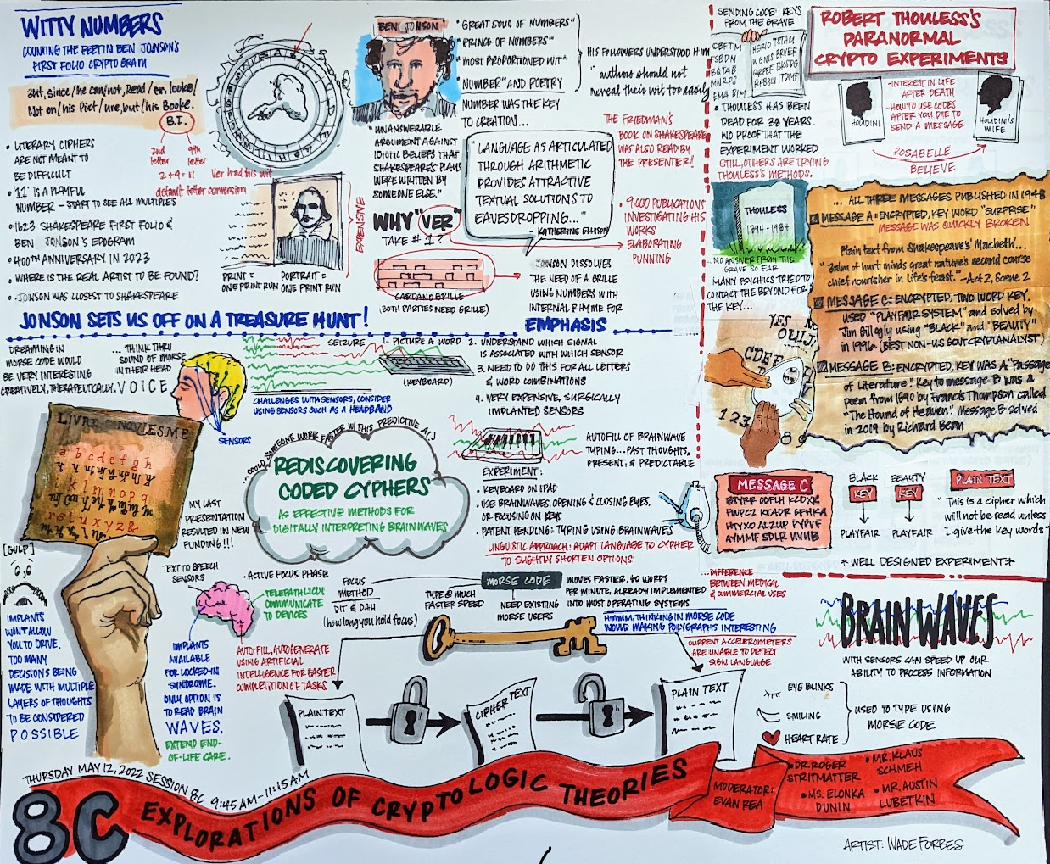 The Thouless lecture is framed in red and can be seen in the upper right. “Whitty Numbers” is logged in the upper left, “Rediscovering Coded Cyphers” in the lower. Here is the Thouless portion in enlargement: 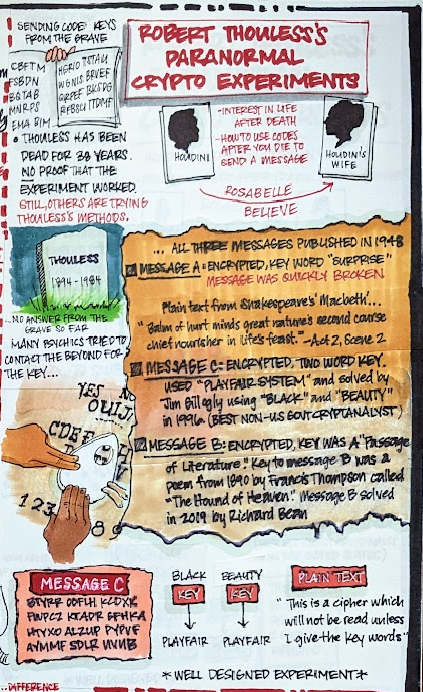 I find it exciting to see a presentation of mine documented in the form of sketchnotes. Let’s see if there will be such a service at future conferences.