StartseiteCipherbrainUnsolved: An encrypted Postcard from an early soccer official 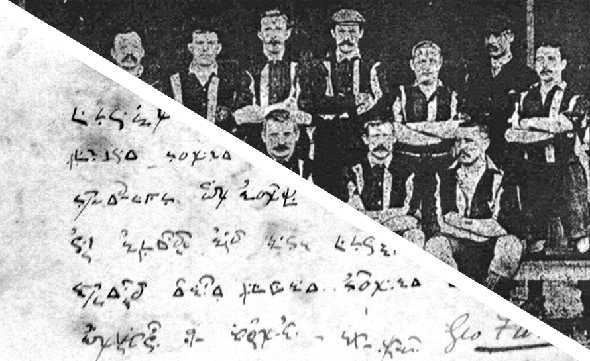 Unsolved: An encrypted Postcard from an early soccer official

In 1873, an English football official sent a coded postcard to his sister. His great-great-grandson contacted me about it. He would love to know the solution to this old family mystery.

Encrypted postcards are one of my favourite topics on Cipherbrain. I have now presented well over 100 of them, and my readers have solved almost all of them.

One of the few exceptions is one of the most historically interesting cards I have blogged about so far. It comes from an English football official from the 19th century. A descendant of this man recently contacted me. He would understandably be delighted if this old family mystery was finally solved. Perhaps my readers can contribute.

Addendum to the Mars Landing

Before I return to today’s topic, I would like to mention that there is some news about my Cipherbrain article on the code in the Mars parachute. Elonka Dunin has alerted me to the fact that NASA has created yet another object with a secret message for this mission, and that is a cryptogram modelled on Sherlock Holmes’ dancing men. Cipherbrain reader Gerry Haynaly solved this challenge. Dave Oranchak has also created a video that explains the parachute code very well:

All this can be read in comments 2-5 on the said Mars Code article.

The postcard mentioned at the beginning was brought to my attention by Thomas Bosbach a few years ago. Thomas also identified some interesting information about the background of this cryptogram, which eventually led to two blog articles in 2017 and 2019.

The author of the card was a certain George Furlong (1843-1911), who worked as an official for the English football club Luton Town FC. The town of Luton is located north of London and is today best known as the location of one of London’s six airports. 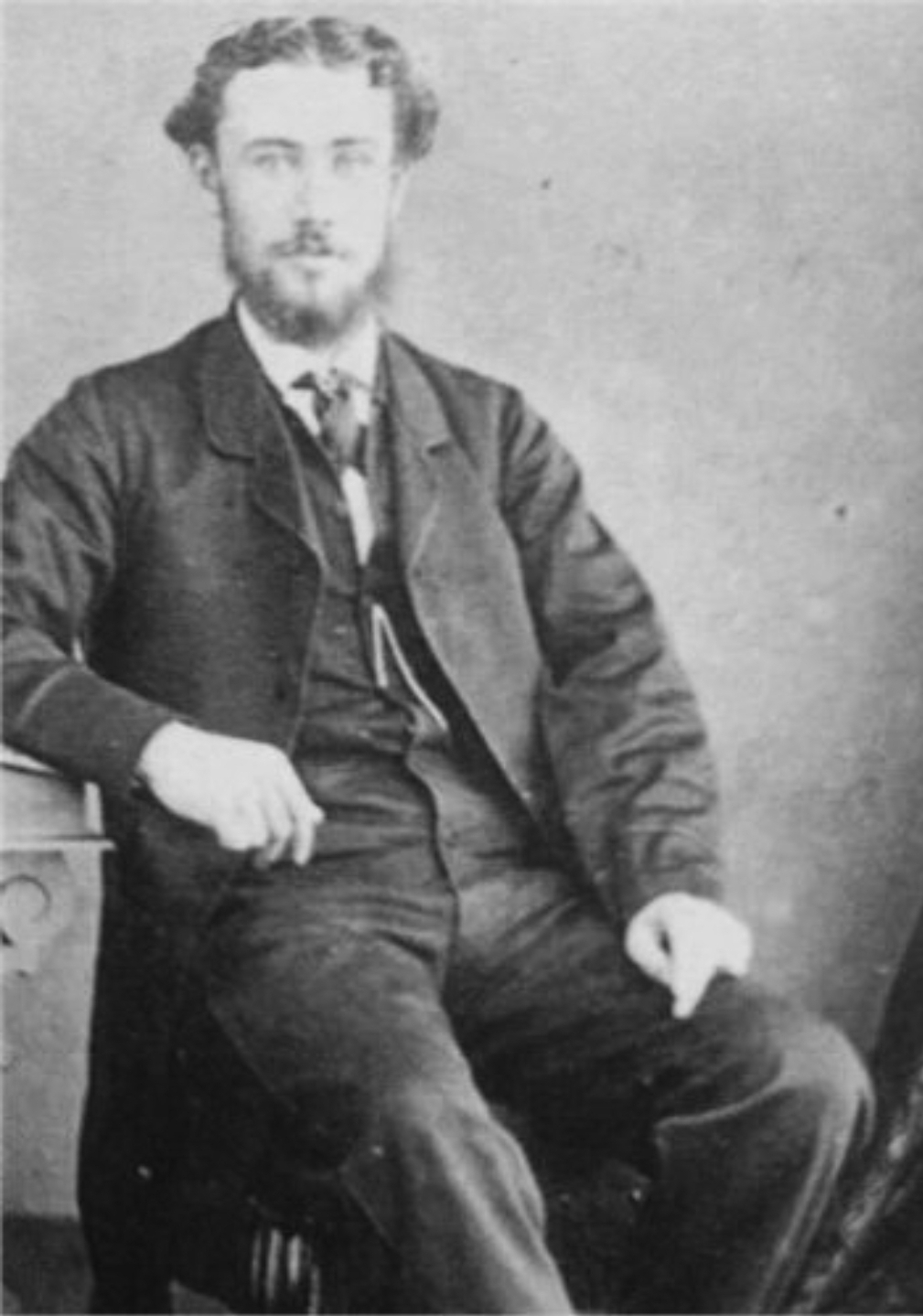 According to my information, George Furlong himself did not appear as a player at the club, but his son John B. Furlong did. He was a teacher and schoolmaster by profession. He had seven children with his wife Mary.

George Furlong left behind a postcard he had written to his sister Lizzie on 1873. Three years ago, his great-great-grandson Andrew Furlong posted it on Reddit. He wrote:

Written in 1873 by my great, great grandfather George Furlong (from Luton, Bedfordshire) to his sister Lizzie who was living in Cosheston, Wales. The postcard seems to use some variation on the masonic pigpen code. If you can help decipher this, please let me know.

I’m hoping some brilliant mind somewhere is trying to work this out. It’s driving me crazy.

Here is a scan of the map that Andrew Furlong says is driving him crazy: 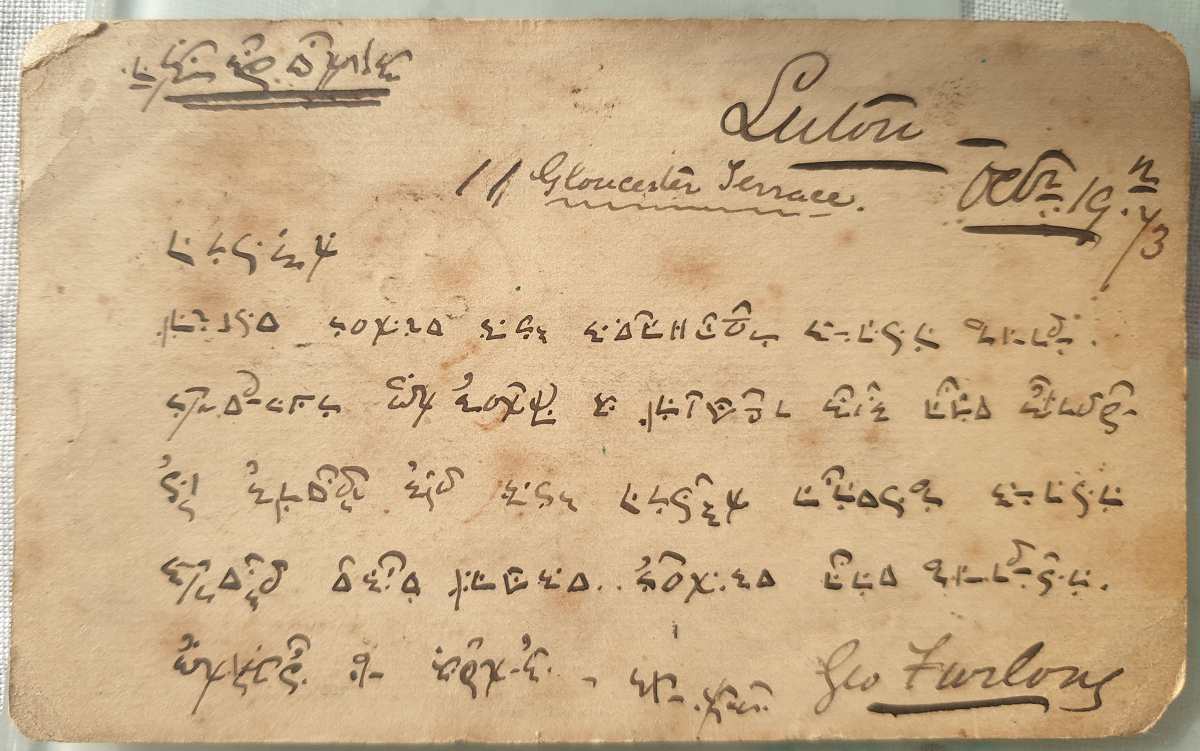 To my knowledge, the front of the card has not yet been published. Here it is: 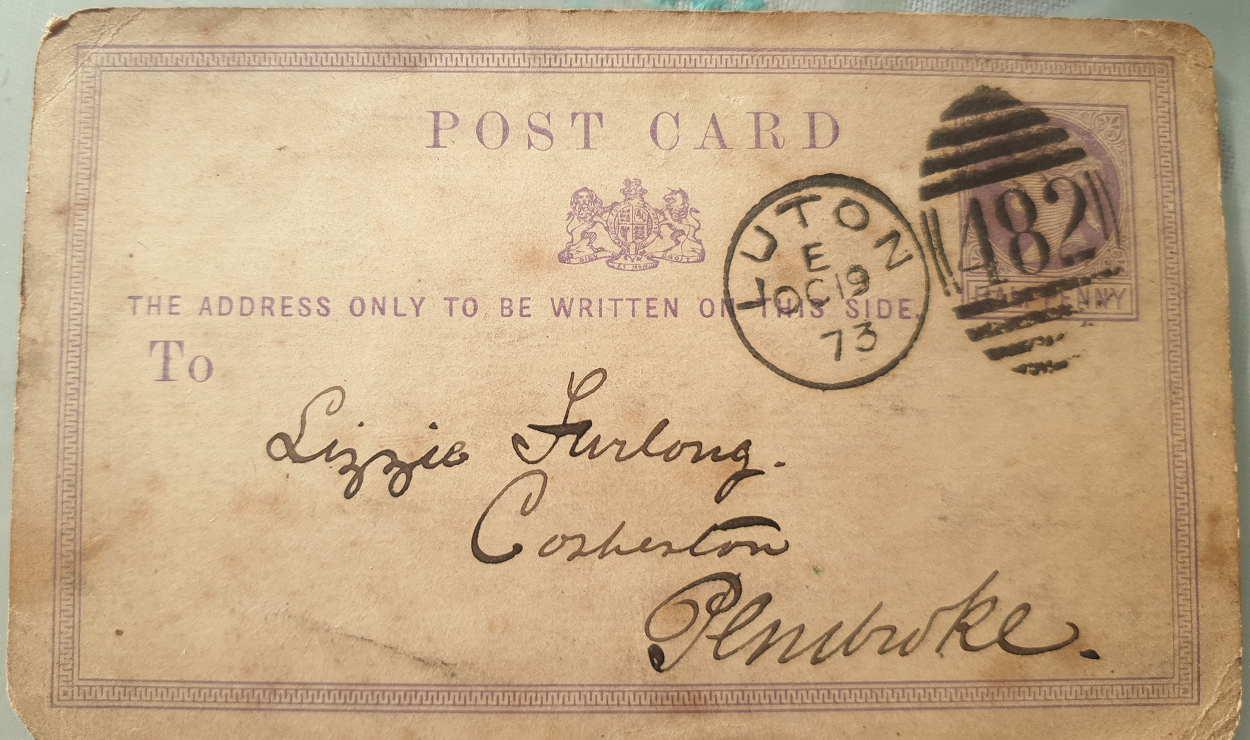 A few days ago, the said Andrew Furlong, the great-great-grandson of the football official, contacted me. He provided me with the above photo of his ancestor and the front of the card. Andrew Furlong lives in Ontario, Canada. To his knowledge, the coded postcard remains unsolved.

I have to admit that I can’t make sense of the script in which the card text is written. Almost all the encoded postcards I know have been made with a simple letter substitution. Of course, that could also be the case here, but it is very unusual that some of the symbols are on top of each other. A frequency analysis is difficult to make here.

The typeface appears unusually fluid for a cipher. Furlong must have been practised in this script. A shorthand script would be possible, but such a script normally looks different. The very fact that the symbols are not connected would be unusual, as this slows down writing. Moreover, symbols such as the triangle or the double semi-circle with a dot in the middle are too complex for shorthand.

Richard SantaColoma came up with the following approaches in a first analysis:

I think the “delta” shape may be a “D”. I’ve seen this more than once in ciphers, and it would fit in several instances. See the second from the last words in the second and fourth full sentences. If these were “AND”? As for the person addressed (If that is what it is, a name), it could then be “ASTER”. This was a 19th century British female name. Perhaps the second word in the second from the bottom sentence is then “DID”.

Blog reader Charlotte Auer wrote the following comment: “At first glance, this reminds me strongly of Tironian notes. If Furlong was a college teacher, it is quite possible that he was familiar with them. Also possible, I think, is that Tironian notes were the source of inspiration from which he and his sister derived their very private cipher.”

Tironian notes are a shorthand script developed in the first century B.C. for taking notes in speeches and court proceedings, comprising around 4,000 characters. Here is an example of it: 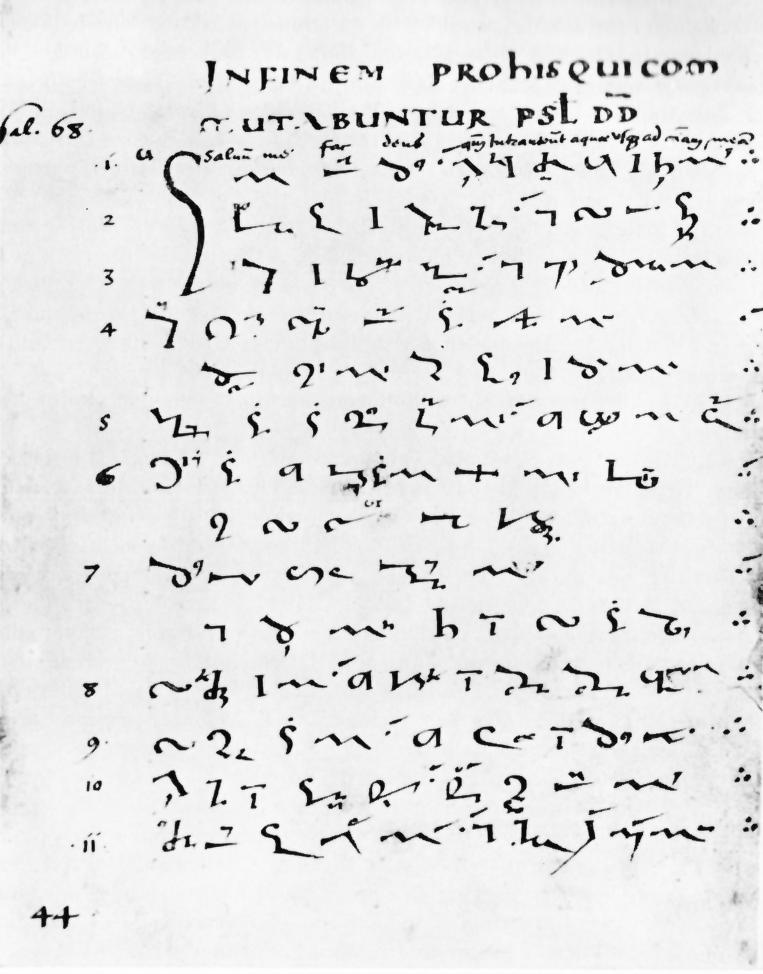 So there are a few interesting approaches to solving this puzzling postcard. Any readers getting anywhere with it? Andrew Furlong and I would be very pleased.