StartseiteCipherbrainWho knows anything about the virgin covenant? 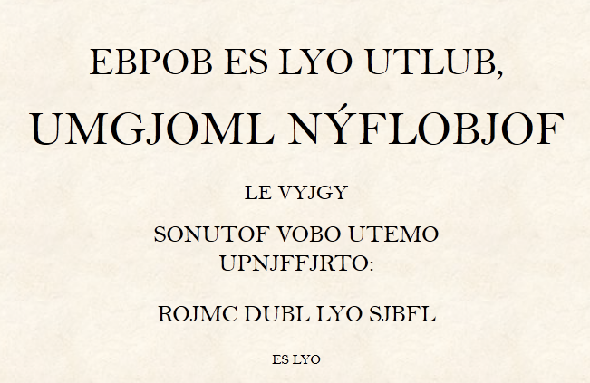 Who knows anything about the virgin covenant?

In the 19th century, a women’s secret society in London published two encrypted books. These cryptograms have long since been deciphered, but almost nothing is known about the secret society.

Anyone interested in the history of cryptography will inevitably come across secret societies like the Freemasons at some point. Such organizations were often founded to pursue certain ideas without the public being aware of them. At a time when criticism of the authorities could have serious consequences, secret societies were often the only way to discuss new social ideas.

The ciphers of the secret societies

Almost inevitably, encryption played a role in many secret societies. In particular, numerous encrypted documents are known from the Freemasons, some of which I have already mentioned on Cipherbrain. The “Triangle Book” is a nice example. 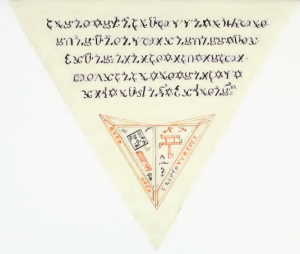 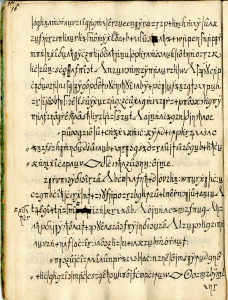 A particularly interesting secret society was the Association of Maiden Unity and Attachment, which must have been active in London around 1835. Its members were apparently women.

The “Association of Maiden Unity and Attachment” had two coded books printed. One copy of each is now in the British Library in London. I do not know of any other copies.

I looked at both books on site in London a few years ago. Unfortunately, one is not allowed to take photographs in the British Library. You can have scans made of the respective documents, but that was too expensive and too inconvenient for me. So I was content with typing a few pages of the two books on my laptop. The following pictures were taken this way. They are not originals, but they look similar.

The first book of the League of Virgins is entitled UMGJOML NÝFLOBJOF. According to the title page, it was published in London in 1835. I have included it in my Encrypted Book List under the number 00006. The following image shows the title page on the left, and a page on the right: 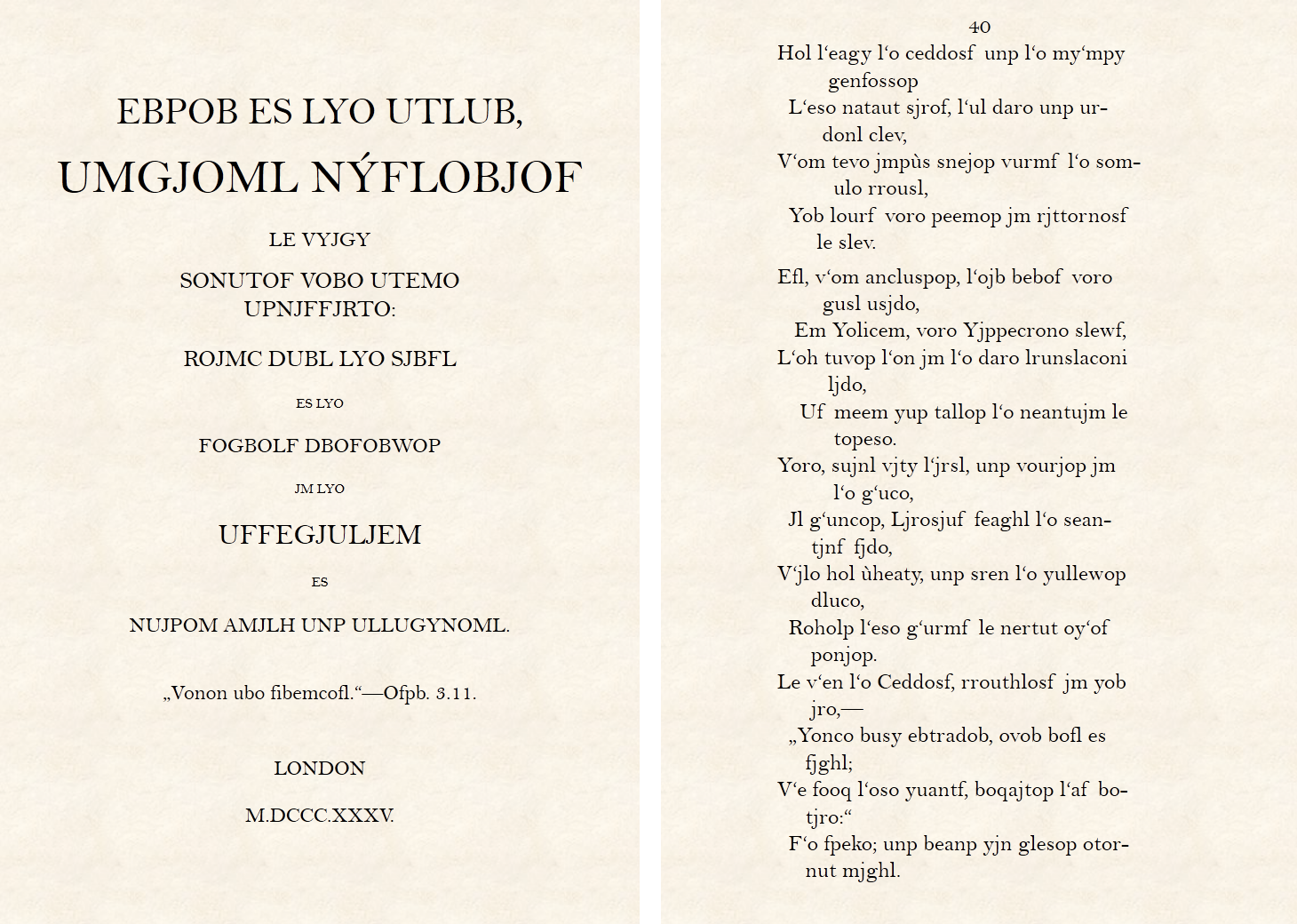 UMGJOML NÝFLOBJOF looks like a novel written in a foreign language. In reality, it is encoded English. Tony Gaffney solved the encryption. It turned out to be a simple letter substitution that Tony was able to crack with guessed words and frequency analysis. Some of the substitution table was used quite sloppily (intentionally?).

The title of the book is decoded ANCIENT MYSTERIES: 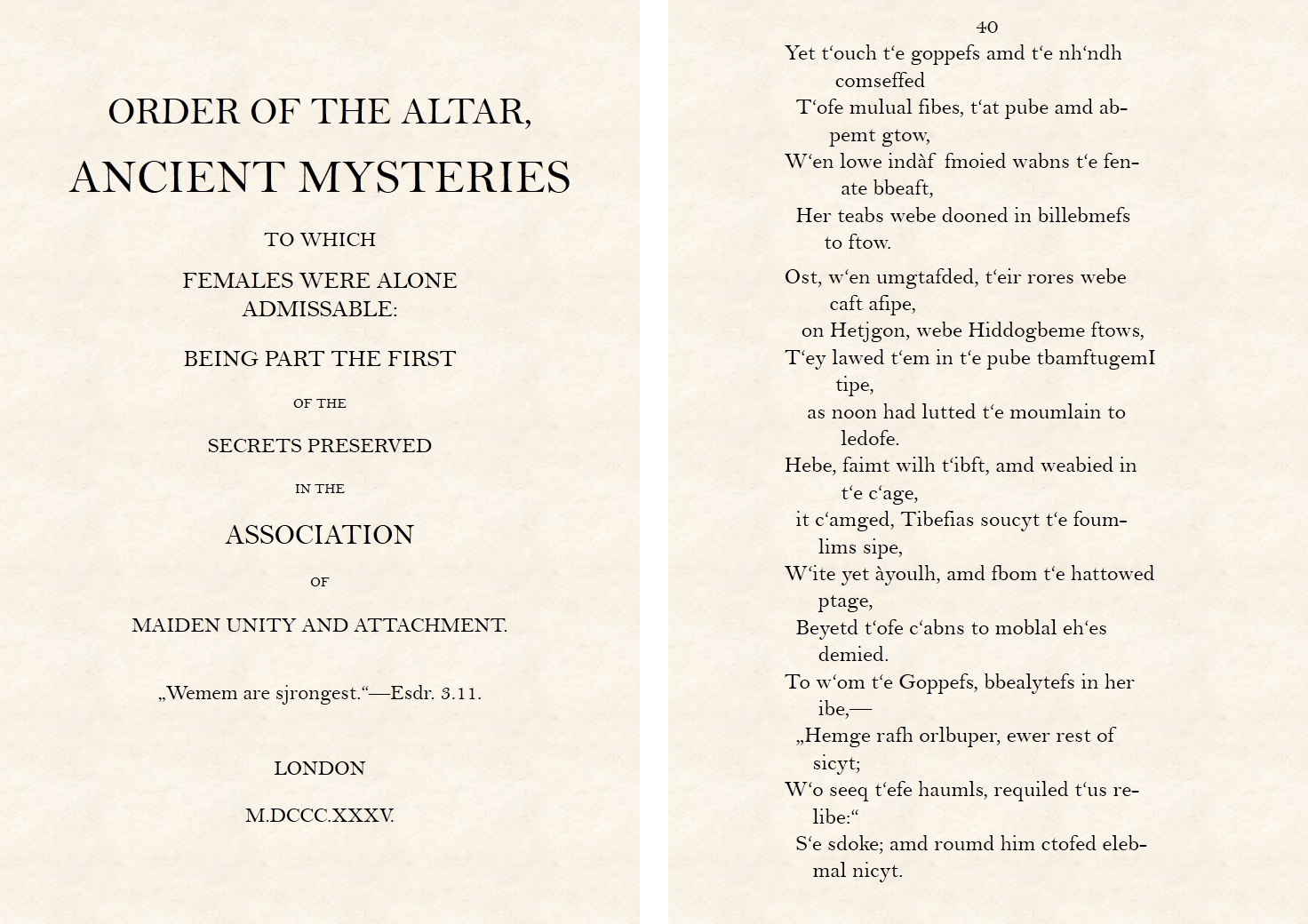 Here is the replacement table:

A poem is printed on the page of the book shown above. Otherwise, in this work you can read all kinds of rules of the Association of Maiden Unity and Attachment. Only maidens were allowed as members, and they could not be of low birth or have the status of a servant.

The fact that the book looks like a foreign language novel is probably intentional and should serve as camouflage.

The letter substitution is the same as ANCIENT MYSTERIES, which allows you to decipher the title into MYSTERIES OF VESTA. Unfortunately, this book contains no clues as to the place or year of publication. I suspect it is a sequel to the book described above.

Who was behind it?

To my regret, I have been unable to find out much about the Association of Maiden Unity and Attachment. Probably this society did not exist for too long and did not leave any major traces. However, it must have been able to have two books printed, which not everyone could afford at the time.

Does any reader know more about this secret society or about its books? Are there any other copies? With a printed book, that would be expected. Were there similar societies already active in the first half of the 20th century?

I will gladly accept any relevant information.

Further reading: Can you solve these encrypted notes from a travel book?