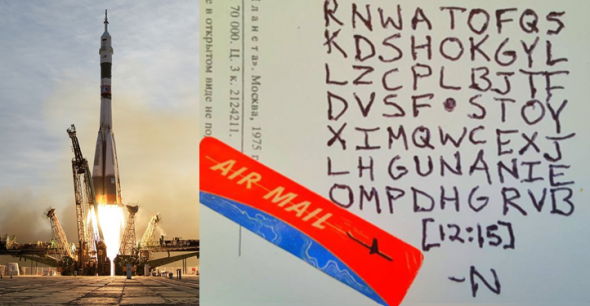 50 postcards written by two aerospace technicians in 1968 contain encrypted and hidden messages. If you want to solve them you should listen to “The Soyuz Files” podcast.

“Jacob and Nikolai have been pen pals for years. Despite working in competing space programs and living half a world away from each other, they find kinship in correspondence. But when pressure comes down from high ranking Soviet officials, mistakes and miscalculations become commonplace, and people begin disappearing mysteriously. Nikolai suspects something sinister. It is your job to uncover the truth . . . a truth hidden in the very messages you possess.”

This is the introduction of the interactive podcast The Soyuz Files. Of course, the story of Jacob and Nikolai isn’t real. It was invented by the creators of the podcast, Spencer Devlin Howard and Nathan Turner of the Los Angeles-based multimedia storytelling collective The West. However, Howard and Turner did their best in order to make this game look authentic. It features real postcards, radio broadcasts, and a number of hidden or encrypted messages.

The Soyuz Files website lists 50 postcards written by Jacob and Nikolai, all of them dated 1968.

Most of the postcards are in the clear. Some of these probably contain steganographic messages. Two cards are encrypted. In addition, there’s one card showing a simple encryption method (a letter substitution), but it is not clear what it was used for. Here’s one of the encrypted postcards: 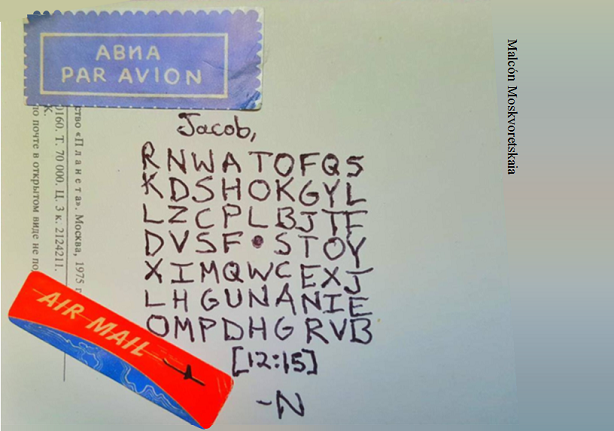 Can a reader solve it? I don’t know if it is even possible without having additional clues given elsewhere in the game.

I haven’t taken part in The Soyuz Files game so far, but it’s sounds very interesting to me. Especially, I like the concept. An interactive podcast can be thought of as an online version of an escape room. It is similar as or a type of an alternate reality game. If an interactive podcast features cryptographic challenges, like this one, it is also related to a crypo puzzle page, like Mystery Twister C3.

If a reader is taking part in the Soyuz Files (maybe this blog post will encourage some to join), I would be interested in learning about his or her experiences.
Follow @KlausSchmeh