On Reddit an encrypted postcard from 1909 was published. Can you decipher it?

Once again, an encrypted postcard is waiting to be solved. This time it was brought to my attention by David Allen Wilson in the Facebook group Codes & Historical Ciphers. Here it is: 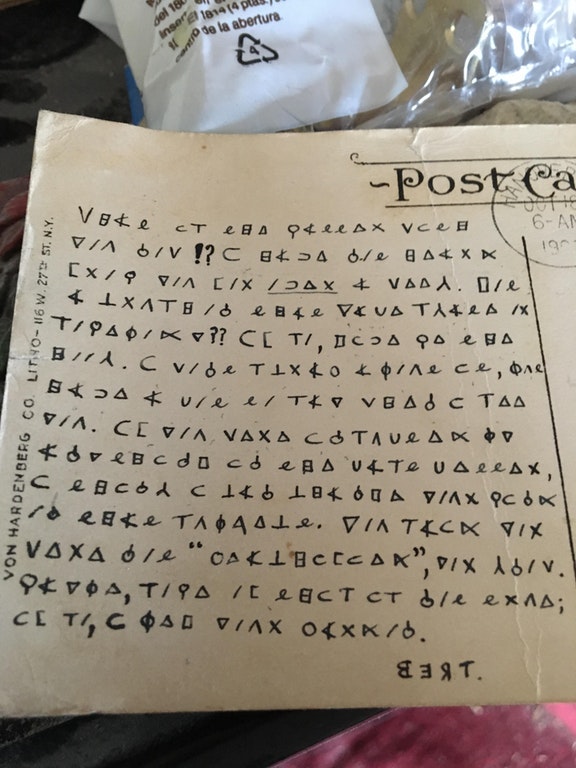 This postcard is discussed on Reddit. The picture side of the postcard and the address part are not shown. The stamp indicates a town named “Hanover”. According to Wikipedia, there almost 20 Hanovers in the USA (the name stems from the German city Hannover).

So far no solution of the encrypted message is mentioned in the Reddit comments.

The person who has published the card on Reddit writes: “Found it in my aunt’s parents house. It’s dated 1909. My aunt thinks it was her great aunt’s and maybe auntie was having an affair.” As frequent readers of this blog know, most encrypted postcards were written by young men to their spouses. The signature (which is not encrypted) indicates that the sender’s name was “Bert”.

The encryption method used is probably a letter substitution (also known as monoalphabetic substitution cipher or MASC). As the spaces between the words are visible, it should be possible to break the code by guessing words. For example, there is a word consisting only of the letter C in the sixth line. This word is probably “a” or “I”. As an alternative, a letter frequency analysis might lead to the cleartext.

Can a reader decipher this encrypted postcard?
Follow @KlausSchmeh