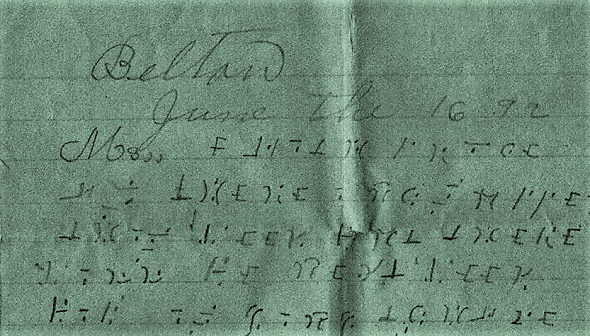 A member of a genealogy forum has posted an encrypted text that was left behind by an ancestor of his. Can a reader solve this mystery?

Dave Oranchak, whom many readers of Klausis Krypto Kolumne know as a Zodiac killer expert, has brought an interesting cryptogram to my attention. It was posted in the Facebook genealogy group “Lemko Ancestry & DNA”.

Here’s the cryptogram in question:

The Facebook poster writes: “I received this copy from my cousin. His father was born in Galicia/Poland and was Ruthenian. This came to his father’s house. […] He said it came from Ukraine. My dad was military with a security clearance but he died in 1981. The note was written in 1992. My cousin’s been going through things put away after his dad died.”

Though this cryptogram seems to stem from eastern Europe, it starts with English cleartext:

This means that the cryptogram is dated June 16, 1992, which is younger than most manually encrypted messages I have introduced on this blog. The first word in the third line could be “Miss”. On the second half of the note the words “Good bye” can be read.

To me this document looks like an encrypted letter. My guess is that it is a love letter sent from a young man to his spouse. A military or spy message is unlikely, as professional encryption methods available in 1992 did not require the use of a non-standard alphabet.

The encryption algorithm used could be a MASC (monoalphabetical substitution cipher). If so, it should be possible to break this encryption with a frequency analysis or guessed words.

Does a reader know what “Beltan” means? Nothing shows up when I type in this word on Google.

If a reader can decipher the Beltran cryptogram, please let me know.
Follow @KlausSchmeh