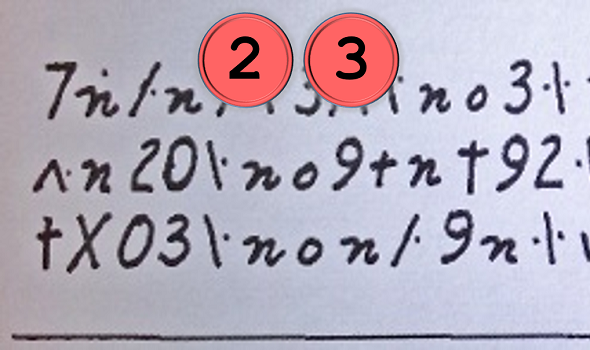 For decades, members of the American Cryptogram Association have tried to decipher an encrypted note found in Denmark – but to no avail.

Sometime after the Second World War – probably at the end of the 1950s – an employee of a military museum in Copenhagen came across an encrypted message. It was noted on a piece of paper that had been hidden on the back of a painting from 1835, showing a Danish general. Here’s the message:

The staff of the military museum could not decipher this cryptogram. So, they sent it to the American Cryptogram Association (ACA), the world’s most important organisation of hobby cryptologists (I’m a member of it, by the way). However, ACA members who tried to break the cipher were not successful, either.

In 2015 blog reader Kent Ramliden from Florida, a long-standing member of the ACA, thankfully provided me a scan of the note. I named it the “Copenhagen cryptogram”.

I wrote my first blog post about the Copenhagen cryptogram in 2015 (in German). I received a few comments, but nothing that led to new insights.

As far as I know, the Copenhagen cryptogram has never been covered in The Cryptogram, the newsletter of the ACA. Probably, not very many ACA members have occupied themselves with this mystery.

to my regret, I don’t have any additional information about the Copenhagen cryptogram. I neither know the name of the museum where it was found nor the year of the finding. The cryptogram probably doesn’t have a relationship to the painting where it was hidden or the depicted general. The name of the general isn’t known to me, either. The cryptogram is probably much younger than the painting. Maybe a reader can estimate the time when these lines were written. The writing looks quite modern to me.

Can a reader find out more about this strange note?
Follow @KlausSchmeh