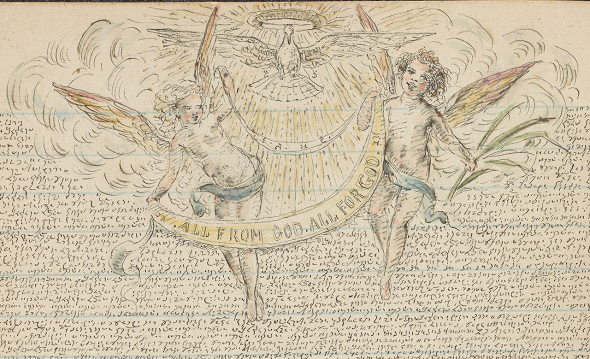 Ernest Rinzi was a 19th century jeweler, goldsmith and miniaturist. He left behind an encrypted journal that is still unsolved. My first impression is that this journal is the most notable unsolved encrypted book after the Voynich Manuscript and the Rohonc Codex.

Every year on New Year’s Eve I award the Golden Alice for the most outstanding crypto history successes of the year. One of the categories is “Newly Discovered Cryptogram”. Blog reader David Scheers from the Netherlands has now told me about an extremely interesting and beautiful cryptogram I have never heard of before – the encrypted journal of Ernest Rinzi. This journal is a good candidate for this year’s Golden Alice in the “Newly Discovered Cryptogram” category.

The Rare Book & Manuscript Library at the University of Illinois at Urbana-Champaign owns a journal Rinzi left behind. It is shown on the library’s Tumblr site (check here, here and  here). Apparently, this manuscript is encrypted. 23 scans are available online. The website doesn’t say how many there are in total. 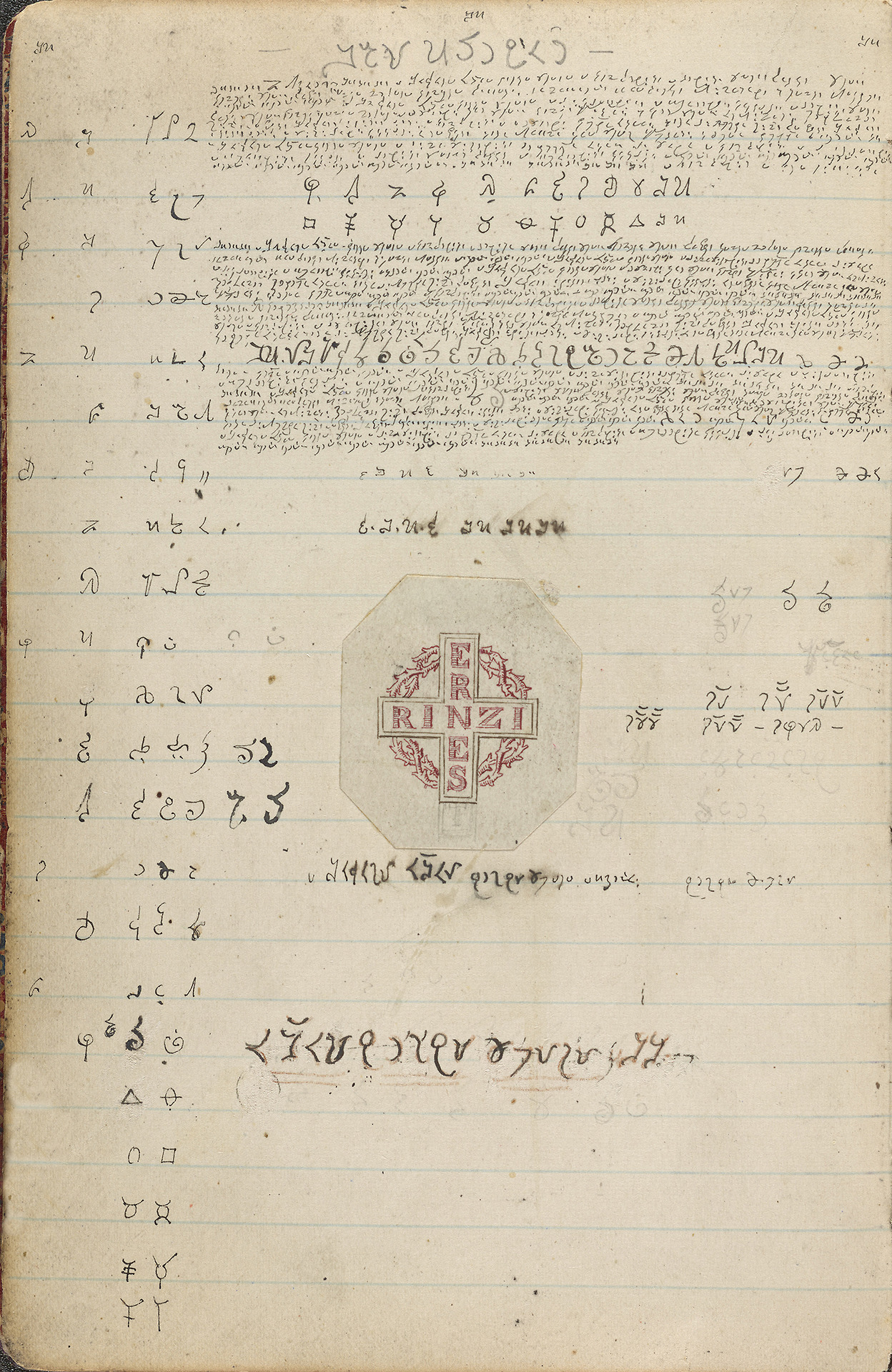 Rinzi used a secret alphabet of his own invention, in a minuscule hand that requires magnification to see clearly. While each journal page is ruled with twenty-one lines, Rinzi managed to fit over a hundred lines of text. The first page of the manuscript appears to contain a list of the characters or symbols Rinzi used in his alphabet, including Greek and Hebrew letters, astrological symbols and Chinese characters. 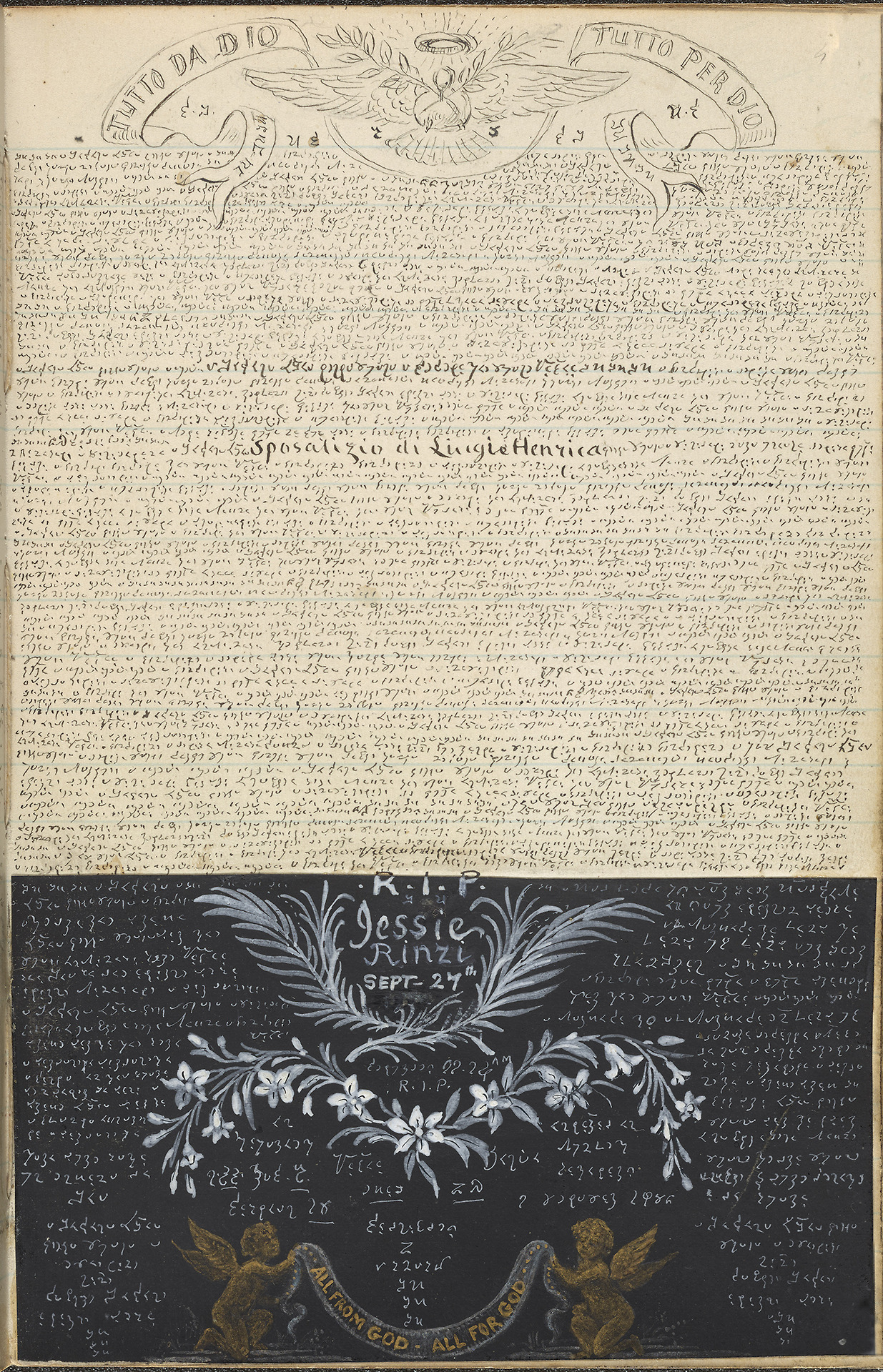 While most of the text is in code, some names and events appear in the clear, such as the assassination of King Umberto I in 1900, the death of Queen Victoria in 1901, the coronation of Edward VII in 1901, and the death of Rinzi’s wife in 1902.

What is especially fascinating about Rinzi’s journal, is the combination of art and encryption. As many pages contain cleartext sentences like ALL FROM GOD ALL FOR GOD, it is very likely that Rinzi was religious. It is well possible that his journal has a religious content.

Can the code be solved with frequency analysis?

Rinzi’s journal is not mentioned in the crypto history literature I know. If it is really unsolved (this is what the library’s Tumblr site says, but I haven’t checked other websites and discussion groups), it easily ranks among the most notable unsolved cryptograms in the world. If we only look at undeciphered encrypted books, this one is in my view the third most interesting one behind the Voynich Manuscript and the Rohonc Codex (there are, of course, many other great encrypted books, but they have been solved).

Considering the large amount of encrypted text the journal contains, it is unlikely that Rinzi used a complex encryption system. Most likely, he applied a Monoalphabetic Substitution Cipher (MASC), which means that each of the glyphs in the journal represents a certain letter of the alphabet. If this is the case, it should not be too difficult to break the encryption using frequency analysis. I don’t know if this has ever been tried.