Edgar Allan Poe once asked the readers of a magazine to send him encrypted messages. He could break all of them, except two.

As is well known, American writer Edgar Allan Poe had a keen interest in cryptography. His most famous short story, The Gold-Bug, centers on the solution of a ciphertext encrypted in a monoalphabetic substitution cipher (MASC). In 1840 Poe wrote an article for Graham’s Magazine titled A Few Words on Secret Writing, … 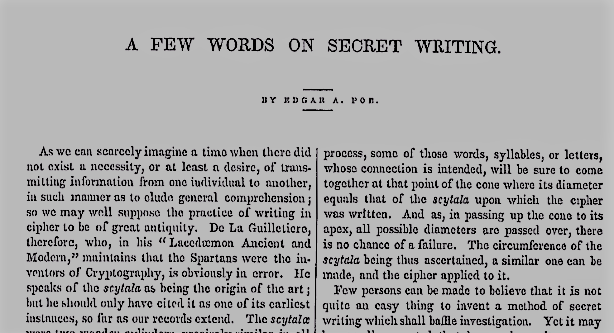 … offering a free subscription to the magazine to anyone who would send him an encrypted message he could not solve. Poe ended the contest six months later, claiming to have solved all of the cryptograms sent to him, except two.

Some of the challenges Poe received are available online in the Edgar Allan Poe Digital Collection. For instance, here’s a cryptogram a certain Schuyler Colfax sent to him in April 1840:

Poe was able to break it. He published the following solution:

Poe wrote about it:

This is by far the most difficult cypher which we have received. Some of the words are crowded together, and the writer has taken other liberties which do not come within the conditions originally laid down. For example, in some cases the figure 3 stands for I, in others for O; in some cases the figure 6 stands for L, in others for T; while 2 stands for E and M indifferently, and 9 for both W and A. Some words, moreover, are mix-spelt. How much the difficulty of solution is increased in this way, may easily be conceived. The translation, however, is as follows:

CHURCH-YARD.
I wander in the city of the dead
Midst streets of houses mouldering to decay.
Where is the pride of riches? it is fled.
Where pomp and circumstance? all passed away.

Here are two more (the scans are not readable, so I used the transcription provided on the website):

According to Wikpedia, “Poe’s success with cryptography relied not so much on his deep knowledge of that field (his method was limited to the simple substitution cryptogram) as on his knowledge of the magazine and newspaper culture. His keen analytical abilities, which were so evident in his detective stories, allowed him to see that the general public was largely ignorant of the methods by which a simple substitution cryptogram can be solved, and he used this to his advantage. The sensation that Poe created with his cryptography stunts played a major role in popularizing cryptograms in newspapers and magazines.”

Poe concluded the competition by publishing the only two ciphers he couldn’t solve. They were ostensibly sent in by a certain Mr. W. B. Tyler. Some believe that Poe created these two challenges himself. It lasted over 150 years before they were broken. This story is told in my book Codeknacker gegen Codemacher and on this website.

I wish there was a complete collection of the 100 cryptograms Poe received. Does a reader know if something like this is available? Does some archive have the originals of the ciphertexts?

Let me conclude with a challenge that is easy to solve. Can you see the hidden message in te following poem? 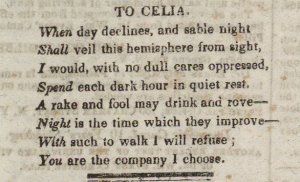 Further reading: Who can break these three encrypted postcards?