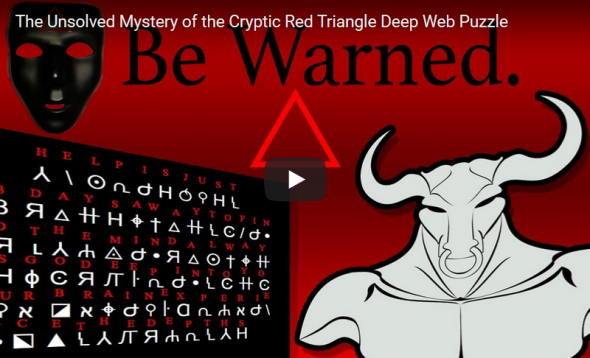 A new internet mystery game, named “Red Triangle”, has surfaced. Meanwhile, six chapters with crypto puzzles and other challenges are known to exist. Is the Red Triangle the new Cicada 3301?

On November 19th, 2017, a new mystery game hit the internet. An anonymous user posted a series of hexadecimal numbers during a YouTube live-stream about Tengri-137 (another internet mystery game) hosted by Defango. The YouTube user name of  the anonymous poster was 0a 0a. Thanks to blog reader John Haas for informing me about this exciting new mystery.

The hexadecimal numbers published on Youtube translated into a link which led to the first chapter of the Red Triangle game. Meanwhile, six chapters have been discovered. Each one contains a series of challenges, some of which are cryptographic in nature.

The name Red Triangle originates from the image of a red triangle on top of each challenge.

Readers of this blog certainly know Cicada 3301, the most popular internet mystery gameso far. Cicada 3301 started in January 2012 with a new round beginning every year in January. Each round consisted of a chain of puzzles, many of which involved cryptography or steganography. It is completely unknown who was behind this strange game and what the purpose of it was. After Cicada 3301 had gained much popularity during the first few rounds, not much happened in later years. In January 2015 no new puzzle showed up. Round 5, which started in January 2016, didn’t attract much attention (I’m still not sure whether the puzzles that were posted were genuine). In January 2017, again, nothing happened. I haven’t heard anything in January 2018, either.

The Red Triangle could be the new Cicada 3301.

The main website dedicated to the Red Triangle game is the Red Triangle Wiki. There you find information about all the six chapters known so far. Chapter 1 features the following two pigpen cryptograms: 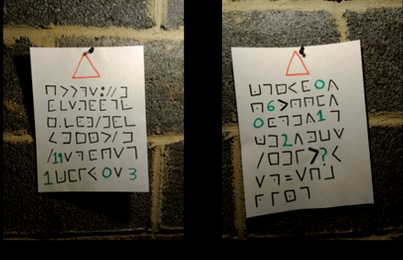 Here’s a crypto puzzle from chapter 3: 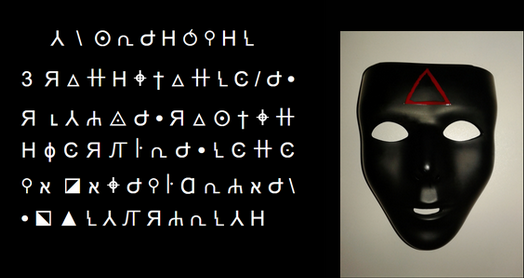 Chapter 6, the latest one to have surfaced, was discovered on January 6, 2018. The Red Triangle Wiki gives a detailed description. As of January 13, 2018, the following entries are the latest ones available about this chapter:

Does a reader know how to proceed from here?

There’s a video on YouTube giving an introduction on the Red Triangle:

There have been other internet mystery games over the last few years, but none was nearly as elaborate and sophisticated as Cicada 3301. Most of them disappeared after a short time. However, the Red Triangle might be different. The fact that already six chapters have been put forward shows that this game is more than a dalliance of a few bored puzzle fans.

One of the main questions about Cicada 3301 was who organized it and why. This question was never answered. The same is true so far for the Red Triangle. Maybe, some day we will learn who is behind this strange game.
Follow @KlausSchmeh