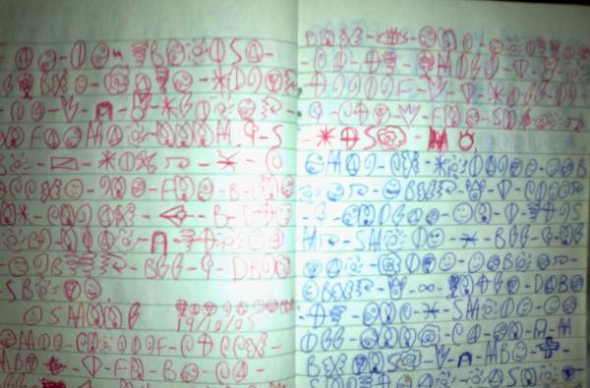 Today I am going to introduce two encrypted diaries. Only one of these is solved. Can a reader decipher the other one?

Encrypted diaries are an interesting topic for crypto history enthusiasts. My encrypted book list meanwhile contains about 25 diaries written completely or partially in a cipher. As diary authors usually avoid complicated encryption methods, almost all of these documents have been deciphered. In addition to the diaries on my list, there are a few more that only contain small pieces of encrypted content (like the journal of Czech poet Karel Hynek Mácha).

When I recently googled for encrypted diaries, I encountered two specimen I hadn’t known before. I included them as numbers 00090 and 00091 in my encrypted book list.

Encrypted book #00090 on my list is a diary kept by a person named Clara (the surname is not known to me). It is described in an article written by medicist John Essex. Essex’ article depicts two excerpts from the diary; here is the first one:

Here is the second excerpt from Clara’s diary:

As can be seen, Clara used a variant of the pigpen cipher to encrypt passages of her journal entries. According to John Essex, this cipher has been broken, which is not surprising, as pigpen codes are easy to decipher for an experienced codebreaker. Essex mentions that Clara used SHIT as a password to create the pigpen table. However, he doesn’t explained exactly how this worked. Can a reader find out the details of Clara’s pigpen table and decrypt the enciphered passages shown above?

Encrypted book #00091, which is also a diary, appears to be a lot more difficult to break. It is mentioned in a British online discussion forum named The Student Room. A poster named manic_fuzz reports that in his youth he kept an encrypted diary. Here’s a scan of a double page he provides (sorry for the bad quality): 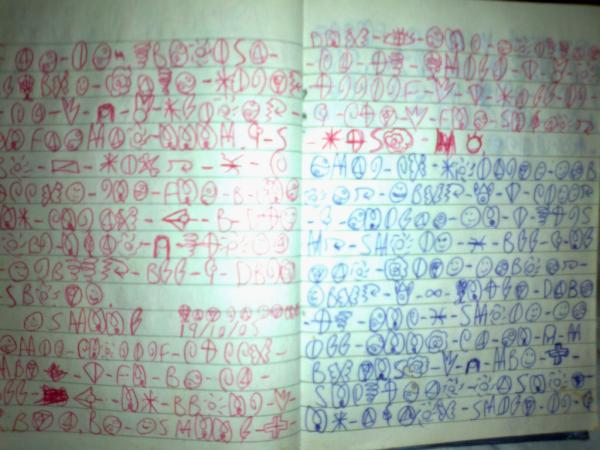 manic_fuzz writes that he doesn’t understand his own writing any more (but he still has a key, so he could decipher it, if it should be necessary). Can a reader break this encryption? manic_fuzz writes: “Most of the symbols represent letters, although some represent pairs of letters or whole words which usually throws people off.”

Of course, I assume that manic_fuzz has taken into account that people will try to break his encryption. Nevertheless, if you can break the cipher, please post the cleartext only if you are sure that publishing it does not offend the diary author.
Follow @KlausSchmeh