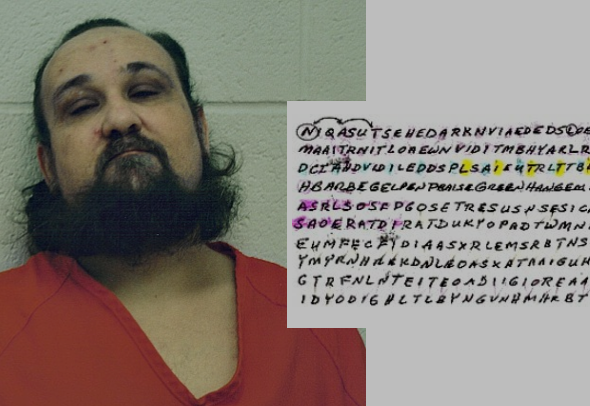 Nathaniel Bar-Jonah (1957-2008) was a felon convicted of kidnapping and sexual assault. According to a book, he left behind an encrypted note that has never been solved.

Two years ago, I blogged about a story that was new to me (Craig Bauer, editor in chief of Cryptologia and author of the book Unsolved! History’s Greatest Ciphers had made me aware of it): the case of Nathaniel Bar-Jonah.

Nathaniel Bar-Jonah (born David Paul Brown) was a US citizen convicted of kidnapping, aggravated assault, and sexual assault of various children in 2004. He received a 130-year prison sentence without the possibility of parole. He died in a Montana prison in 2008. 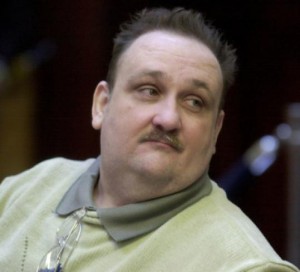 Bar-Jonah had evidence against him for the murder of ten-year-old boy Zachary Ramsay. After Ramsay’s death, Bar Jonah brought spaghetti with a sweet tasting meat sauce to his neighbors. He was also reported to have given away burgers and held cookouts. Although he was not a hunter, he told his guests that it was deer that he had killed and prepared. In Bar-Jonah’s apartment, detectives found a number of recipes with titles such as “little boy pot pie” and “french fried kid”. For these reasons, the media referred to Bar-Jonah as a cannibal.

Bar-Jonah had already been arrested in 1991 in Massachusetts for getting into a car where a seven year old boy was sitting while his mother was in a store. Bar Jonah, who weighed 125 kilograms, sat on the boy until the mother returned. Although he had previous violent sexual assaults on children, a judge did not imprison Bar-Jonah but stated that he had to leave the state and move to Montana, where his brother lived (it was not communicated to the Montana authorities that Bar-Jonah was a violent sexual offender). 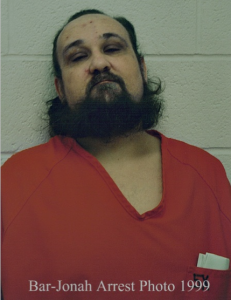 The Wikipedia article about Nathaniel Bar-Jonah mentions a “decoded journal”. However, the reference given (a comprehensive website about the Bar-Jonah case) doesn’t contain any information about it. The only thing I found was an encrypted note mentioned on a different website.

In November 2016, I blogged about the Bar-Jonah case. In my post, I referred to the encrypted note depicted on the website. However, my readers immediately told me that this scan had no relation to Bar-Jonah. In fact, it was the so-caled Tel Dan inscription. Apparently, the author of the webpage had used this note for illustration without mentioning that it had nothing to do with the case.

Recently, I searched the internet for information about the Bar-Jonah case again. I found a Reddit forum that linked a scan of an encrypted note Bar-Jonah had created (taken from the book Eyes of A Pedophile by Betty Kuffel). Here it is (I hope, this time it is genuine):

According to the Reddit post, investigators easily deciphered this note. If one skips two letters at different points in the sequence, it spells out things such as: NATHANAEL , KIDSEX, ROASTED CHILD, LITTLE BOY STEW etc..

The Reddit post also mentions a second cryptogram Bar-Jonah created. When he was arrested, a piece of paper was found in his wallet with nine words:

This message is also mentioned in the book There is No Body: A Journey Through The Dark Boroughs of a Paedophilic Cannibal’s Mind. by John C. Espy. Neither the Reddit post nor the book does provide a scan of the original message. Apparently, this cryptogram has never been solved.

As can be seen, all the words in the cryptogram are pronouceable, but they have no obvious meaning. Usually, ciphertexts of this kind are encountered when a codebook code was used. Of course, it is possible that Bar-Jonah used a codebook or codelist for concealing his writings. However, no book or list of this kind has ever been found. Anyhow, it is far from clear that this note is a ciphertext at all. It could also be a list of Bar-Jonah’s passwords or something completely different.

If you have an idea of how to decipher or otherwise make sense of this note, please leave a comment.
Follow @KlausSchmeh