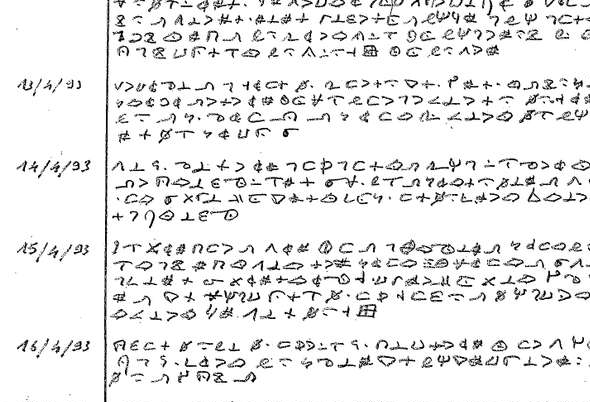 A French magazine article reports on an encrypted diary written by a pedophile priest. The plaintext is not known to me. Can a reader break it?

Every once in a while I search for terms like “encrypted postcard” or “letter in code” on Google, and usually I perform such a search in different languages. Yesterday, I tried “journal crypté”, which is French for “encrypted diary”, and in fact, I found an interesting story.

The first hit that came up led to an article titled Journal crypté d’un prêtre pédophile: le procès du silence de l’église published in 2017 in a French online magazine. The title translates to “The encrypted diary of a pedophile priest: the process of church silence”. The article provides the following scan of the diary mentioned in the headline: 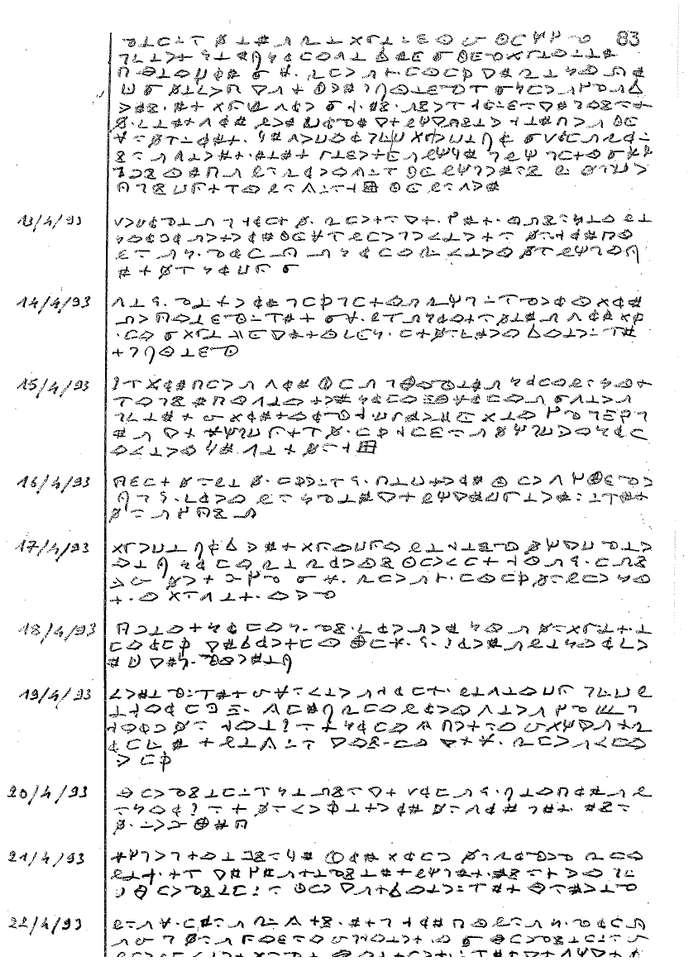 As the title implies, this diary (I took it on my encrypted book list, identification number 00095) was written by a French priest who was accused of pedophile offenses. The scan shows a diary passage from the 1990s. This passage is contained in volume 4 of the diary, which fills over 300 pages. I don’t know if there are more volumes.

The priest in question worked in a parish in the diocese of Orléans, France. In 2017, now 63 years old, he was tried for acts of sexual abuse of minors by a person in authority. He was accused of having sexually touched boys under the age of 13 during a summer camp organized by a Christian organization in July 1993 (this means that it took 25 years before the crime was brought on court). According to press reports from November 2018, the priest was later condemned to two years in prison.

Can a reader decipher it?

I wish, I could tell my readers more about the content of this article, but only the first few paragraphs of it are readable, while the rest is hidden behind a paywall. To my regret, it is not possible to pay for a single article – instead it is required to start a subscription.

The plaintext of the diary excerpt isn’t known to me. Perhaps, it is given behind the paywall, but I doubt it. So, I hereby ask my readers for help. Can somebody decipher this cryptogram? The plaintext is probably French. The cipher used is most likely a simple letter substititution (diary authors rarely use more sophisticated encryption methods, otherwise writing in cipher gets too complicated). So, if you succeed in deciphering this ciphertext, please leave a comment.

Considering that the author of the diary abused children at about the same time when the passages shown were written, it is certainly possible that the content is embarrassing. If this should be the case, I will certainly delete the respective passages from the comments after a few days. Anyway, it would be great to have this text deciphered.
Follow @KlausSchmeh

Further reading: An unsolved cryptogram left behind by a suspected child killer and cannibal