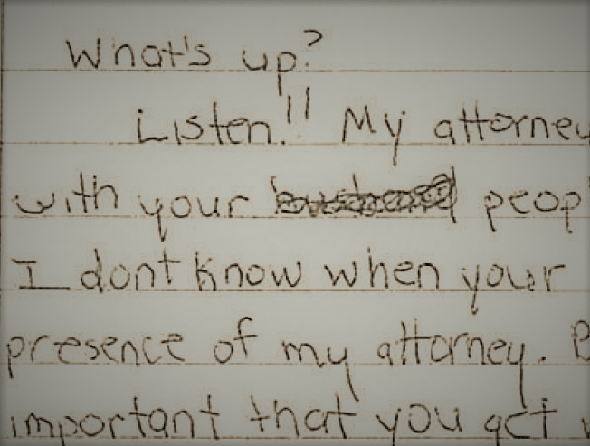 A US magazine has published a letter containing a hidden message written by a prison inmate. The message is given, but the method used has not been published. Can a reader solve this mystery?

Blog reader Thomas Bosbach has made me aware of an interesting article published by the Business Insider in February 2018.

According to this article, an inmate of Fulton County Jail in Atlanta, Georgia, tried to send the following letter to a recipient outside the prison: 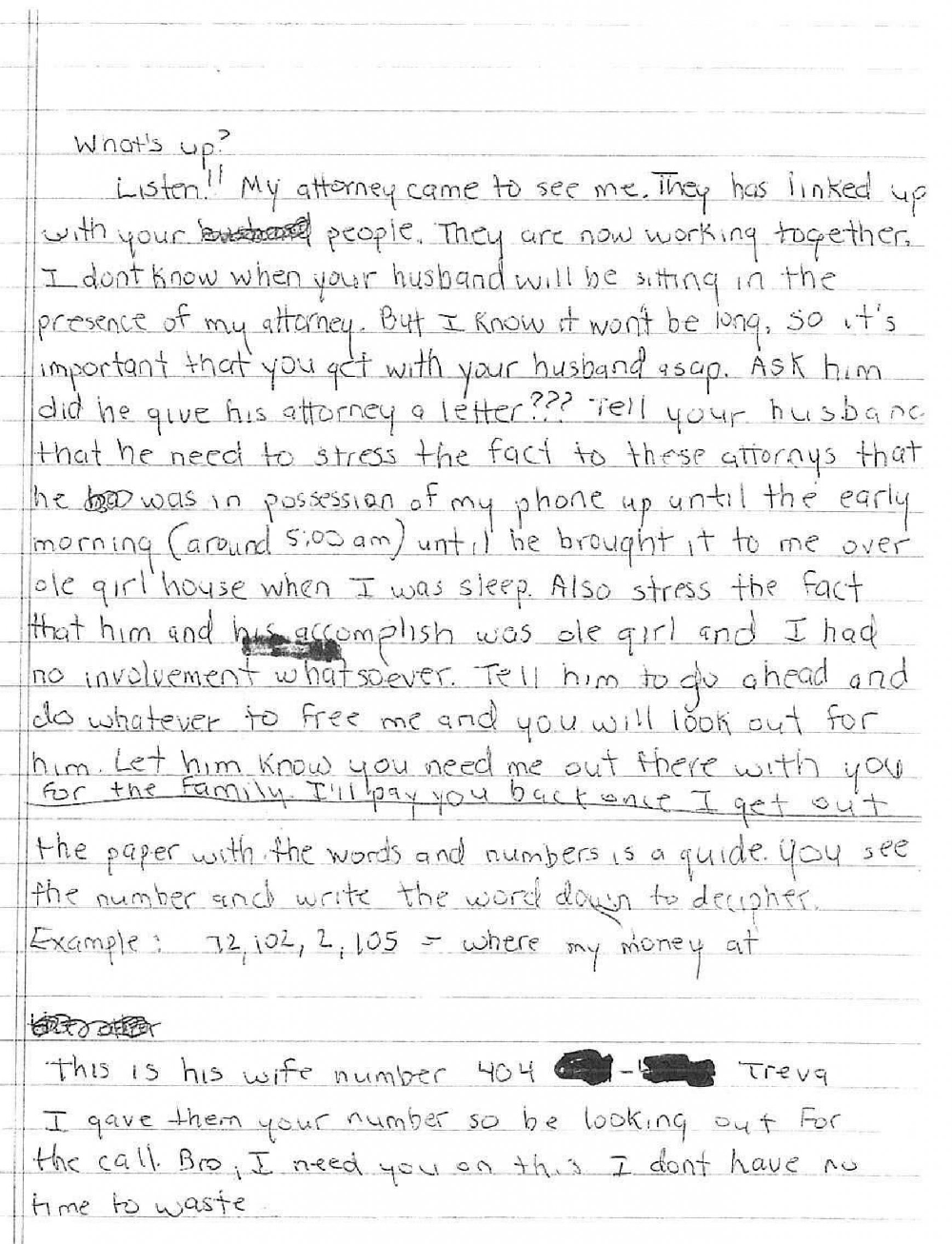 This letter looks innocuous at first glance, but the prison staff thought it deserved a closer look. After all, the sender of the note, a man who was in jail because of murder, armed robbery and aggravated assault with a deadly weapon, had an affiliation to an organized gang. As mentioned before on this blog, it is quite common that prison gangs use encryption and steganography. For those interested in this topic, I recommend Gary Klivans’ book Gang Secret Codes: Deciphered. 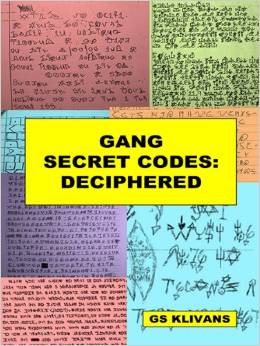 How does the steganographic code work?

The anonymous codebreaking expert found out that the prison letter contained a hidden message. This message instructed the recipient to murder a certain prison staff member. This means that we deal here with a steganographic murder assignment – I wish, I had known about this, when I wrote the last edition of my steganography book Versteckte Botschaften. There is a similar story, which happened in Colorado and was published by afore-mentioned CRRU. I blogged about it five years ago (in German).

Acording to the Business Insider article, the message hidden in the letter reads as follows (the X’s stand for blackened passages):

Here is the draft decryption of the item you submitted to us today reference inmate XXXXX:

PUT A TEAM TOGETHER AND CEASE THIS RAT. HER NAME IS XXXXX. HER ADDRESS IS XXXXX CUSHMAN CIRCLE XXXXX.

GET A WALMART CREDIT CARD IN A ALIAS. THEN LOOK UNDER THE WHITEPAGES FOR TXXXXX SXXXXX YXXXXX TXXXXX IS THE RAT. YXXXXX LAST ADDRESS IS XXXXX OGLETHORPE DRIVE APARTMENT XXXXX.

I WROTE FAT HEAD A LETTER THE NIGGA GAVE IT TO HIS LAWYER. I DO NOT KNOW HIS MOTIVE. I DO NOT TRUST THE NIGGA

I NEED YOU TO MANIPULATE THE NIGGA WITH MONEY AND THE FAMILY TO FREE ME.

MY LOYALTY IS TO YOU AND THE FAMILY. PRESS THE GASS ON THIS I OWE YOU MY LIFE FOR THIS

Please don’t hesitate to contact me if you have any questions.

Now, I wonder how the steganogrphic encoding worked. My first guess was that some of the letters in the text are marked, but so far I couldn’t spot any markings. As an alternative, a Bacon cipher (i.e., a binary code based on two different ways to write a character) might have been used, like in the Colorado case mentioned above.

Can a reader find out how the message was encoded? If so, please let me know.
Follow @KlausSchmeh