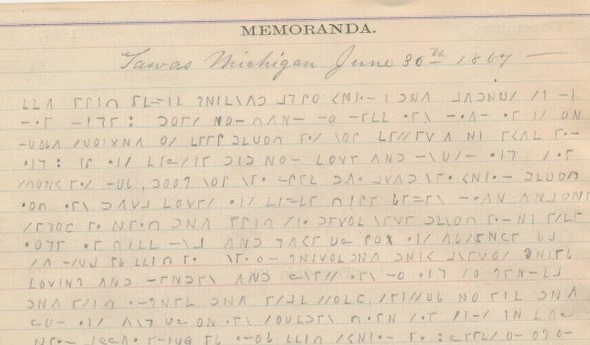 In the 19th century, a sailor working on the Great Lakes kept an encrypted diary. Can a reader decipher it?

Encrypted diaries have always been a popular topic on this blog. My encrypted book list contains over 25 diaries that are written in cipher, and I’m sure, there are many more. Among the ones  I have covered on this blog are Donald Hill’s steganographic diary, Olga Romanova’s journal, the Isdal woman’s diary and the journal of a pedophile French priest. In addition, I co-wrote an article about encrypted diaries (especially about the one of Italian spy Antonio Marzi) for Spiegel Online together with Tobias Schrödel.

Thanks to Google, I recently found another encrypted diary on the internet (I put it on my list at position #00097). To my regret, only a single page from this journal is available so far, but perhaps my readers can help to find out more.

The source for this cryptogram is, once again, Reddit. In 2013, a Reddit user nick-named Juiceboqz published a post with the following title: “Came across a page in a 19th-century sailor’s journal written in code. Can anyone help me out with this?” Juiceboqz chose the Puzzles Group of Reddit for this publication, though the Codes Group, which is dedicated to unsolved crypto mysteries, would certainly have been the better choice. Here’s a scan of the page Juiceboqz found: 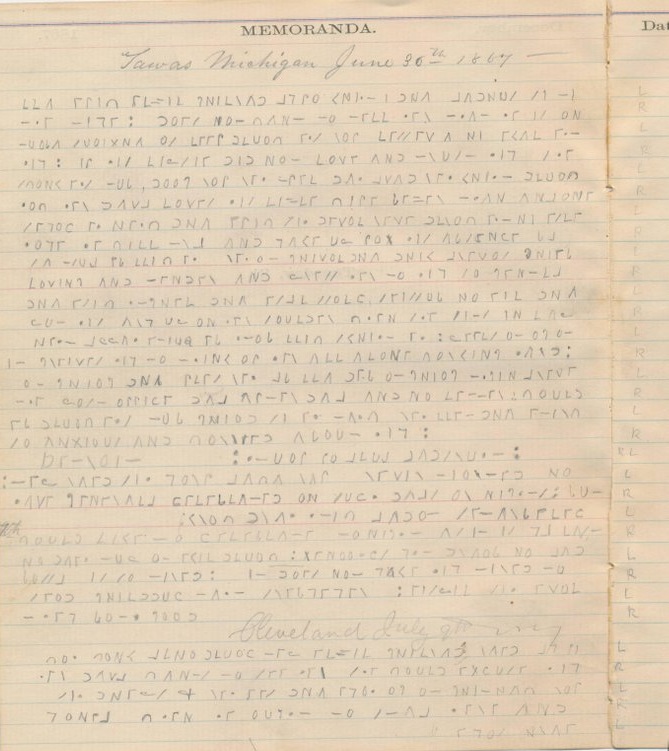 Apparently, two diary entries can be seen on this page. The first one is headlined (in the clear) “June 30th 1867 Tawas, Michigan”, the second one “Cleveland July 9th ????”. Tawas is located on Lake Huron, Cleveland on Lake Erie. As it seems, the author of the diary worked as a sailor on the Great Lakes in the years after the Civil War.

Note that each encrypted line is marked with an R or an L at the end. This might mean that R-lines are to be read from right to left and L-lines from left to right (or the other way round?). Apart from this, this cryptogram looks like an ordinary MASC ciphertext.

According to Reddit user omnilynx, the first line of the plaintext reads (from right to left): “It is Sunday and I think of my darling little wife all the time.” This decryption appears to be correct. As many of the encrypted diaries I have seen cover love and sexuality issues, it is not surprising that the first decrypted line of this one refers to the authors wife. Can a reader decrypt more of the ciphertext?

Of course, it would be interesting to learn more about the anonymous sailor (if he was a sailor at all) who wrote this diary. What was his name? Who was his wife. Perhaps, some information of this kind is contained in the cleartext of this encrypted page. And then, it would be great to find more pages of this diary. This might be difficult, considering that we deal with a 150-year-old document, but who knows?
Follow @KlausSchmeh