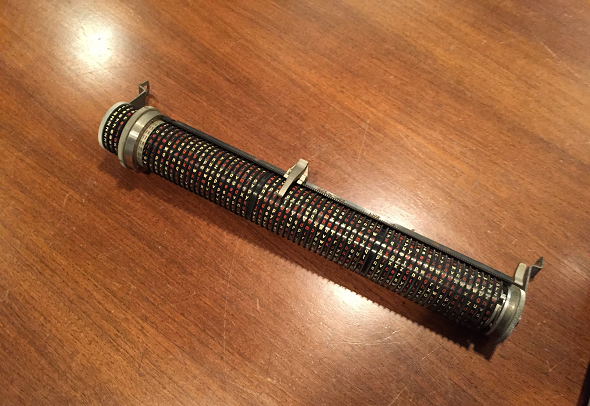 In WW2, Berlin-based company Heimsoeth & Rinke not only produced the Enigma, but also a cipher cylinder, about which as good as nothing is known. Can my readers help to research the history of this device?

In the Second World War, the Germans used or designed some 20 encryption machines, including the Enigma, the Lorenz machine and the T-52 (Geheimschreiber). If you want to know more, check the blog article about German WW2 encryption machines I published last year.

Among all these designs, one German encryption device from WW2 is especially puzzling: a cipher cylinder, about which as good as nothing is known. It bears a label of Berlin-based company Heimsoeth & Rinke, which is known to have manufactured the Enigma. I call this device “HR cylinder”. Only one copy of the HR cylinder is known to exist. It is owned by the National Cryptologic Museum in Fort Meade near Washington. Here is a picture I took there:

Five years ago, I published my first blog post about the HR cylinder (in German). This article received many page hits and my readers published a few interesting comments. Anyway, the background of this device remained a mystery. It is not known when exactly it was built and who was supposed to use it. I am not aware of a written source that mentions the HR cylinder (except for a Cryptologia article by Louis Kruh and my book Codeknacker gegen Codemacher, but both contain no additional information).

I don’t know how the HR cylinder was used. It probably worked like any other cipher cylinder (here’s a picture that explains how a text is encrypted). The history of cipher cylinders goes back to the 15th century, but this type of encryption gained popularity only after the First World War. The most successful cipher cylinder variant is the M-94, which was used by the US military in the 1920s: 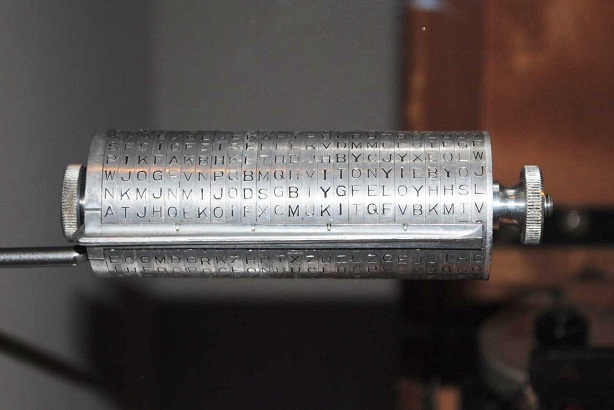 The HR cylinder is bigger and includes more rings than the M-94, which was designed as a pocket device. Here is a closer shot: 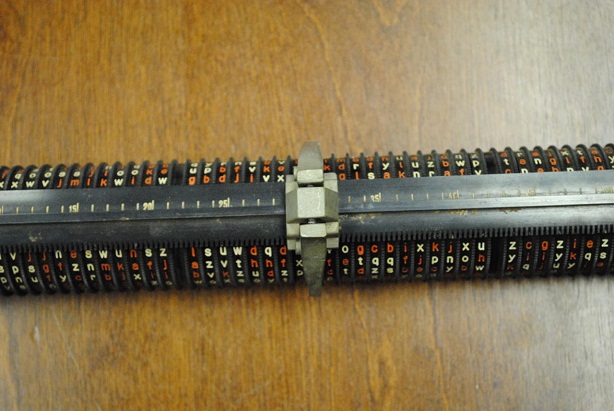 On the following picture, the name of the producer can be seen :

Apart from the Enigma and the HR cylinder, I don’t know of any other cipher device Heimsoeth & Rinke produced.

The HR cylinder certainly was not designed as a high-security cryptograph and was not meant to encrypt long messages. Its cryptographic strength is probably lower than the one of the Enigma. As the HR cylinder doesn’t have a keyboard, encrypting a message with it is less convenient than with other encryption machines of the time. On the other hand, the HR cylinder was cheaper to produce and more robust than the Enigma and similar devices.

The HR cylinder of the National Cryptologic Museum comes in the following case:

The fact that the HR cylinder owned by the National Cryptologic Museum is the only one known suggests that this copy is a prototype. If so, it must be an advanced prototype, as it bears a serial number, comes in a case and bears a producer label. It looks pretty mature to me. 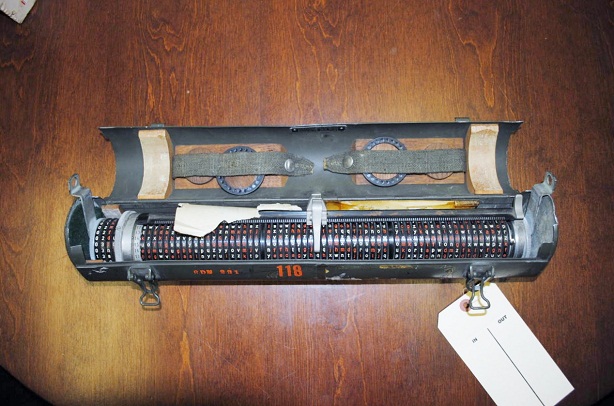 In the Cryptologia article mentioned above, Louis Kruh stated that the HR cylinder was probably not used by the military or the diplomacy. Then he wrote: “There remains (unlikely) RLM Forschungsamt, RSHA, Gestapo (Secret Police) and SD. Cryptographically mediocre institutions like Parteikanzlei (Nazi Party organizations), Reichskanzlei (Civil Administration), Railroad, Post Ofﬁce which were denied unrestricted use of the Enigma and might have looked for other devices.”

Richard SantaColoma wrote: “This one looks to me… just a guess of course… that it was intended to be attached to some standard typewriter, and used as a ‘cipher guide’. The clamps at the ends point to this, as does the high number of wheels… maybe, one for each typewriter column? If this is correct, then the operation would be very slow, and manual. But also, it might make sense because the user would not have to carry a whole, big and heavy, typewriter to a remote location (or an enigma). They would only need to find a typewriter to use once they got there… and convert it to a cipher machine, with this. The accessory wheels could be adapters for different models?”

There are two interesting aspects I didn’t cover in my first blog post about the HR cylinder: 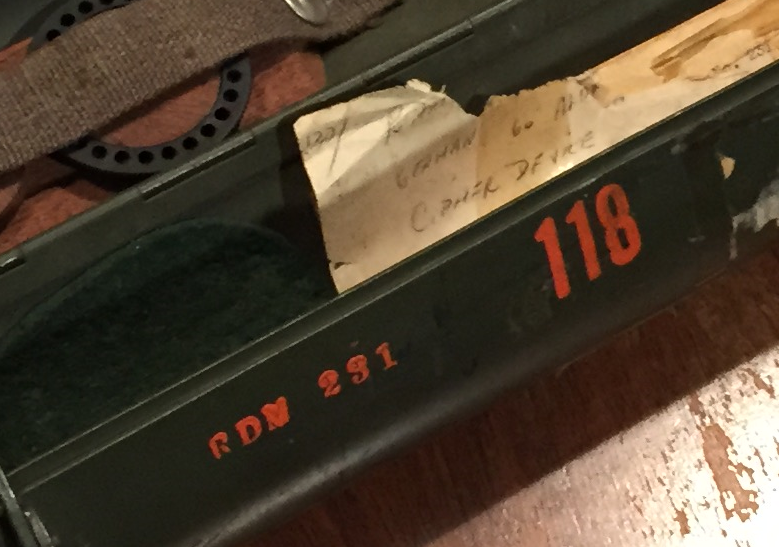 Can a reader say more about this device?
Follow @KlausSchmeh