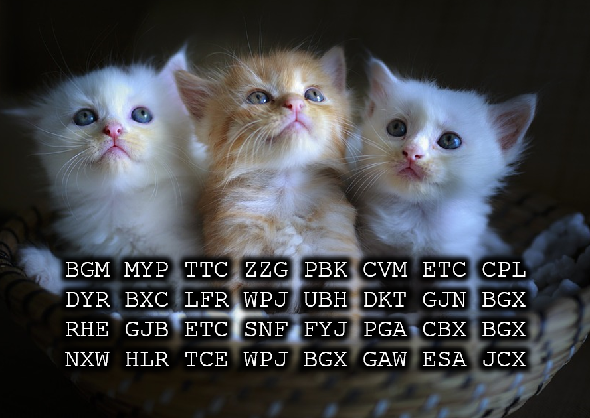 The “Playfair for Three” is a manual cipher that works similar as the Playfair, but is based on trigraphs instead of digraphs. Can you solve a challenge cryptogram that has been made with this method?

As frequent readers of this blog know, the Playfair cipher is an interesting manual encryption system. It is easy to use and more secure than most methods of comparable complexity. Nevertheless, the Playfair can be broken today, if the ciphertext isn’t too short. Hill climbing has proven a powerful method for attacking the Playfair cipher.

For those who don’t know: the Playfair cipher is an encryption method that substitutes letter pairs (digraphs) based on a set of simple rules. Check here for a description of the method.

In recent years, I have published a number of Playfair challenges of my own design on this blog. All of them were based on random matrices (i.e., no password was involved), which prevented a dictionary attack. The shortest Playfair cryptogram of this kind that was broken by my readers consisted of 40 letters. It was solved by Nils Kopal with hill climbing.

The longest Playfair ciphertext that has withstood all codebreaking attempts so far has 30 letters. Considering that several skilled codebreakers, including Nils Kopal and George Lasry, couldn’t break this challenge, I assume that it is quite difficult to solve a 30 letter Playfair ciphertext, let alone a shorter one.

A question that is both obvious and interesting is the following: is it possible to create a cipher that is more secure than the Playfair if trigraphs (i.e., letter triples) instead of digraphs are used? I addressed this issue in a blog post I wrote last year. In this post I mentioned a trigraphic Playfair variant named Playfair for Three introduced by John Savard on his website, but I didn’t  go into detail about it.

Now, almost a year later, I think it’s time to take another look at Playfair for Three. To explain the method, Savard uses the following matrix (apparently, it is not based on a keyword):

The Playfair for Three substitution rules are a little more complex than those of the standard Playfair, but still not very difficult:

If all three letters are the same, replace them by three repetitions of the letter diagonally below and to the right of that letter. Thus: MMM becomes JJJ in the square above. Below, and to the right, are always interpreted cyclically, so DDD becomes RRR, and PPP becomes NNN, and even III becomes TTT.

If two of the letters are the same, encipher the two letters as if they were part of a digraph to be enciphered with Playfair.

When all three letters are different, follow these rules:

Can a reader decipher this challenge?

Considering that an ordinary Playfair cryptogram of this length can be solved quite easily with hill climbing, I assume that this challenge is breakable, too. If a reader comes up with a solution, I will certainly publish a shorter Playfair for Three challenge in the near future.

If it turns out that this ciphertext can’t be broken or at least that breaking it is very difficult, we can conclude that John Savard has invented a remarkable encryption system. Either way, the result will be interesting.
Follow @KlausSchmeh