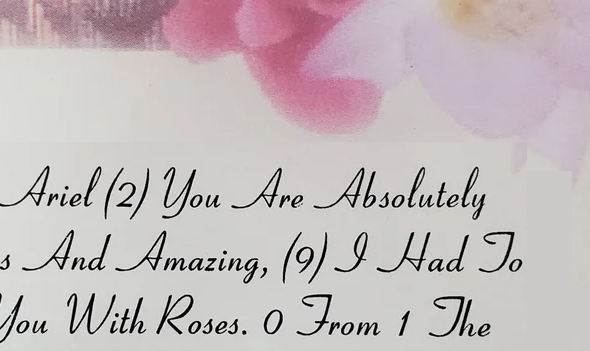 An anonymous note published on Reddit contains a number of digits and a reference to a Beatles album. Is there a message hidden in this text?

Once again, I have found a nice crypto mystery in the “codes” group on Reddit. This time, it’s a greeting card with a message sent to a woman named Ariel. It was originally published in the Reddit “puzzles” group by a user named Toadby and then cross-posted to “codes” 11 days ago. Apparently, the mystery is still unsolved.

Here’s a scan of the greeting card: 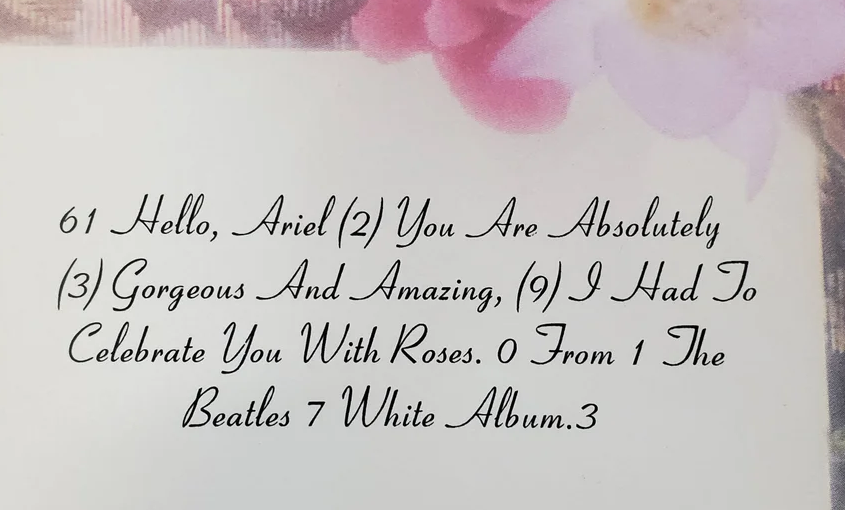 Like so often in the Reddit “codes” group, no background information on this cryptogram is provided. So, we don’t know who received this message and where it was received. Considering that the post is titled “Code in a secret admirer message?”, we can assume that the sender of the card is not known.

The recipient is probably female, though Ariel is also used as a male first name. In the English-speaking world, most women named Ariel having a Wikipedia entry live in the USA, Canada, or Australia, so this message might stem from ones of these countries. In Germany, by the way, “Ariel” is as good as unknown as a given name, probably because a laundry detergent is called this way.

At least, a transcript of the message is provided on Reddit:

As can be seen, we are dealing with a cleartext message that contains a number of figures and a reference to the White Album, the ninth studio album and only double album by the the Beatles. The White Album, published in 1968, is actually called The Beatles, but to avoid confusion, the name derived from the color of its cover is used.

The first obvious question about this message is what the numbers mean. Do they represent a telephone number? Or an encrypted message? A comment on Reddit states that 61 is the country code for Australia, but there are too few remaining digits for a valid Australian phone number.

The second question is why the Beatles’ White Album is mentioned at the end of the text. Does a song on this double record contain the key to decipher a message hidden in these lines? Apparently, none of the Reddit commenters has found anything like this. So let’s look at the tracks on the White Album:

To my regret, I don’t see a connection between any of these song titles and the admirer message. Perhaps, a reader knows more. If so, please leave a comment.
Follow @KlausSchmeh