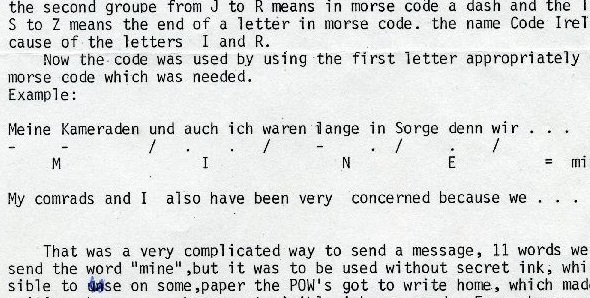 Numerous steganographic methods have been used by prisoners of war to hide messages in letters to their families. Here’s one I didn’t know before.

In the Second World War, British prisoners of war in Germany were usually allowed to send letters to their families. The British intelligence organisation MI9 took advantage of this and developed a number of sophisticated steganographic methods British military officers could use while in captivity to hide secret information in their messages. I blogged about these techniques several times.

There are many other examples of prisoners-of-war steganography that were used in War War I, World War 2 and at other occasions, some of which are covered in my steganography book Versteckte Botschaften. At the 2017 NSA Symposium on Cryptologic History, I gave a talk about “The Use of Steganography in World War I”, which covered techniques of this kind, too.

The Canadian cipher machine collector and crypto history expert Richard Brisson has now forwarded me the description of a steganographic method I had never heard of before. It was designed for German navy officers for the case that they were imprisoned during the Second World War. Here’s a scan of it: 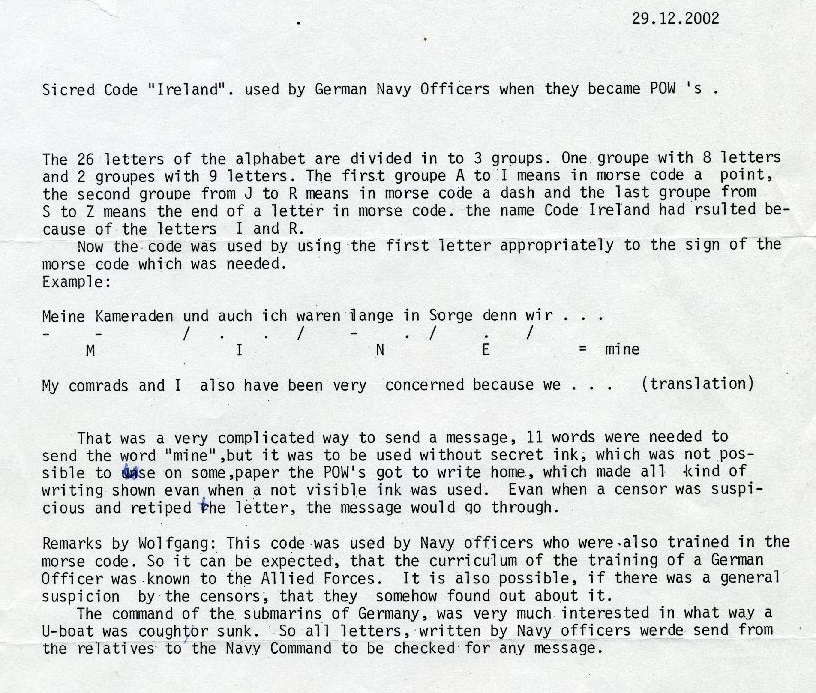 The system was named “Ireland”, not for the country but because the letters I and R play an important role in it. The concept of this method is quite simple. Every letter of the alphabet either stands for a dot, a dash or a blanc:

Using these representations as starting letters of the words in a letter, a prisoner of war could encode a secret Morse message. The example mentioned in the description is the following German sentence:

This leads  to the following sequence of word initials:

With the table above, this leads to the following Morse message:

This decodes as follows:

This means that the word MINE is hidden in the said German sentence.

Does it work in practice?

This code is much simpler than the one used by British prisoners of war at the same time. But does it work well? Let’s try to encode the word CRYPTO with it. This word is written in Morse as follows:

So, we need a text with word initials fromm the following sets:

It took me about ten minutes to come up with the following message:

My dear Mary Anne, the first of April was particularly cold, lonesome, loveless, windy, and noisy. People are so poor that one pities many.

Considering that I didn’t spend much time on this try, the result doesn’t look too bad. I can imagine that prisoners of war in the Second World War did much better and that the system worked reasonably well.

Neverthe less, Richard wrote: “Although I’ve seen quite a few letters to/from German POW’s, I don’t believe that any employ the IRELAND Code.”

Does a reader know more about this technique? Was it used in practice? Any comments are welcome.
Follow @KlausSchmeh