Last year, a Nebraska prisoner sent an encrypted message to his girl-friend, who was kept in the same jail. The content of the note was not a love message.

A murder or an accident?

Aubrey Trail had missed much of his trial after slashing his own neck in the courtroom. He returned, with his scars clearly visible, to testify in his own defense. Trail admitted that he had killed Loofe, but maintained that her death had happened accidentally during a rough sexual intercourse. Loofe’s body was found three weeks later in a number of plastic bags. It was cut into 14 pieces.

Along with Trail, his girlfriend Bailey Boswell was charged with murdering Loofe. Boswell’s trial started last week and is still going on. Boswell might be condemned to death, too.

Before I read about this story, the only Nebraska murder case I was aware of was the (fictive) one described in the 1992 Richard Marx song Hazard.

The victim of the killing described in this Rock music classic is a woman, too. However, there are a few major differences between the two crimes, so there is no need to assume that Richard Marx had the gift of prophecy.

What makes the Loofe murder case interesting for this blog is that during his trail, Aubrey Trail tried to send an enrypted message to his girl-friend, Bailey Boswell who was kept in the same prison. This is mentioned in an article published last year, shortly before the verdict.

Like so often when it comes to criminals using ciphers, not much is known about the background of this ciphertext. The article doesn’t mention how this note was meant to be transported and how the guards discovered it. At least, we have a description of the cipher created by Trail himself: 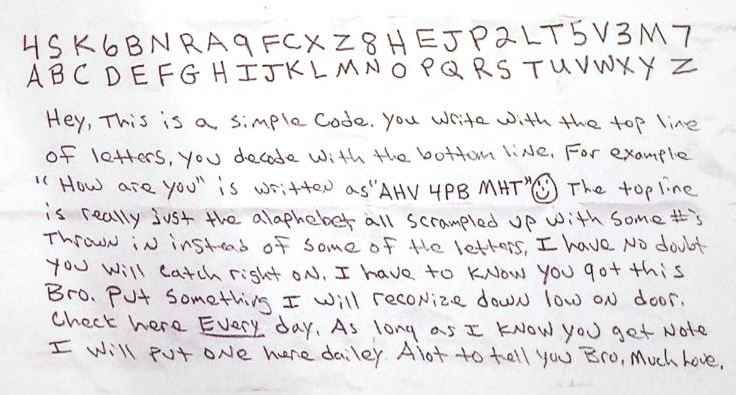 Again, we do not know how Trail wanted to send this key to his girl-friend and how the prison staff found it. In the text below the key, it says “put something I will recognize down low on door”. I assume that this is an instruction for Boswell, but it doesn’t explain how the transporting of a message was supposed to work. “Bro” looks like a short form of “Brother”, but it’s probably a nickname Trail uses for his girl-friend.

Here’s the said message Trail encrypted in the cipher described on the sheet: 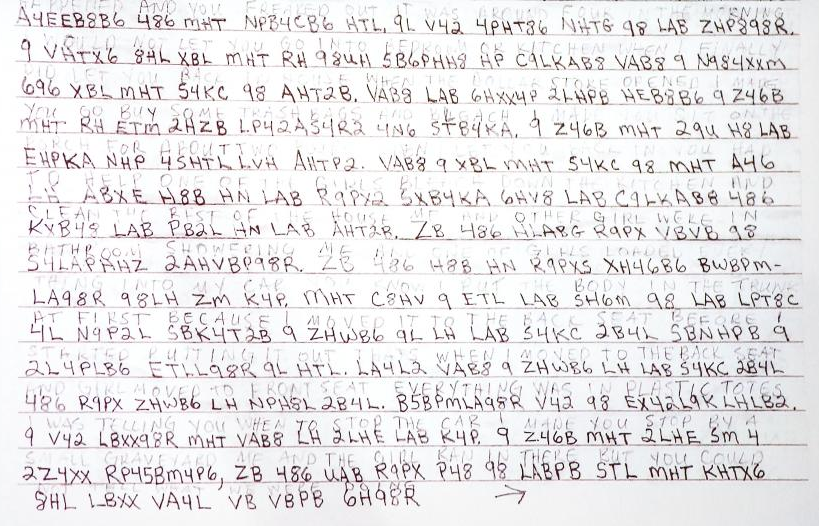 The plaintext is written above the ciphertext, but it’s hard to read.

According to an FBI agent mentioned in the article, encrypted letters sent by Trail showed that he wanted to be portrayed as the villain while Boswell told investigators she was forced to participate.

The FBI agent spoke of letters (plural), which means that the message shown above is probably not the only one Trail created. It goes without saying that I would like to see the other encrypted note of this kind, too. Perhaps, a reader can find them somewhere online.
Follow @KlausSchmeh

Further reading: A gang codebook found in a former prison