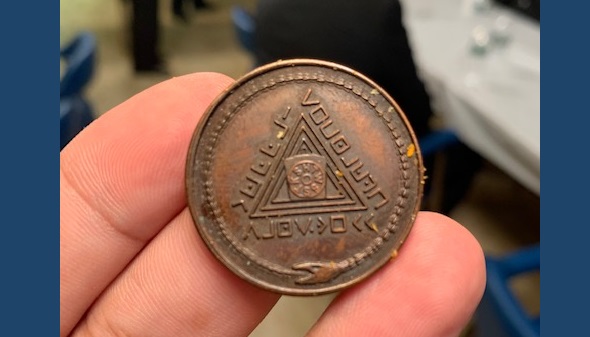 My friend George Keller has provided me pictures of a coin that bears an encrypted inscription. Can a reader decipher it?

George Keller from New York state is a friend of mine and a reader of this blog. The following picture shows him in Bletchley Park together with Winston Churchill: 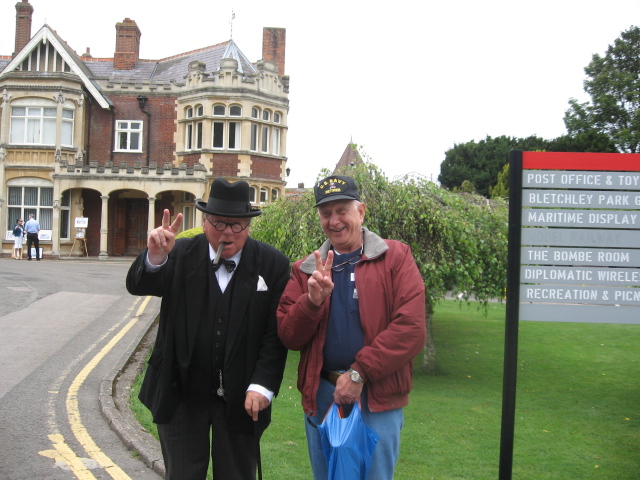 While the Mr. Churchill on this photograph might be a fake, the following Freemason coin George informed me about is definitely genuine: 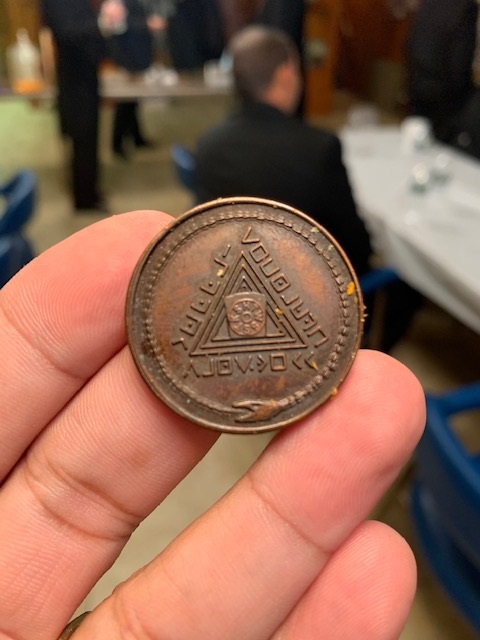 The coin stems from the Wellington Mark Lodge No. 1678 in Whitehaven, Cumbria. This Freemason lodge closed in January 2018. The rear side of the coin is not relevant for us: 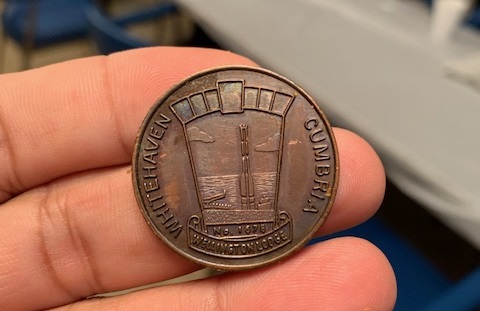 As can be seen on the first picture, the said coin bears two cryptograms. In the middle, eight letters are written in a circle:

According to a website I found, these letters stand for “Hiram, Tyrian, Widow’s Son, Sent to King Solomon”. These words refer to a certain Hiram, who was allegedly the chief architect for the Temple of King Solomon.

And then, there is a pigpen message on the coin. It consists of 21 symbols written around a triangle. The pigpen cipher, which has always been popular among the Freemasons, is based on a diagram like this:

There are numerous variants of this scheme. For instance, the order of the letter in the four grids can be changed. Among other things, postcards were sometimes encrypted in a pigpen cipher: 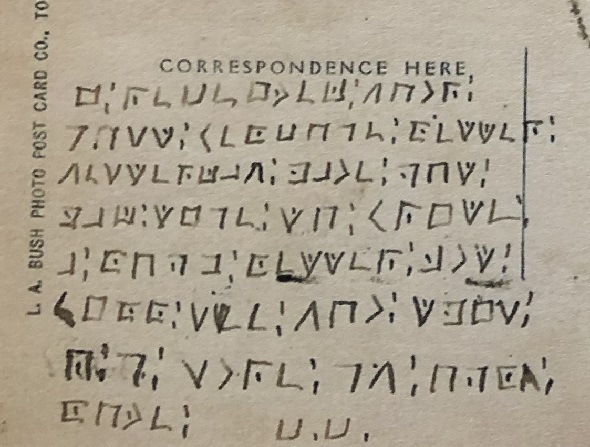 As pigpen ciphers are simple substitution ciphers, it is usually possible to break them, even if it is not known which of the many variants has been used. Frequency analysis and word guessing are the tools of choice for such a task.

However, in this case things are a little more complicated. The message on the coin consists of only 21 symbols, which is not enough to identify letters by their frequency. In addition, the start of the message and the word boundaries are unclear.

My guess is that we need to read the upper left part of the message first and that the five symbols of this part represent the first word, followed by a hyphen. We need to continue with the upper right segment, which consists of eight letters. Finally, we need to read the eight symbols of the bottom line (from right to left?). The period in the middle of this line indicates that we are dealing with two four-letter words.

I don’t know if my interpretation is correct. It mightas well be necessary to read the bottom line upside-down.

According to a Freemason George asked, the two passages on the slopes of the triangle use the same key, while the line at the base uses a different one.

Can a reader decipher this pigpen message? George Keller and I would be interested in learning about the plaintext.
Follow @KlausSchmeh