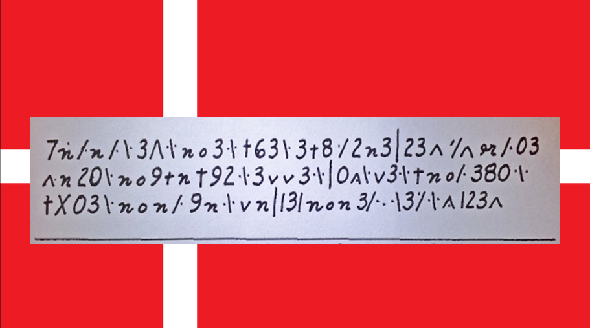 50 years ago, an encrypted text was found in a Danish military museum, about the background of which hardly anything is known. My readers have not been able to solve the “Copenhagen cryptogram” either. Will it perhaps succeed now?

Today I would like to start by pointing out a video. This one is about the encrypted letter from the Utah War (1858) that I blogged about late last year. Adam Sampson and Matthew Brown solved it at that time.

Ken Alford, who provided me with the letter, gave a presentation on it at the Utah State History Conference with Bill MacKinnon. The following video has that presentation (I am thankfully mentioned in it starting at 32:15):

Let’s move on to another topic. Sometime after World War II – probably in the late 1950s – an employee of a military museum in Copenhagen, Denmark, came across a slip of paper with three lines written on it. This note was on the back of a painting from 1835, which showed a Danish general. The three lines were in code.

The military museum could not do anything with the cryptogram. So they sent it to the American Cryptogram Association (ACA), the world’s most important association of amateur cryptologists. However, no one there found the solution. Unfortunately, I don’t know how much effort was put into the encrypted message at the ACA. In particular, I don’t know if anyone at the ACA is familiar with the Danish language.

In 2015, blog reader and ACA member Kent Ramliden – a Swede living in Florida – informed me of this puzzle. I referred to it as the “Copenhagen cryptogram.” Here it is:

Unfortunately, almost nothing is known about the background of the Copenhagen cryptogram. The message must have nothing to do with the pictured general (whose name I unfortunately don’t know either). Presumably the note is much younger than the picture where it was found.

The writing doesn’t look particularly old to me. I would rather guess the time after the Second World War. However, I am not a handwriting expert.

I have blogged about the Copenhagen cryptogram twice before, in 2015 and 2017. There were interesting comments from my readers, but no one found the solution.

Several readers confirmed that it could be a simple letter substitution – exactly what you would expect at first glance. The number of different characters is 25, which confirms this hypothesis.

The long vertical stroke, which occurs three times, could separate sentences. Accordingly, the text would consist of four sentences. Unfortunately, there are no spaces to be seen.

It is noticeable that there are hardly any letter duplications in the text. Perhaps the author has written double letters only single, or there is a doubling sign.

It still seems to me most likely that the text was encoded with a single letter substitution. Presumably the language is Danish, but this is not certain.

I would be pleased if my readers would take another look at this cryptogram four years after the last article. I still assume that it is solvable.