StartseiteCipherbrainAn encrypted (?) inscription on a building in Cologne 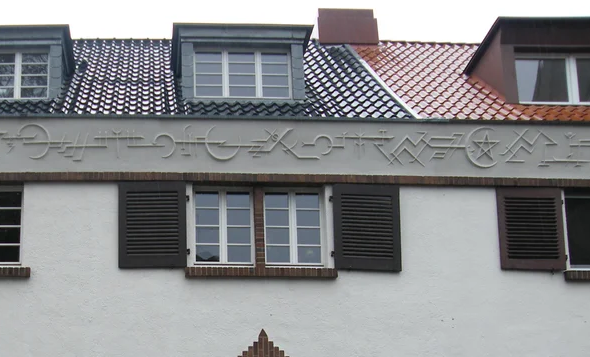 An encrypted (?) inscription on a building in Cologne

A coded message or just decoration? Maybe my readers can say something about this sequence of symbols on a building.

I’ve come across many an interesting crypto puzzle on Reddit. Blog reader Christine Hampel recently drew my attention to a case discussed there that I didn’t know about. This one was published two years ago, and apparently no Reddit user has been able to contribute to the solution yet. Perhaps my readers will be more successful – though it is far from certain that there is a solution at all.

The crypto puzzle in question is an inscription on a frieze under the roof of a house. It can be seen here (the photo is pieced together from two pictures, but the inscription should be correctly depicted):

The building is located at Guillaume Street 23 in Cologne. Here is the inscription in detail:

The first question is whether this is an encrypted message or just decoration. On Reddit, the opinion tends to the latter. If there is an encryption after all, the alphabet is quite large, because there are hardly any repetitions. However, it is also possible that only a part of the row of symbols is relevant.

If it is not a coded message, the symbol sequence could have to do with a house mark, as seen here.

So-called “asemic writing” is also mentioned on Reddit as a possible explanation. This refers to writing text with symbols without meaning. I didn’t know this expression until now. Apparently, however, there are several artists who have created asemic texts, including entire books. Perhaps the Voynich manuscript should also be seen in this context.

Finally, a Reddit user posted a picture of a school entrance in Lithuania. On it, a similar inscription can be seen: 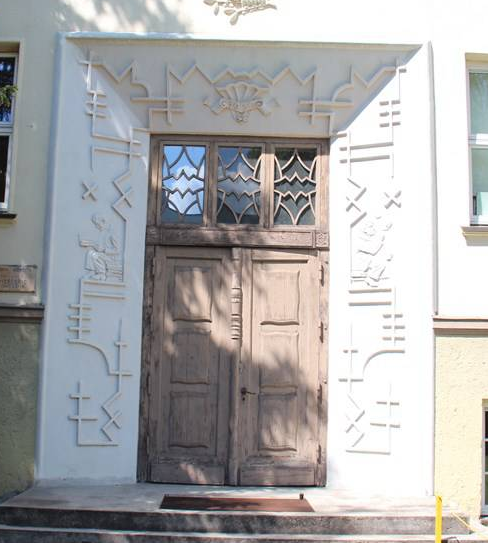 I have included the two buildings in the Cryptologic Travel Guide. Can any readers say more about these cryptograms?