StartseiteCipherbrainNorbert Biermann is the new bearer of the Friedman Ring 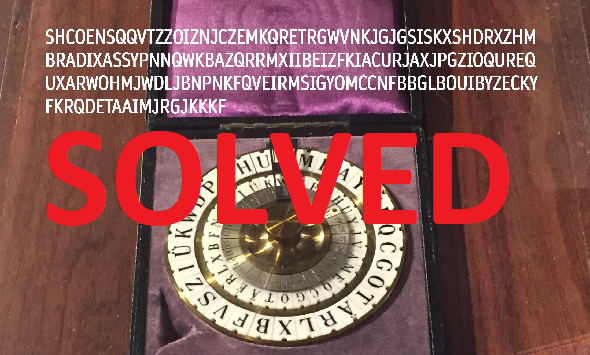 Norbert Biermann is the new bearer of the Friedman Ring

Norbert Biermann has solved the challenge of George Lasry. He is thus the new bearer of the Friedman Ring.

All previous winners can be found on this website.

In the meantime, the fifth round of the game has been completed. The puzzle came from George Lasry. Norbert Biermann was the first to solve it. Thomas Bosbach also made a big contribution to the solution. George and I therefore considered handing over the ring to both of them. Thomas, however, has modestly – with reference to the rules of the game, which say that only the solver gets the prize – renounced of his own accord.

Norbert Biermann is thus the new bearer of the Friedman Ring. It should be mentioned once again that Thomas Bosbach did important preparatory work. Narga’s comments were also helpful. Congratulations all three and to all others involved!

George had created the following Challenge: 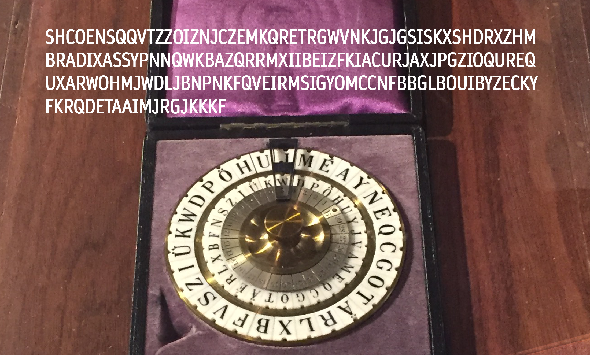 It is a text that George encrypted with a Wheatstone disk.

Norbert has thankfully sent me a detailed description of the solution and how to solve it. Here it is:

First of all, thanks to George for this nice and cleverly chosen challenge! When it came out, I transferred the principle of the Wheatstone device into a C++ program and tried to find a solution via hillclimber. Honestly, if Thomas hadn’t come up with the isomorphs, I’d still be doing that! But with Thomas’ discovery, I quickly realized that

My lists of possible ciphertext alphabets were computer-generated. The used algorithm is a recursive function: It is launched with a fixed initial letter ‘a’ (since the rotation of the alphabet has no influence on the solution path, one position can be set arbitrarily). Then the function decides which letter it will take care of next and moves it to position 2, 3 and so on until the last position. Each time it checks if the conditions defined by the isomorphs are met. If no, the next position is tried. If yes, then the function copies its current state and calls itself to process the next letter on the copy. If there are too few constraining conditions, this program will run for some million years, but beyond a certain limit it goes quite fast, and so it did in this case.

But then a serious problem arose concerning the possible ciphertext alphabets. Let’s take the following example:

Using this alphabet, the following MASC is derived from the original ciphertext:

which reads at the three isomorphic places made out by Thomas:

It can be seen that the isomorph conditions are not sufficient to obtain a MASC that has equal symbols at the three positions (which is our crucial assumption!).

At first, this seemed to be good news: The many candidates for ciphertext alphabets must not only meet condition A (isomorphs), but also condition B (derived MASC must yield identical letters at all three positions). This was going to shorten the list a lot!

I worked condition B into my program – and now the issue came to light: of all 576 candidates for the ciphertext alphabet resulting from condition A, none could also satisfy condition B at the same time. The shortlist had shrunk to 0 candidates. Narga had apparently encountered the same problem at about the same time.

My thought now was that maybe the plaintext was not exactly the same in the 3 isomorphic places. Therefore, I tried to gradually loosen the isomorph conditions by taking out letter triples that appeared only once.

This resulted in the impressive number of 14,999,040 possible ciphertext alphabets, of which 14,474 also fulfilled condition B.

I had the computer sort the resulting 14,474 MASCs in descending order of IC. Thus the following alphabet came on top:

with the following derived MASC:

and an IC of 0.061. This IC seemed too low to me, because my prepared corpus has an IC of 0.073. So I did not pay any further attention to this result and decided to investigate further, where on earth I could have made my mistake.

Then I noticed a detail. The MASC, which I had classified as incorrect, had an unexpected peculiarity: The repetitions of the long sequences seemed to start already from the first position in the text (“_siqsix … _siqsix …“), not only from position 3. Like Thomas (see the end of comment #23), I had assumed that the first two letters would not belong to the repeated sequence. Now it dawned to me that this is not necessarily the case, indeed that a repetition right from the beginning is more likely. But if my “wrong” MASC has already incorporated that, then maybe it’s not that wrong? A quick try with CryptoCrack yielded snippets of words that pointed to “Wheatstone”. This was very encouraging, and so I made a pen-and-paper attempt that got this far (and surprised me by the lack of word separators which I hadn’t anticipated at all):

After a short internet research I went for “attracted considerable interest” in the middle part (see here: http://www.jproc.ca/crypto/wheatstone.html) and posted my solution.

Ring free for the next round

At this point once again best thanks and congratulations to all participants!