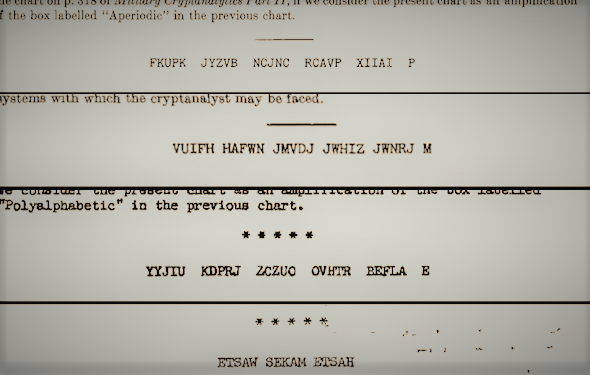 Lambros Callimahos (1910-1977) was a musician and NSA cryptologist. He smuggled a short encrypted text into each of his three most important books. To my knowledge, these cryptograms are still unsolved.

Music and cryptology obviously go very well together. Readers of this blog include, for example, music professor Norbert Biermann (here is an interesting article mentioning him) and Peter Krapp, a musician and musicologist. The violinist Stefan Krah set up the M4 project, which solved several Enigma radio spells by distributed computing. The composer Edward Elgar also had an interest in encryption technology and (allegedly) left behind a cryptogram that is still unsolved today.

The most extensive and impressive series of encrypted postcards that I know of is by the Austrian musician Josef Fröwis. It comprises 44 cards written in a musical note cipher. 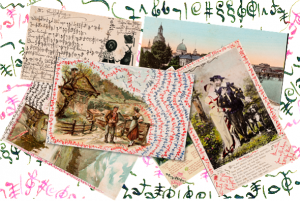 Number two in this section are the 35 postcards by Albert Pohrt, also encrypted – he too was a musician and used a musical notation secret. 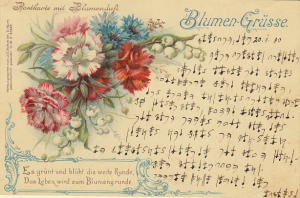 Another musician who made special contributions to cryptology was Labros Callimahos (1910-1977). The Greek-born US-American made a career as a flautist before the Second World War. He first played in Munich and Vienna and was appointed professor at the Mozarteum in Salzburg. Later he was also active in the USA.

In 1941, Callimahos joined the US Army and began his career there as a cryptologist. This led him to the NSA after the Second World War. Callimahos is best known today as a didact in cryptology. He developed a series of encrypted texts that simulated the exchange of messages during an attack on the fictitious island of Zendia. These cryptograms, now known as the “Zendian Problem”, played an important role in the training of NSA cryptologists. They have since become popular as a challenging series of puzzles. In 1976, a year before his death, Callimahos retired.

Callimahos also wrote the three-part work Military Cryptanalytics, about solving ciphers (he planned several more parts but was unable to complete them). His colleague William Friedman collaborated on the first two parts. The third part of Military Cryptanalytics was not released to the public by the NSA until December 2020. You can download it here. Some passages are blacked out. Internally, this book was published in October 1977, exactly the month Callimahos died.

Three cryptograms and a fourth

Blog reader Richard Bean has thankfully pointed out to me that there is a short encrypted text at the end of the last chapter of “Military Cryptanalytics” (Part 3): 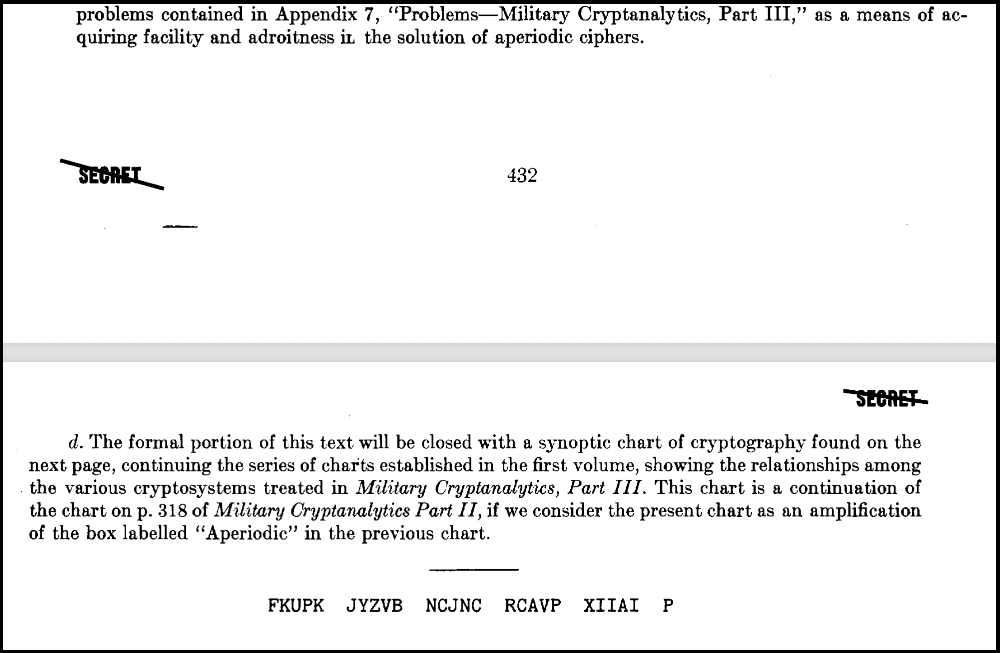 This cryptogram has 26 letters. The horizontal line above it separates it from the last chapter of the book. It is followed by several appendices. The text before and after it makes no reference to this sequence of letters.

Richard Bean came across this crypto-puzzle in a 2004 publication of the Association of Former Intelligence Officers (AFIO). Apparently Charles Varga, who was going to write a biography of Callimahos but which never appeared, knew the cryptogram even then, although the book was still classified at the time. Varga also reported that the first two parts of Military Cryptanalytics also contain an encrypted text. These messages are at the end of the last chapter in each case, consist of 26 letters each and are not referenced in the book text.

A look at the first part (1956 edition) confirms this observation. There I found the following cryptogram:

The cryptogram is also easy to find in the second part: 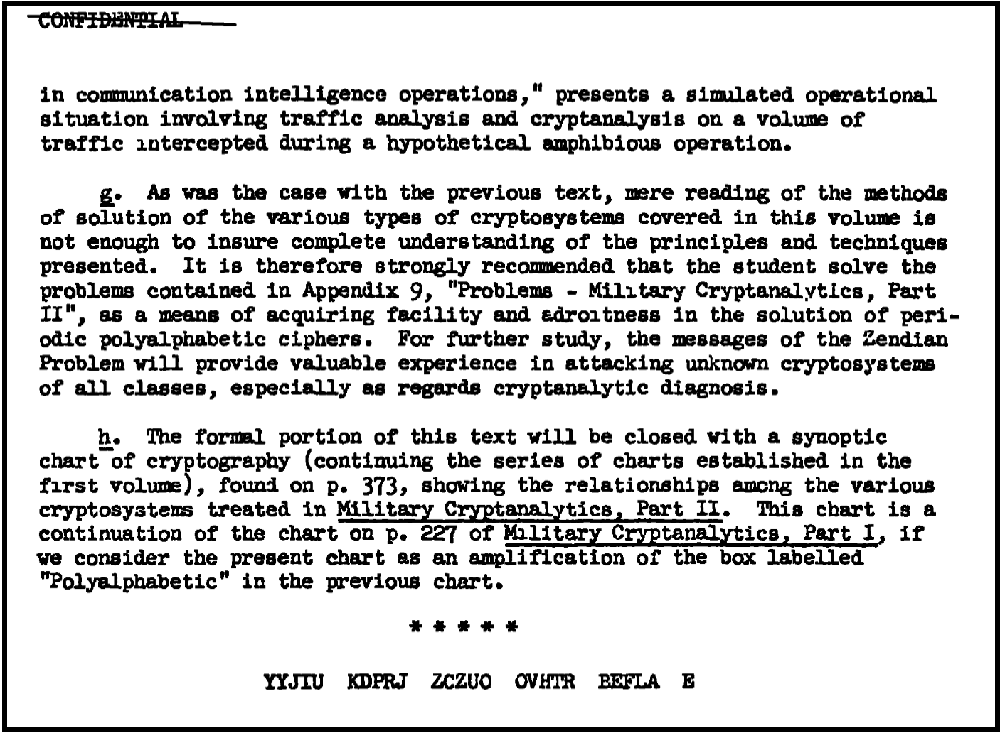 Here is the complete list of the three cryptograms:

To my knowledge, the solution to these three lines is not yet known. Can a reader crack these lines?

During my research, I also came across an earlier version of the first part of “Military Cryptanalytics”. It dates from 1952, and there is also a cryptogram in the same place, but it does not fit into this series and consists of only 15 letters. Apparently Callimahos replaced it in the later edition. Here it is: 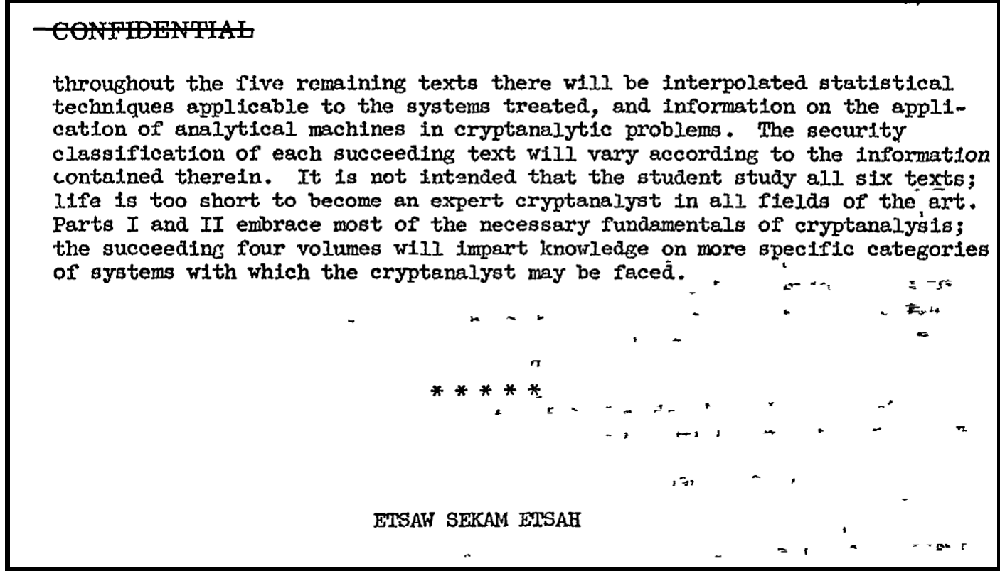 Anyone who figures out the solution is welcome to post it as a comment. Spoiler: It’s not quite as difficult.