StartseiteCipherbrainUnsolved: A coded message from the Resistance during the Second World War 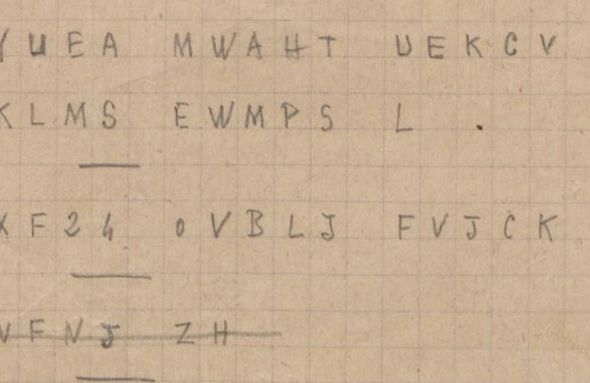 Unsolved: A coded message from the Resistance during the Second World War

Around the year 1944, a French agent sent a coded message. Can a reader decipher this message?

Thanks to Google, I came across another interesting website. It is called “Musée de la résistance en ligne” (“Résistance Museum online”) and is dedicated to the Résistance, i.e. the French resistance movement against the German occupation during World War II.

It goes without saying that within the Résistance, encryption was often necessary to protect secret messages from the German occupiers.

The website in question includes an online archive in which several encrypted texts are available. Mostly there is no information about the plaintext and the used encryption methods. I therefore assume that these messages have not yet been decrypted. It looks like I can write several Cipherbrain articles about this material.

Today’s article will be about the encrypted message of an agent of the “CND-Castille”. As I read up on Wikipedia, the CND (Confrérie Notre-Dame) was an intelligence service that, as part of the Résistance, provided war-related information to the French government-in-exile under Charles de Gaulle in London during World War II. After a betrayal, the CND was briefly crushed, but was subsequently rebuilt under the name “CND-Castille.”

The following encrypted message can be found in the said online archive:

The message is not dated, but may have been written around 1944. According to the archives, it was written by an agent of the CND Castille in the Tours area (eastern France). I do not have any further information about it. In particular, I know nothing about the plaintext or the encryption method.

The message consists mainly of letters, but there are also numbers. As things stand, French is the most likely plaintext language.

Since the numbers always occur in pairs or triples, I suspect that letters were encrypted by letters and numbers by numbers.

It should not be a transposition cipher, the vowel portion is too low for that. In addition, the letter W, which is rare in French, occurs very often.

It is also unlikely to be a playfair cipher, since there are some letter duplications.

Is it perhaps a simple letter substitution? Or a Vignère cipher?

Perhaps a reader can find out more. I will gladly accept comments.