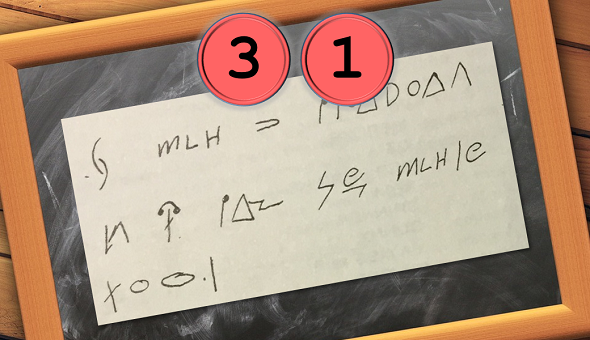 A young man, who had disappeared from his home in California, sent an encrypted message from Israel to his parents. This cryptogram has been unsolved for over four decades. Can a reader decipher it?

The cryptogram I am going to present today is mentioned in only source I am aware of – on the title page of the Jan-Feb 1976 edition of the magazine Cryptogram, published by the American Cryptogram Association (ACA).

Here are the four paragraphs from the Cryptogram describing this encrypted note:

About 2 years ago a young man left home. He had not been heard from until October, when his mother received the enciphered message traced above. It has been forwarded to us [the ACA] for help in reading it.

The envelope was typed neatly and correctly except for a lower case “a” in “Apt.” and “Avienda” or “Avenida” (California-Spanish ”Avenue”). In place of the return address there was the single word “Milestone”, typed, which the parents believe has something to do with the content, possibly indicating that he has “passed a milestone” in his life. The message was written in ball point pen on a strip of paper, torn or cut from a larger sheet (worksheet?). MLH are the mother’s initials. There is no hint as to why he wrote in cipher; he had not shown any interest in cryptography that they know of.

The author was born Nov. 19, 1954. He had been a programmer and electronic circuit designer. He was badly injured in an industrial accident, recovered, and was again injured in an auto accident in which two friends were killed. Prior to these accidents he had been interested in American history. As he recovered he became interested in parapsychology, religion, and astrology.

The only other trace of his wandering is the record of a check cashed last February in Paris. He seems to have disposed of his possessions, returning items to friends, etc. this message was sent from Israel be Air Mail.

And here’s the cryptogram:

To my knowlege this encrypted note has never been deciphered. Although it represents a note-worthy mystery with an interesting background story, this note has never received much attention in the crypto literature.

Many ideas but no solution

I published my first blog post about the MLH cryptogram last year in April (in German). Some readers posted interesting comments:

Tobias Schrödel contacted the ACA and asked if anything new had been found out since 1976. Apparently, this was not the case.

Of course, there is also the possibility that the MLH cryptogram consists of meaningless symbols. Maybe the sender wanted to confuse his parents. However, this hypothesis is hard to prove.
Follow @KlausSchmeh