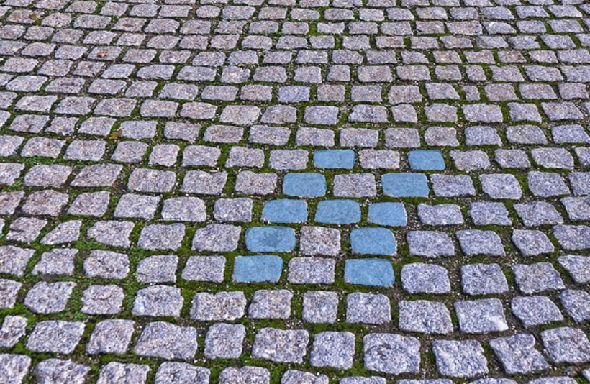 A hidden message has been found on a paved square in Steyr, Austria. Now, the creator of this steganogram has to cover the costs for removing it.

Earlier this week, I reported on hidden messages in tombstone inscriptions. Blog reader Robert Latzin from Austria has now made me aware of another object that bore a steganographic message: the pavement of a central place in Steyr, Austria. Of course, I would have liked to include this steganograpic sight in my Cryptologic Travel Guide, but apparently the message has been removed after it was discovered.

The story began, when the city administration of Steyr, Austria, decided to renew the pavement of a public area in the citiy center. This project was surveyed by a city servant named Franz-Michael Hingerl, who also is a member of the city council. As it seems, Hingerl is a friend of steganography (perhaps, he has read my book Versteckte Botschaften), and so he decided to hide a message in the new pavement. He instructed the road workers to encode seven letters with cobblestones: H, I, N, G, E, R, and L. As these characters were spread on a distance of 50 meters, it was not easy to see that they spelled out the surname of the city servant.

For copyright reasons, I can’t include a picture of the message here. However, there is one available in this article published by the Austrian newspaper Der Standard. This article contains a hidden message, too, by the way. Can a reader find it?

In my view, it was a great idea to hide a message in the pavement of a public area. I’m sure, many steganography enthusiasts would have visited this place to see the inscription. However, the Steyr city administration was of a different opinion. Steyr’s mayor Gerhard Hackl even stated: “It’s like the prank of a twelve-year old – completely stupid”. He immediately ordered the removal of the steganogram. As it seems, Franz-Michael Hingerl will have to cover the costs for this work.

I hope, the removal of the message won’t be too expensive. After all, Mr. Hingerl has written steganographic history. The city of Steyr should thank him for this.
Follow @KlausSchmeh