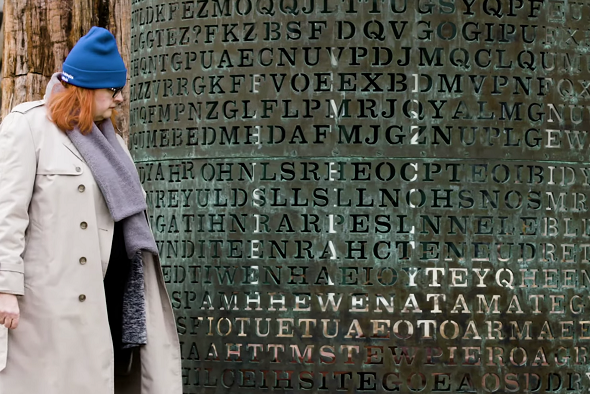 In March, I blogged about a TV documentary about the Kryptos sculture produced by CNN. It has now aired and is available on Youtube.

Frequent readers of this blog certainly know Elonka Dunin, the world’s leading expert on the Kryptos sculpture and it’s encrypted inscription. Elonka maintains a website titled Famous Unsolved Codes and Ciphers, which lists about a dozen unsolved mysteries from the world of cryptology and ancient languages. This page is the oldest of its kind.

Contrary to this blog, Elonka’s page also covers non-cryptologic language mysteries, such as the Indus script and the Rongorongo script. All other topics mentioned in Elonka’s list have been discussed on this blog before – including the Voynich manuscript, the Zodiac Killer, the Dorabella cipher, and, of course, part 4 of the Kryptos inscription.

Yesterday, Elonka hosted a so-called “Ask me anything” (AMA) on Reddit. An AMA is an online chat everybody can take part in. The rules of an AMA are quite simple: every participant can ask any question he or she likes; the host gives answers.

The minutes of Elonka’s AMA session are available on Reddit. Altogether, there were 747 comments by Elonka and the participants. It comes as no surprise that many of the questions asked were about Kryptos and other crypto mysteries. Here are a few examples:

Rqoo51: {…] how are we sure the guy that designed the [Kryptos] puzzle didn’t mess up when encrypting the message and it in fact won’t translate back to plaintext? Like has someone else in the CIA being told the solution?

Elonka: My belief is that he intended it to be solved, with an English plaintext that’s 97 characters long (and has BERLINCLOCK at the 64th position). However, to my knowledge, no one has ever tested his solution, so it’s entirely possible that it has some mistake or impossible-to-reproduce method. I think our best shot at solving it will be to try to replicate his method of pencil-and-paper matrices that he used for K1-K3, and then try to think like an artist, what might he have done to “make it harder”, like by folding a page, flipping it over backwards, or something like that.

veggiekid23: What’s something no one has asked about yet that you really want to talk about?

Elonka: One other thing, the cipher that I found on the Friedman Tombstone at Arlington National Cemetery, I was very proud of that!

Elonka: Well, I’d love to get Kryptos K4 off my plate! It it were solved, I’d probably turn my attention to Edward Elgar’s Dorabella Cipher, I think that’s the next one most likely to be solved, as opposed to being a deliberate hoax.

domino7: What are the odds that the various parts of Kryptos, when decoded, will in turn be part of a fifth meta-code?

Elonka: Very high. Sanborn himself has said that even once K4 is solved, there will be a further mystery to be solved. He has said many times that one of the points of artwork is to hold someone’s attention. If everything about it can be absorbed rapidly, with nothing new to learn, then he feels that the artist has failed.

A Kryptos TV documentary on CNN

In March 2019, I published a blog post about the prodution of a TV documentary about Kryptos. It comes as no surprise that Elonka took a leading role in it. Among the other people shown in this program is blog reader Richard SantaColoma from New York State. A few days ago, the documentary aired on CNN. It has since been made available on YouTube. To my regret, it lasts only a little more than six minutes. Here it is:

This video has already received over 1.1 million hits on YouTube. That’s a lot.

When blog reader Michael Hörenberg watched this video, he found the following quote of Kryptos creator Jim Sanborn especially interesting (4:25): “So if one invested a lot of time in the environment around KRYPTOS that would be kind of silly.” If this statement is correct, the search for clues at the sculpture and around it – a difficult task, as Kryptos is not accessible to the public – is a waste of time. More insights in the Kryptos mystery might be available soon: Jim Sanborn recently announced to give a new clue.
Follow @KlausSchmeh