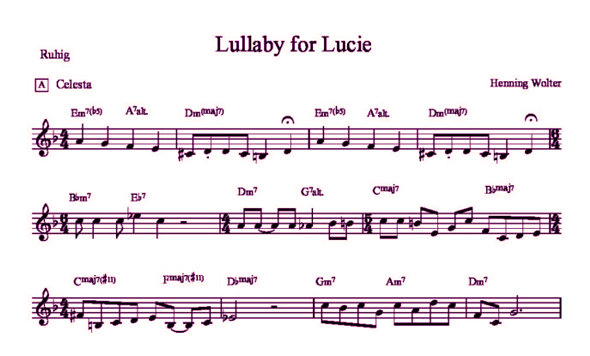 Blog reader Henning Wolter is a successful jazz musician. He has now launched a competition on his website. Of course, it’s about encryption and music.

There are and were a surprising number of musicians who were interested in cryptology. One thinks, for example, of the British composer Edward Elgar (1857-1934), to whom the Dorabella cryptogram goes back. Or the musician and NSA cryptologist Lambros Callimahos (1910-1977), from whom I have already presented several puzzles on Cipherbrain. Or to the violinist Stefan Krah, who was the first to solve Enigma radio spells with computer support.

Of course, there are also some musicians among my blog readers. Among them is Norbert Biermann, professor of music in Berlin, who has cracked many a cryptogram on Cipherbrain. Another representative of this field is jazz musician Henning Wolter, who is also active as a puzzle designer on MysteryTwister C3 (see here and here). If I’m not mistaken, I also once blogged about one of Wolter’s sweepstakes, but that was in the early weeks of my blogging career and so is not archived.

The focus of “Double Bottom” is the question, which has been known for centuries, how to encode a message in musical notes. This is basically not difficult, but a simple code almost inevitably leads to pieces of music that sound quite strange. So you have to think of something more clever if you don’t want the thing to be immediately obvious. A nice example is a string quartet with a hidden message that I featured on my blog in 2017. Here’s the video that goes with it:

Henning Wolter wrote me: “Exactly this problem appealed to me very much, and as a result I developed an encoding method which gives the composer more freedom, so that it is more possible to create catchier compositions from the resulting sound material.”

“Double Bottom” has been accessible since September 15 via the website https://www.henningwolter.de/double-bottom. There you can listen to a composition by Henning Wolter in which a secret message is hidden. The corresponding sheet music is also available there. The following image shows an excerpt:

There are also some clues on the website, but they look pretty puzzling on their own. Possibly it is a rebus: 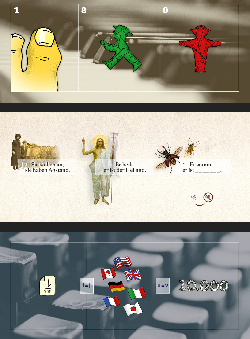 The first ten participants who send Wolter the correct solution will receive a CD of the Henning Wolter Trio. Participation is free of charge. The project was supported by an artist grant within the framework of the NRW-Corona-Hilfen.

If you have any ideas for solving the puzzle, please feel free to write them in the comments field.