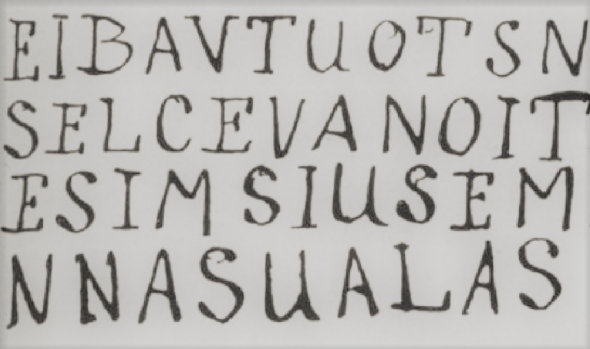 A 1911 book about forensic science depicts a cryptogram. Can a reader solve it?

Encrypted messages related to crimes have always been popular on my blog. For instance, in my top 50 unsolved messages list, eleven entries have to do with murders or robberies:

In adition to these unsolved mysteries, there are plenty of solved cryptograms that are connected to criminal cases.

When I recently searched for “criminal cipher” on Google, I found a crime-related cryptogram I hadn’t known before. It’s contained in the 2015 book Devices of Curiosity: Early Cinema and Popular Science by Oliver Gaycken – not necessarily a work I would have consulted when looking for a ciphertext. On page 180, the following message is depicted:

This image is sourced to the 1911 French book Manuel de police scientifique (p. 105), which is availble in the Internet Archive. To my regret, no information is given about the background of the message.

As far as I see, the solution of this criminal cryptogram is given in neither of the two books. So, my original plan was to ask my readers if they can break this ciphertext. I supposed that the plaintext was French.

Considering that the Manuel de police scientifique explains simple substitution ciphers (MASCs) on the previous page, I thought that the message might have been encrypted in a MASC.

But then I realized that another encryption method was used. It’s a quite simple one, and so this cryptogram is easy to break.

So, even if you’re not an experienced codebreaker, you should try your luck on breaking this ciphertext. If you’re successful, please leave a comment.
Follow @KlausSchmeh