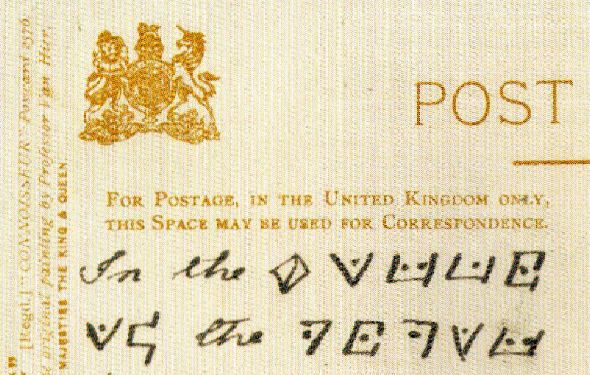 In 1905, a woman in Dorchester, UK received an encrypted postcard. Can a reader decipher it?

Five years ago, I blogged about two encrypted postcards from Dorchester, UK.

When I checked where in the United Kingdom Dorchester is located, I found that there are two places of this name: Dorchester, Dorset (19,000 inhabitants) and Dorchester, Oxfordshire (1,000 inhabitants). As the county of Dorset is mentioned in the address on both cards, it was immediately clear, which Dorchester was meant here.

Breaking the encrypted message on this card wasn’t very difficult either, as the sender had used the simplest of substitution ciphers: A=1, B=2, C=3, …

Another postcard from Dorchester

After the presentation Elonka Dunin and I gave in the ICCH forum two weeks ago, crypto collector Mark Baldwin thankfully provided me a scan another encrypted postcard from Dorchester. This one was written in 1905. Here it is: 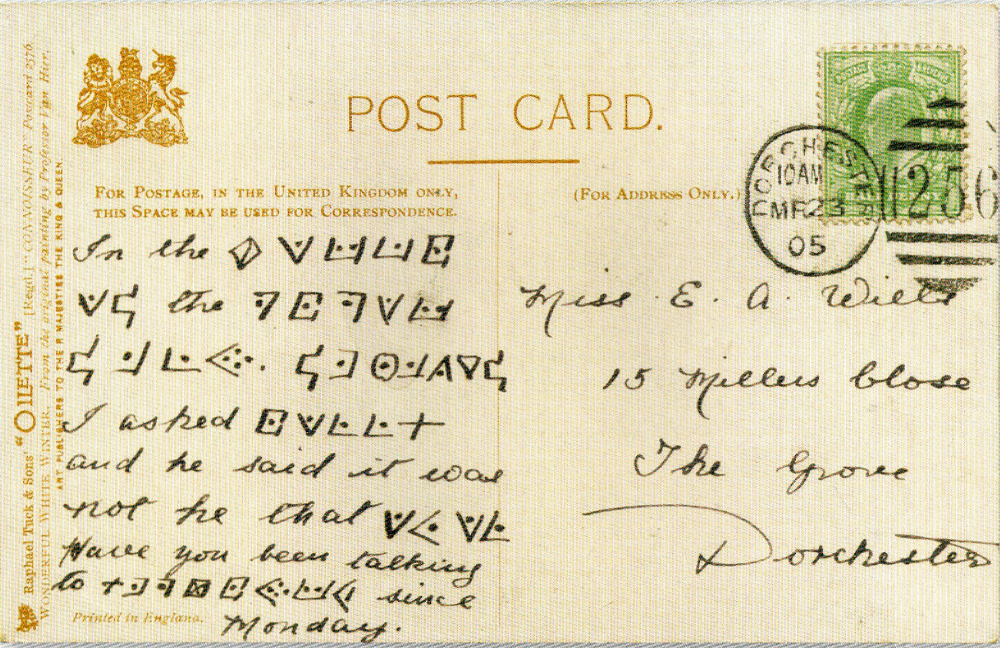 My first question again was, with which Dorchester I was dealing with this time. Considering that the one in Dorset is 19 times larger than the one in Oxfordshire, the a-priori probability was very high that the former was the one in question. My suspicion was confirmed when I read on Wikipedia, that an area in Dorchester, Dorset is named “The Grove”. This expression is mentioned in the recipient’s address.

My next question was whether there is any connection between this postcard and the two other Dorchester cards mentioned above. As far as I can tell, this is not the case. The recipient, the encryption, and the handwriting all are different.

How to solve it

The most important question is, of course, how this card can be deciphered. Mark Baldwin told me that he has solved many encrypted messages of this kind, but this one has proven particularly difficult. This is because the encrypted part of the text consists of only 40 letters.

The cipher itself is probably a simple letter substitution and a variant of the pigpen cipher. If enough ciphertext is available for analysis, such a method is usually easy to break – but this is not the case here.

Can a reader solve this crypto mystery anyway? Perhaps, it is possible to guess the word between “asked” and “and”. This word has the pattern 12334 and probably stands for a name. HARRY, NELLY, BARRY, and SALLY seem possible.