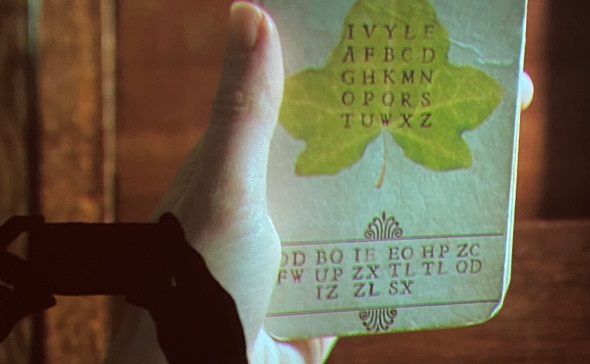 In the 2020 film “Enola Holmes”, several interesting ciphertexts can be seen. It is well possible that the producers took some of their ideas from this blog.

Yesterday, I watched the movie Enola Holmes, a thriller set in Victorian England. The plot is about a 16-year-old girl, who is the younger sister of Sherlock Holmes. When her mother disappears, she proves even smarter than her famous brother.

Three encrypted messages play a role in the plot of this movie. In addition, one scene briefly shows a cryptogram that appears to have no influence on what happens. In the following, I’m going to introduce these four ciphertexts.

Only a few minutes into the film, when Enola realizes that her mother is gone, the following ciphertext can be briefly seen: 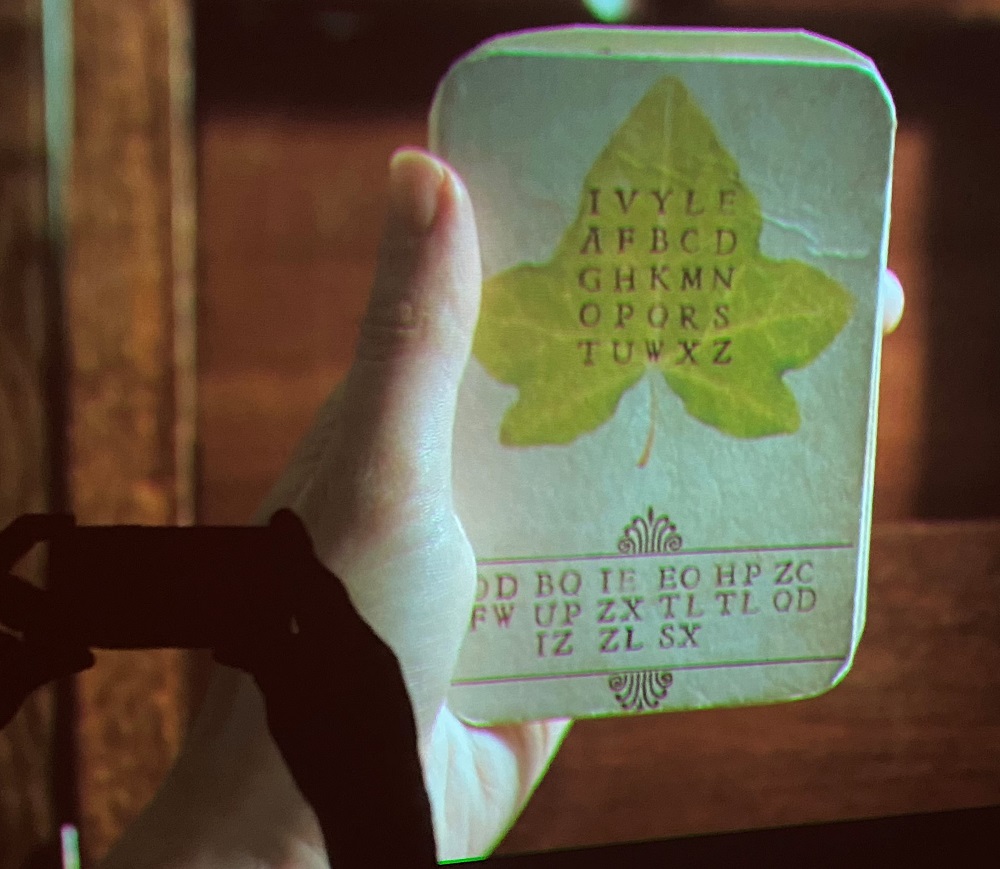 Apparently, it was Enola’s mother who created this message. As far as I can tell, this ciphertext doesn’t play a role in the plot, and the solution is not mentioned in the movie.

The table at the upper part of the sheet is probably a Playfair matrix created with the word IVY LEAF (note that each letter in the matrix appears exactly once, while the J is missing).

The letter sequence below the matrix could be a Playfair ciphertext encrypted with it. If this is the case, it should not be too difficult to solve this cryptogram. When I tried, however, I didn’t receive a meaningful result. Can a reader do better?

If you want to know more about the Playfair cipher, there is plenty of information about it on this blog. My readers have improved the world record for breaking the shortest Playfair message several times. My next book, Codebreaking: A Practicle Guide includes the Playfair, too.

The following message was left behind by Enola’s mother, too:

Enola has no trouble breaking this cryptogram. Can a reader decipher it, too? The encryption method used is a transposition cipher.

In another scene of the movie, Enola publishes an encrypted advertisement in a newspaper. As frequent readers of this blog know, this kind of secret communication was quite common in Victorian England. It is well ossible that the producers of Enola Holmes read about this topic on my blog. I have written at least a dozen articles about it. 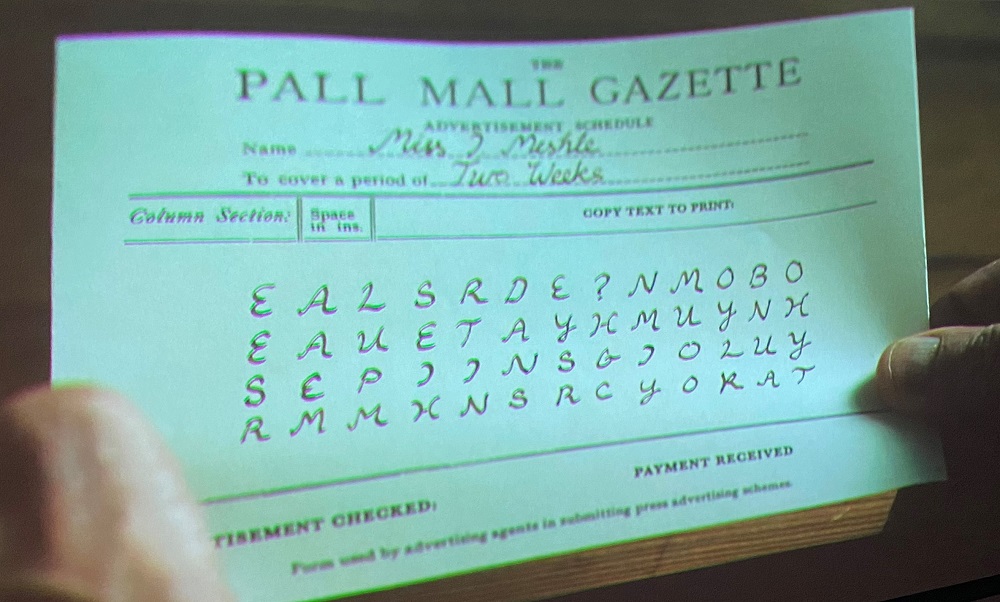 The following screenshot shows the plaintext:

Apparently, a transposition cipher was used here again. However, I don’t think that the method is explained in the movie in detail. Can a reader find out, what kind of transposition Enola employed?

The following newspaper ad is the reply Enola receives on her encrypted message: 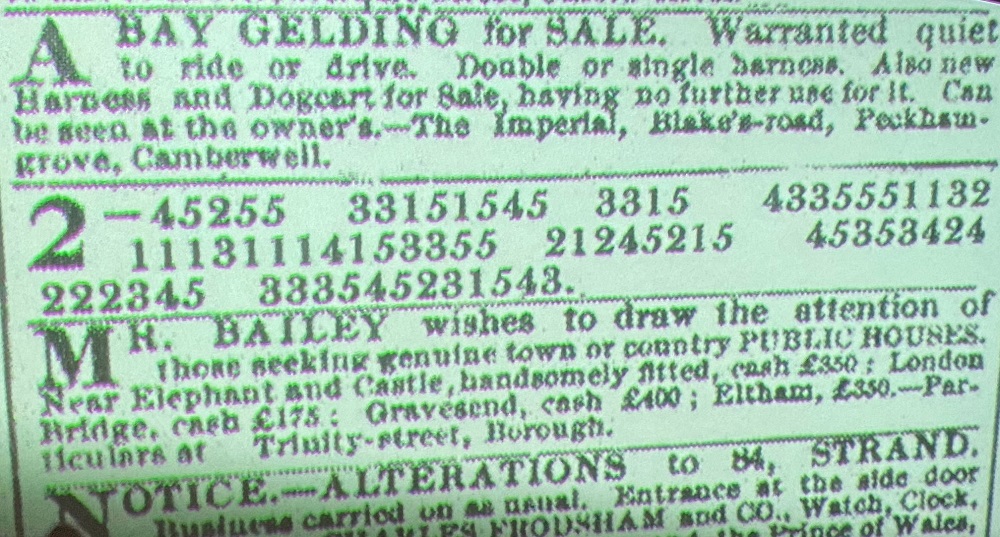 To solve this message, Enola uses the following cipher disk her mother has left behind: 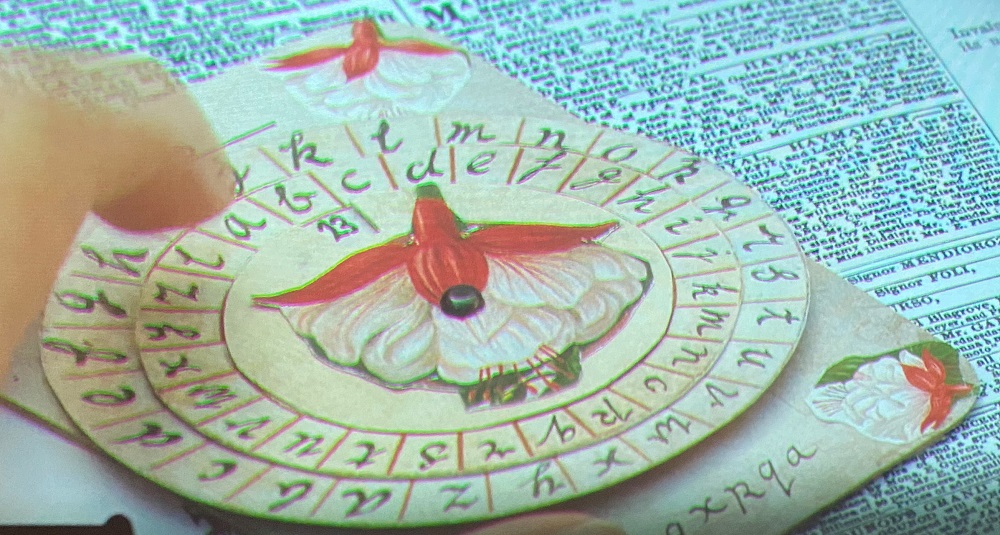 To my regret, I can’t see how to get from the ciphertext to the plaintext. Can a reader tell me how this works?

This second ficticious encrypted ad looks similar as a real one I covered on my blog in January 2019 (a few months before the film shooting started):

In my blog post, I not only introduced the ciphertext of this encrypted advertisement, but also the corresponding plaintext and the cipher method used. This is an exception, as I usually blog about unsolved encrypted ads, which means that I know neither the plaintext nor the encryption method in question.

Perhaps, the film producers read my blog post about this ad and decided to create a similar (ficticious) one for their movie. I would be very proud if this was the case.
Follow @KlausSchmeh